Lindsay Lackey is the author of All the Impossible Things (Roaring Brook Press), a Summer/Fall 2019 Indies Introduce middle grade selection and a Fall 2019 Kids’ Indie Next List pick. 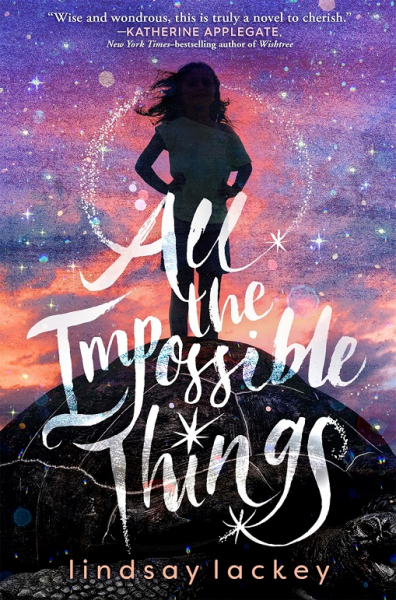 Lackey has worked in children’s and teen services at a public library and for a major publishing house in publicity and marketing. She has also trained as an opera singer. A Colorado native, she currently lives in the San Francisco Bay Area.

Pam Moser of Pacific Island Books in Thornton, Colorado, called Lackey’s debut “beautifully glazed (not frosted!) with magical realism that will keep you reading and wondering…is it?”

Said Moser, who served as a member of the panel that chose Lackey’s book for the Indies Introduce program, “As we sink into All the Impossible Things we find that Red has a secret that she is not ready to tell the world, but sometimes her life gets so out of control that she may not be able to hide it too much longer. She is off to yet another foster home and resigned to another bad experience, but what she finds instead is a cast of characters who hold her up and let her be who she is.”

Here, Moser and Lackey discuss the magic the author infused into her debut.

Pam Moser: Even though the magic in this story is talked about in the very first sentence, it is very sly at first — the reader is never sure if what’s happening is just in Red’s imagination, or if it’s real. Why did you decide to ease the reader into magic that way?

LL: The magic surrounding Red is a dominant part of the story, but since it is meant to be a reflection of her interior life, I didn’t want it to feel like a superpower so much as a mystery. I like that you call it “sly,” as that is what I was going for! Red is a kid who’s spent years forcing down her own emotions. She’s learned to hide, and she believes there’s safety in not revealing or talking about her feelings. Because of this, I wanted the magic to be sly, to leak out of her, hint at her increasing stress and inability to rein in her emotions. As the magic builds, we see that Red’s emotional life is building as well, that it is trying to burst out of her, but she continues to fear vulnerability. Ultimately, this isn’t a story about a girl’s magic. This is a story about a child allowing herself to feel the big, scary emotions, and learning how to keep those emotions from overpowering her life.

PM: How did you decide to use wind as Red’s “superpower”? 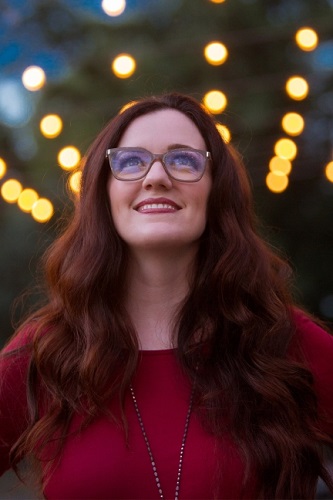 LL: The first thing I ever wrote with this book was the opening scene — a storm brewing outside while a little girl is being quietly kicked out of another foster home. That scene has changed very little from the initial draft, so I guess the decision to use wind was more instinctual than anything. But as I continued writing, I knew that wind was the right choice for Red’s magic.

Growing up in Colorado, I am very familiar with wind and the damage it can do. I remember being terrified during tornado drills at school, or seeing the way the hot, dry summer wind perpetuated wildfires. Wind is more constant than snow in the winter, and can be so bitingly cold that school might be delayed or canceled even if the sky is clear. So for Red, whose world is in constant flux, wind was the perfect metaphor. She feels as if she’s blown from place to place without any control, and the fear and heartache she faces can be terrifying. But, as she starts to learn, wind doesn’t always have to be bad. She has moments of joy with it as well — like flying kites with her mom. She learns to see complexity in her world, and comes to understand that something can be both good and bad, both necessary and painful, at the same time.

PM: Everyone needs a copy of Red’s notebook of “Impossible Things.” What was your inspiration, and what is your favorite (not) impossible thing?

LL: The inspiration for the notebook actually came from the book’s title. As I was drafting, very early on, I was suddenly struck by the phrase “all the impossible things,” and I knew it was the title of the book. From that, the idea that Red collected impossible things came together. It took several drafts to get the notebook and its origin just right — honestly, that was probably the hardest part of writing. But once I got it, everything clicked into place, and Red’s journal entries became essential signposts of growth along her journey.

I really enjoyed hunting for all the impossible things she writes about. The world is so interesting and bizarre and magical! I think my favorite (not) impossible thing has to be the science behind a bumblebee’s ability to fly. I had no idea how bumblebee flight worked when I initially put bees in Red’s journal, but when I researched and realized that they create their own vortices under each wing, it was one of those beautiful serendipitous moments in writing a novel that makes everything hum with joy.

LL: Ha! I think I still have edges and corners and curves to my soul. We all do, I imagine. I had a very different childhood than Red. My family is very close, and I always felt deeply loved and supported. But I definitely had big emotions and often felt like an outsider in many ways, especially at school. I think something I was always looking for was a sense of belonging within a friend group. Looking back, I don’t know why I felt like I struggled with this because I did have a lot of friends over the years. But somehow, I just felt like I didn’t belong a lot of the time, and that feeling of insecurity sometimes made me behave selfishly in my relationships. Growing up, I had to learn a lot of hard lessons about what being a good friend means, and how to recognize and set healthy boundaries within my relationship to others and my relationship to myself. I guess in that way, I’m very similar to Red — I needed to become comfortable with the curves and corners in my own soul in order to become a better friend.

PM: Do you believe in magic?

LL: I think it would be hard to be a children’s book writer — or any kind of writer, really — if I didn’t believe in magic. Even if magic doesn’t exist in the Hogwarts kind of way, I do believe it exists in mossy, damp forests dappled with golden sunlight, or along rugged coastlines buffeted by salty wind and the music of gulls and waves. For me, magic is in anything I find particularly beautiful or mysterious. I’ve felt the tickling magic of mysterious history while wandering around ancient stone circles in England, and I’ve heard the magic of beautiful music, tasted it in particularly delicious food. I’ve also seen and experienced things that I can’t explain. I think mystery gives life meaning and richness, and I am always open to embracing the questions, the miracles, the magic — even when they seem impossible.

Find out more about the author at lindsaylackey.com.