Maleeha Siddiqui is the author of Barakah Beats, a Summer/Fall 2021 Indies Introduce middle grade selection and a November/December 2021 Kids’ Next List pick. 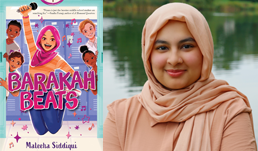 “Maleeha Siddiqui has written a joyful debut that features a diverse cast of Muslim characters headlined by a superstar in 12-year-old Nimra,” said Brein Lopez of Children’s Book World in Los Angeles, California. “Whether at her Islamic school or navigating the hallways of her new secular school, Nimra is a groundbreaking girl who just wants to shine her light and share her passions, which include art, her faith, and friendship. I loved her and her friends as they gave each other the chance to be their best selves.”

Maleeha Siddiqui is an American writer of Pakistani descent who loves to tell unapologetically Muslim stories for all ages. By day, Siddiqui works as a regulatory affairs professional in the biotech industry. She grew up and continues to reside with her family in Virginia. When she’s not working, reading, or writing, she likes to try new food and snuggle cats.

Brein Lopez: Barakah Beats is the story of Nimra, a young Muslim girl navigating her creative path through a new public school after years spent at an Islamic school. Nimra's world is engagingly filled with diverse Muslim characters who practice their faith in different ways. Why was it important to you to tell this collective story for young readers today of the varied faces of the Muslim faithful?

Maleeha Siddiqui: I grew up in a diverse area with people that came from all different kinds of backgrounds, including those in the Muslim community. I wanted to reflect that in Nimra’s story, especially since a huge part of Barakah Beats revolves around Nimra wrestling with her own faith. One that she shares with more than a billion people in the world. I don’t believe in one narrative speaking for an entire group of people, and I didn’t want readers to think that any one character’s opinions or way of life was universal or that it reflected all Muslims. It’s important that young readers understand the beauty in our diversity and how we should be respectfully navigating those differences in our real lives.

BL: Nimra's family is loving and encouraging to her for many parts of her life including her achievement as a hafiza, but they also have different expectations for her that don't mirror her own creative dreams. Was this an experience you have encountered in your own creative life?

MS: Absolutely. I wanted to be an author since I was 11 years old, but my immigrant parents didn’t think that was a viable career option. I know they wished that they could’ve supported me, but they were also being practical. They wanted to make sure that I wasn’t making a hasty decision — one that I would regret down the road. Time and money are precious, after all. I’m glad that I majored in the field that I did and I’m now happily working in it, but I also wish someone in my life had taken me seriously and had given me the confidence to pursue my writing dreams sooner. Now, I’ll be sure to do that with my own kids if they show an interest in a creative endeavor.

BL: Middle grade friendships in children's literature can be minefields of misunderstood signals, fearful silences, and blossoming interests. What was important for you in telling the story of Nimra and Jenna's long but newly changing friendship?

MS: Someone once told me that it’s not about how long you’ve known someone, but how well you know them. Nimra and Jenna have been friends for many years, but Nimra has kept a lot to herself, especially when it comes aspects of her faith. I think middle school especially is a time when we tend to filter ourselves both externally and internally to blend in. But no matter how hard we try to hold on to them, certain friendships do and will end. It’s heartbreaking to go through and I wanted to capture that to assure young readers it’s something that we all experience.

BL: Nimra struggles balancing her many loves: family, faith, friends, music, art, and school, but she delightfully and humorously perseveres to define her own identity in her own way. Why was humor an important element in telling Nimra's story to young readers?

MS: I didn’t intentionally set out to be humorous at first (I don’t think that I’m very funny!) The first couple of drafts of Barakah Beats held a more serious tone and I had to lighten it up. My vision was for Barakah Beats to spark joy and that wasn’t going to happen if Nimra was constantly stressing out and not letting herself go in some moments. Plus, who doesn’t love a healthy dose of humor?

BL: Barakah Beats is also the story of a band of middle grade musicians and friends who also happen to be Muslim. Did you have an experience of being in a band with friends? Did you have real life inspirations for an all-Muslim pop rock band?

MS: Nope! I’ve never been in a band with friends, unless you count middle school band where I played the flute for three years. As for real life inspirations — Deen Squad (who get a shout out in the book)! Deen Squad was more of a hip-hop/rap duo, but when I was coming up with the band in the book, I was like “Jonas Brothers, but make them all Muslim!”

Find out more about the author at maleehasiddiqui.com.