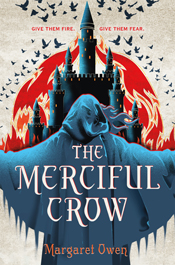 Margaret Owen is the author of The Merciful Crow (Henry Holt and Co. Books for Young Readers), a Summer/Fall 2019 Indies Introduce young adult debut selection and a Summer 2019 Kids’ Indie Next List pick.

“The world-building begins on page one of this excellent fantasy, which is full of action, adventure, and magic,” said Raissa Larson of King’s Books in Tacoma, Washington, who served on the bookseller panel that selected Owen’s debut for the Indies Introduce program. “Though set in a fanciful medieval world, the questions it poses are timeless: who is important, who does society value, and how do we live up to our potential? The Crows are fighting for survival and the stakes couldn’t be higher.”

Owen was born and raised at the end of the Oregon Trail, and she now lives and writes in Seattle. She earned a degree in Japanese and she raises money for social justice nonprofits through her illustrations.

Here, Larson talks to Owen about her debut.

Raissa Larson: Among the themes that emerge in The Merciful Crow are caste and status, who matters in society, and how hard it is to change people’s opinions, all of which are issues we wrestle with today. Do you have a desire to address contemporary issues in your work? Do you find that some themes unfold naturally? 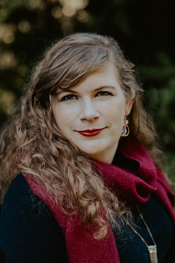 Margaret Owen: My general approach is to remember that it’s not necessarily the issues that are contemporary, but the discussions of them. As Fie puts it, they’re all different heads on the same monster: even today we’re revisiting old battles over income inequality, civil rights, and violent racism. When constructing a fictional society, I feel that we owe it to readers to examine the flaws in that society, how it privileges certain people over others, and why that is maintained. To gloss over those flaws, to shy away from criticisms of privilege and power structures, is to assume a certain degree of privilege in your readers.

RL: What appeals to you about writing fantasy? Do you like to write in other genres?

MO: I like the lack of limitations. If I wrote a mystery/thriller YA where the U.S. Secretary of Defense was a middle-aged woman, I’d get snotty e-mails about how unrealistic that is. In The Merciful Crow, the equivalent position is not only a middle-aged woman, but if I get any e-mails nitpicking that, the answer is, of course, “You found that part unrealistic, but not the mammoth she arrives on?”

I may dabble in other genres, but at least for now, fantasy feels like a good solid home for me. I get to make it exactly the way I like it.

RL: Do you read YA novels yourself as an adult reader? What does YA fiction offer to crossover readers?

MO: I absolutely do! YA has a ton to offer crossover readers. I think there’s this idea that when you turn 27 or 28, you should know what you want to do for the rest of your life. (Frankly, that idea’s probably a relic of the Baby Boomers.) If anything, I’ve found we are all works in progress; so much of our identities are living, changing things. YA captures a moment in time where our protagonist has to navigate claiming and asserting an identity, perhaps for the first time, and understanding what that means. I can’t think of anything more interesting!

RL: Who were your favorite authors when you were a teen?

MO: YA wasn’t quite the robust category in my teen days like it is now, so my options were limited, but I was very invested in Madeleine L’Engle, Gail Carson Levine, Garth Nix’s Abhorsen Trilogy, and various mythology and folklore collections. I’m fairly certain I passively stole The Watsons Go to Birmingham—1963 from my class library by virtue of…not returning it. I also tended to pick up fantasy books that were geared towards readers at least a decade older than me, so my Mercedes Lackey collection was quite formidable.

RL: Which caste or birthright would you want to have if you lived in Sabor?

MO: Dove! We don’t learn much about them in The Merciful Crow, but they’re one of my favorites. They’re the second-smallest caste (the smallest being Phoenix royalty) and they are all born as witches, with the full power of the Birthright of Artistry. This gives them a supernatural gift for creative endeavors, which I would find extremely useful, as it would mean I could write all my books right the first time, and very quickly.

Find out more about the author at margaret-owen.com.