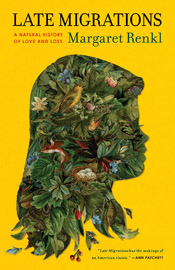 Margaret Renkl is the author of Late Migrations: A Natural History of Love and Loss (Milkweed Editions), a Summer/Fall 2019 Indies Introduce adult debut and a July 2019 Indie Next List pick.

“Margaret Renkl is a careful observer of the natural world around her. She not only notices the chokecherry root that pushed up the concrete of her parents’ driveway, the dead robin in the street, or the blazing red of a cardinal illuminated in the autumn sunset, but her description of each is beautifully written,” said Sally Wizik Wills of Beagle and Wolf Books & Bindery in Park Rapids, Minnesota, who served on the Indies Introduce panel that selected Renkl’s debut. “Renkl is also an observer of her family, and chapters about incidents in their lives are braided with essays about the natural world. The ordinary becomes filled with wonderment and loss, and we discover that the shadow side of love is part of the life we all share. Illustrations by the author’s brother, Billy Renkl, sensitively complement the text.”

Margaret Renkl is a contributing opinion writer for the New York Times, where her essays appear weekly. Her work has also appeared in Guernica, Literary Hub, Proximity, and River Teeth, among others. She serves as editor of Chapter 16, the daily literary publication of Humanities Tennessee, and is a graduate of Auburn University and the University of South Carolina. She lives in Nashville.

Sally Wizik Wills: After reading Late Migrations, I can be sure you’re never far from the outdoors. What do you see when you look out your kitchen window, and how does that nourish your life and your writing? 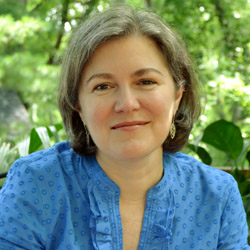 Margaret Renkl: Because we’ve added onto this house willy-nilly over the years, my kitchen window actually looks into our family room, not into the outdoors. But I have a small home office whose window overlooks a part of the yard where I’ve put up a birdbath, a mealworm feeder, and a nest box. The office is where I answer e-mails and do research, and that window makes for an excellent opportunity for procrastination when work gets tedious. On the other side of the house, in the family room itself, there’s a long table beneath a bank of windows, and that’s where I actually write. Those windows overlook another birdbath and feeding station, as well as my pollinator garden. Even during winter, something is always happening out there — squirrels looking for nuts they buried in the fall, songbirds picking through dead foliage for bugs, hawks looking for squirrels and songbirds.

Our yard is only half an acre. It’s nothing like the woods and fields I played in as a child, but it’s teeming with life anyway. It reminds me that I’m part of a cycle that’s much larger than my own life. Most people are nourished by encounters with nature, whether or not they had access to long stretches of unsupervised time in the natural world as a child, but for me those encounters are truly essential. They help me remember who I am. They remind me of what really matters.

SWW: What advice do you have for people who would like to see the natural world more deeply? Are there disciplines a person can cultivate to become more keenly observant of the world around them?

MR: I’m sure there must be, but I’m not an expert in the how-to of this kind of observation. I grew up in a time when parents expected children to show up for meals and didn’t bother too much about where they spent the rest of their time, and one of the great gifts of a free-range childhood was the opportunity to indulge my own curiosity. I learned very young that the way to study a wild creature is to be very still and very quiet and very patient.

These aren’t skills that our own age rewards. Now that everyone carries the ultimate distraction device in their pockets, boredom sets in much sooner than it used to. But the trick is still to be very still and very quiet and very patient. If you can resist the impulse to check e-mail (or your social media feeds, or the weather, or the headlines), nature will always unfold for you, no pollinator garden required.

Sit still on a bench on a busy city street and wait. Soon you’ll see the house sparrows collecting crumbs.  Follow them with your eyes as they fly away, and you’ll likely see the crevice in a nearby building where they’ve hidden their nest. Move to a closer bench and listen, and you’ll hear the baby birds crying out when their parents return with food. You’ll notice the timbre of their voices deepening day by day, and when they begin to sound like their parents, you’ll know it’s almost time for them to leave the nest. If you aren’t checking your phone when it happens, you might even be lucky enough to see their maiden flight.

SWW: Your brother Billy’s illustrations are a beautiful and sensitive accompaniment to your words. Tell us about your collaboration on the book.

MR: Billy and I are only a year and a half apart in age, and we’ve been collaborating on some kind of project or other since we were very small — we often worked together on little books for our parents and grandparents and friends. In high school, Billy was the art director for the student newspaper when I was the editor, and in college he was the art director of the student magazine I edited. Even now, all these years later, our interests often overlap: His artwork frequently features the backyard world of birds and insects and flowers. So I knew from the very beginning that I wanted this book about our family to be his book about our family, too.

I had already written all the essays in the book before Billy started working on the art, but one day I’d love to try it the other way around — it would be fun to let him make a set of collages that I later “illustrate” with words.

SWW: I live in Minnesota, and this spring the birding has been spectacular. Unusually large numbers of Baltimore orioles have been at backyard feeders and the usually hard-to-spot scarlet tanagers have flaunted themselves in yards across the state. The scientific explanation of the latter is that climate change has disrupted normal patterns of migration. On a deeper level, how do unusual occurrences in nature help us understand ourselves and the world in which we live in different ways?

MR: Climate change has become a political issue, but it didn’t begin as one; for years, politicians on both sides of the aisle accepted the reality of climate change and the role human beings play in it. (I highly recommend Nathaniel Rich’s new book, Losing Earth: A Recent History, for an explanation of how oil-company marketing executives managed to hijack the conversation.) But one beautiful thing about the natural world is that it stubbornly insists on responding to reality, not spin, and it is showing us the enormity of this calamity.

People who are paying attention, even just a cursory kind of attention, are beginning to ask questions. How is it possible to go for a long drive in the dark and come home with almost no bugs smashed against the windshield? Where are the bees that should be crowding the magnolia blossoms? Why are the secretive scarlet tanagers suddenly coming down from the treetops? Where are the treefrogs that ought to be filling the summer nights with song?

Asking questions like that is the first step toward understanding what’s happening to the Earth. And the next question is usually “How can I help?” I think most people truly want to help, and helping is how we begin to understand ourselves as creatures — not separate from the Earth but part of it.

SWW: In Late Migrations, your observations of the natural world and of your family are braided together. Is it possible for you to tease them apart? Which comes first for you, and what are the ways in which they inform one another?

But the more I wrote, the closer the two threads came together, and the more clearly I saw them as connected. In part that’s because I spent so much of my childhood outdoors, so my family memories are shot through with a deep engagement with nature. And in part it’s because the more I wrote about the natural world, the more I realized that the creatures who share my yard feel almost like family members. It’s always a mistake to anthropomorphize nature — we miss the true majesty of the natural world when we try to domesticate it — but seeing myself as part of that world, not alien at all, is one of my chief sources of comfort. For me there’s no distinction anymore. The nature essays are family essays.

Ultimately, I think, that feeling may be our greatest chance to save the planet. If we can come to understand at a deep emotional level that what is happening to the earth is also happening to us, that our fate is inextricably entwined with the fate of the natural world, then we might finally be inspired to do something about it.

Find out more about the author at margaretrenkl.com.