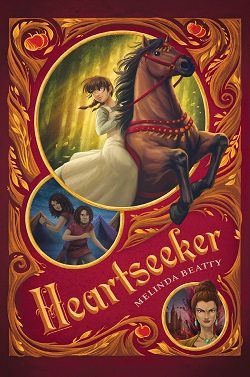 Melinda Beatty is the author of the middle-grade debut Heartseeker (G.P. Putnam’s Sons Books for Young Readers), a Summer/Fall 2018 Indies Introduce selection and a Summer 2018 Kids’ Indie Next List pick.

Beatty, who spent a few years living on a narrowboat in the English canals, now lives in Maryland with her family and works as an indie bookseller at Curious Iguana in Frederick. In Beatty’s debut fantasy, Only Fallow has a secret ability to see lies, a power that forces her from provincial life into the service of a king and court she does not trust and who have a history of mistreating the people of the Ordish migrant community.

Louise Marshall of Rakestraw Books in Danville, California, was a member of the panel that chose Beatty’s book for the Indies Introduce program. Marshall recently had the chance to ask Beatty a few questions about her inspiration for Heartseeker and what else she has in the works.

Louise Marshall: What inspired you to write Heartseeker? Was it sudden, or did the idea come to you over time? 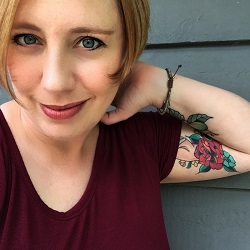 Melinda Beatty: It sounds strange, but the idea actually came from a snippet of a dream I could just barely remember when I woke up. There was a young woman yelling at a man who I knew (in that weird way you know things in dreams) was a deposed king. Instead of her fading away, I found myself thinking about her all day. Why was she so angry? What did the king do? I started off just writing a scene (which didn’t make it into the finished story), then a few scenes, and then suddenly I found myself with 10,000 words!

LM: Heartseeker is your debut novel — congratulations! What were some of the obstacles you faced as an author writing your first book?

MB: I feel like I had an incredible leg up on the whole game because of my online writing community — mostly made up of other women like me, who were trying to balance writing, work, and family. Their advice on everything from actual critique to the ins and outs of the industry and querying was invaluable. I also enjoyed a huge amount of support from my husband, who always took my writing seriously and helped me make time for it. I think my biggest obstacle was always ME, doubting and second-guessing myself, but my fabulous support system made sure that I got out of my own way.

LM: Were any of your characters based upon or influenced by anyone in particular? And how did you choose their fantastic names?

MB: Non is a bit of a nod to Terry Pratchett’s Nanny Ogg — a character I love dearly! Feisty old women who speak their minds and tell saucy jokes make the world go round. Pratchett has been a big influence on my reading and writing life in general. He taught me that rage can be channeled effectively through laughter — like hiding a brick inside a throw pillow.

The origin of Only’s name is coming up in book two! As for a lot of the other names in the book, I wanted them to reflect the different regions of Orstral. The inhabitants of Only’s hometown of Presston have more provincial sounding names, while the citizens of Bellskeep are more gentrified. The Ordish names are largely nature/water-based. I must admit that I was helped greatly by an online character name generator!

LM: If you were given the opportunity to see lies the way Only does, would you take it? Why or why not?

MB: Not in a million years! We all lie for different reasons — not all of them harmful. We bend the truth all the time to spare people’s feelings when it’s appropriate, encourage if it’s not harmful, and to comfort when it won’t bring false hope.

LM: For those of us who finished Heartseeker and immediately craved more (myself included!), I have to ask: Can we expect a second installment in the near future? If so, what can we look forward to seeing in said sequel?

MB: I’m writing the final draft of Heartseeker’s follow-up as we speak — it should be out in June 2019! Readers can expect palace hijinks, treachery, a selection of amusing lowlifes, and a daring attempt to crash a royal wedding.

Find out more about the author at mmbeatty.com.