Paul Mendez is the debut author of Rainbow Milk, a Summer/Fall 2021 Indies Introduce adult selection. The novel follows nineteen-year-old Jesse McCarthy as he grapples with his racial and sexual identities against the backdrop of his Jehovah’s Witness upbringing. 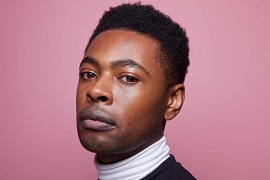 Mendez lives in London. He has been a performing member of two theater companies and worked as a voice actor for audiobooks. He is studying for a master's in Black British Writing at Goldsmiths, University of London.

Deidre Dumpson, operations manager for WORD Bookstores in Brooklyn, New York, and Jersey City, New Jersey, served on the panel that selected Mendez’s book for Indies Introduce. She called it “a coming-of-age story that grapples with race, (sex)uality, and religion in transformative ways,” and said, “Paul Mendez has crafted an enlightening story that is rich with culture and resolute in challenging the Black queer monoliths in literature. We need more stories like this!”

Here, Dumpson and Mendez discuss the life experiences and music that inspired the author’s debut book.

Deidre Dumpson: What were you hoping to achieve through the epilogue and its subtle yet substantial connections to the rest of the novel?

Paul Mendez: An earlier draft of the novel ended with what happened after Christmas Day, 2002. That didn't sit well with the original editor of Rainbow Milk, my UK publisher Sharmaine Lovegrove, who suggested I find a way to move the story forward and show Jesse surviving. They say that when in doubt, writers should look within, and I started to think about my and other Black people's experiences of racism around the time of the EU referendum result – how racists became emboldened. I wanted to show what it is like for a young, Black, British born-and-bred queer person who thinks they have it all – a job, a relationship, love, a creative pursuit – to still feel as much of an alien as his grandfather did as an immigrant sixty years before.

DD: Jesse's coming-of-age is a story of exploration despite religious and familial confinements, but it also incorporates larger ideas concerning sexuality, sexual health, power struggles within relationships, and more. Did you have a specific reader in mind or ideas that you hoped readers would walk away with? 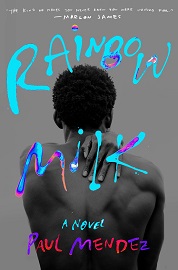 PM: If I had a reader in mind, it wasn't the many straight white women who have read and loved the novel and who organize and attend my events; I came to publishing and even writing a novel as an outsider, with no real knowledge of who read books or sold and marketed them. This might seem a pompous thing to say but I wasn't even really writing for now. The truth doesn't age, and remains to be discovered by those who want to look for it, whenever that happens. Of course, I wanted it to be read by Black, queer people, and by Black, heterosexual people whose family members have gone through similar issues Jesse has faced. I wanted to show what some young people are prepared to do in order to feel free and live their truth, and the potential consequences that accompany a lack of familial support.

DD:  Were there any challenges to writing a semi-autobiographical novel? Were you hesitant or uneasy about sharing certain pieces of yourself before Rainbow Milk's UK publication?

PM: I find the term 'semi-autobiographical' gives the wrong impression, though it's all we have; I just find it reductive and fails to convey the many processes the novel underwent. I'd kept journals for over fifteen years – mainly thoughts about leaving my Jehovah's Witness faith, moving to London and becoming a sex worker. I was building towards a straight memoir when Sharmaine came to publishing; I'd met her before and she'd always offered to read my work. So I scrambled together a three hundred-page manuscript, but for various reasons she thought I'd be better off writing a novel. The challenge was to move away from my own experiences, many of which were traumatic and painful to write out in full; switching to a third person narrative allowed me to see Jesse as different from myself. He began to take on his own characteristics and go to places with people I didn't necessarily. I could make him go through similar and different situations but without reopening my own wounds. In the end, there are very few straight autobiographical moments left in Rainbow Milk. Jesse moved to London two years earlier than I did, and under different circumstances. His white adoptive father introduces a different kind of parent-child relationship through which Black heritage can be explored; my father is alive, Black, and happily married to my mother. There is no known open queerness before mine in my family and we have not been affected by the AIDS crisis as Jesse's has. I've been fortunate that thousands of people have moved through my life on dancefloors and in the customer-facing jobs I've had, so I choose from a vast database of faces, voices and personalities to mix and match in forming characters with whom Jesse has sex, works, and worships. And then there's Norman, whose narrative opens the novel. He is based on my grandfather, who died twenty-five years before I was born and of whom I know little, but I took those scant fragments and built the rest using research and my imagination.

If I wasn't in some way anxious about what I'd written then I didn't go far enough. I had to be bold. Certainly in the UK scene, there have been very few queer, working-class, male-identifying writers of color writing novels, and there were no Black British queer templates for Rainbow Milk, so of course, I was anxious to know whether I'd written something of value or not, because the implication is that people like me aren't supposed to write novels; aren't supposed to be trustworthy guides through three hundred-plus pages of hallowed literary fiction. But I'm not at all ashamed of my subject material. To my mind, the whole point of writing for publication is that the writer doesn't hold back from conveying their valuable personal truth. If I don't write about a young, Black queer man blindly chasing the white supremacist ideal while half-killing himself just to be freed from the shackles of doctrine, and question why someone as sweet as Jesse should have to go so far in order simply to feel loved, who will?

DD: In what ways has your experience with narrating audiobooks influenced Rainbow Milk's voice and structure?

PM: As an audiobook narrator, I expected I would record my own novel, so my voice played a big role in the writing, inspired by Andrea Levy's own recording of Small Island (2004). Reading aloud has always been part of my practice in terms of ironing out sentences and getting the stresses right, and in terms of structure, keeping an eye on subtle things like Jesse's accent changing as he gets older. In the spring of 2017 I played the title role in a non-professional production of Othello at a west London pub theater, and realized I could embody a character whose physical dimensions, for example, were different from mine. I used those character-creation techniques to land on Norman; he is blind and lives in fear of trampling his two small children underfoot. When I started that part of the novel I was living with a couple in Brixton and their then-two-year-old son, whose toys and clothes were strewn around the house. I'd lived in that house, on and off, for almost five years by then, but once I'd put a blindfold on I could've been anywhere. I quickly came to understand how disorienting sight loss can be, and while Norman's was more gradual, it must still have caused him daily anguish, trying to keep the children safe while his wife worked two jobs. I took off the blindfold, sat down in my room and recorded a monologue in a voice I improvised, and that became the first draft of Norman's first-person story. I don't know how to write a novel in a traditional way. I haven't been through any of the MFAs or other creative writing programs. I have my own slightly esoteric, amateurish skills and used them to create and shape material. The rest comes down to my own personal writing style, in which I've always had faith.

DD: Nineties and early 2000s R&B is woven throughout Jesse's story. Can you explain what it was like picking and incorporating songs and lyrics into your book?

PM: I was inspired by the British novelist Diana Evans' Ordinary People, which is based around John Legend's eponymous 2004 concept album about the various stages of a long-term relationship. It was full of references to other songs of the time, and because I was in my early twenties and a regular at gay clubs who had grown up with the radio being on every day, I came to realize how effective even song titles can be at anchoring a time and place, and how pleasing it can be to see names like Destiny's Child,  Mariah Carey, Mary J. Blige, Missy Elliott and Kanye West in print in a novel. Novels are supposed to be high-culture and written by white men who went to Oxbridge or Ivy League universities and muse about Wagner and Beethoven catalogues, not hungry little queers twerking to "Crazy In Love". The reader isn't going to share the exact same memory as you, but if you mention "21 Seconds" by So Solid Crew, for example, everyone who grew up in the UK inner cities in the early 2000s will know exactly the vibe you're trying to convey. JAY-Z's The Blueprint will always be tied to 9/11 as it was released that day. "Freak Like Me" by Sugababes wiped the British pop slate clean in 2002 by fusing Adina Howard's smutty lyrics with the instrumental of Gary Numan's 1979 industrial synthpop number "Are 'Friends' Electric?", creating a moment of innocent futurist optimism to inspire Jesse's escape to a new life in London. Joy Division's Unknown Pleasures creates a space in which Jesse and Owen can experience the same warm nostalgia despite it evoking very different memories for them both, as they're ten years apart in age, from different regions and classes and educational backgrounds. I love to listen to music while editing and elaborating draft material as it helps me enter into a space in which I'm able to perform what I'm doing patiently, and intricately, while relaxed. I curated very specific playlists that matched the color and texture of the passage I was working on, and sometimes, like the voices of Brandy and Monica, the lyrics perfectly matched.