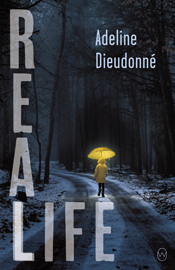 “Real Life is a raw, dark, and profoundly powerful coming-of-age tale,” said Susan Schlesinger of Books on the Square in Providence, Rhode Island, who served on the bookseller panel that selected Real Life for the Indies Introduce program. “Adeline Dieudonné brings to life a heroine for the modern world. After you read the first sentence, you won’t be able to leave the girl’s side, not until it ends — all of it.”

Dieudonné is a Belgian author who lives in Brussels. Real Life, her debut novel, was published in France in 2018 and has since been awarded many major French literary prizes: the prestigious Prix du Roman FNAC, the Grand Prix des Lectrices ELLE, the Prix Rossel, the Prix Renaudot des Lycéens, the Prix Goncourt-Le Choix de la Belgique, the Prix des Étoiles du Parisien, the Prix Première Plume, and the Prix Filigrane, a French prize for a work of high literary quality with wide appeal. Dieudonné also performs as a stand-up comedian.

Here, Schlesinger talks with Dieudonné about her debut.

Susan Schlesinger: Real Life addresses universal themes of death, coming of age, and the oft-times damaging dynamics of family relationships, all told through the eyes of a young girl. Were you aware that her story would speak to so many? 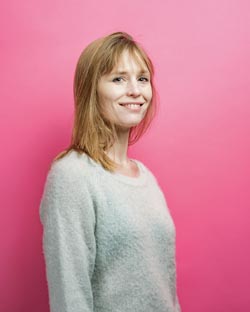 : No, absolutely not. The story was speaking to myself; I had this little voice in my head and I wanted to listen to it, to try to turn into words what it was whispering as accurately as I could. I couldn’t imagine this story and my little heroine would mean so much to so many people. And that’s overwhelming for me to know that they exist in so many hearts.

SS: The young heroine in Real Life is never named. Why did you choose to have her remain nameless while telling her story?

AD: I don’t really know why I didn’t give her a name. Maybe because I didn’t really need it and I don’t like to name my characters. If it’s not essential, I don’t do it. Another clue could be the fact that Real Life is a mix between fairy tale and reality. It was a tricky balance I had to maintain between both. And I had the intuition that naming the little girl could break that delicate balance.

SS: The two young children see death every day in the form of the father’s trophy room, which is filled with stuffed carcasses from his big game hunting expeditions — but then they witness a violent accident. How does that affect their relationship with death?

AD: When they see someone dying right before their eyes, they realize how fragile they are, their own vulnerability, how death and suffering are never far away. We all experience that one day or another. The dark side of life. How do you live with it? Especially when you are a child and your parents are not supportive at all? How do you find a way to create some light in that darkness? And the stuffed carcasses of the trophy room take on another color. The little girl realizes they were real living animals before. Of course, she knew it somehow, but now she really sees them as dead bodies.

SS: Could you tell us more about the evolution of the relationship between the heroine and her mother?

AD: I loved writing about it because it’s complex. In the beginning of the story, the little girl has a harsh opinion about her mother because she’s angry; her mother doesn’t protect her, doesn’t seem to care about her children. She’s obsessed with her little goats. In fact, she’s being destroyed by her husband. She’s lost all her self-esteem, her voice; she doesn’t see herself as a person anymore, so she doesn’t see herself as a mother. But something is going to change when she realizes that her husband begins to be violent with her daughter. Some kind of sisterhood will appear between the mother and the girl, against the misogynist father. The growing little girl will see her mother differently, appreciate her intelligence and the terrible waste of her life. I would be very interested to see how their relationship evolves after the end of the story, for the rest of their lives.

SS: What inspired you to tell this story?

AD: I just had the image of these two children witnessing the accident that happens in the beginning. And I wanted to know what would happen to them. How could they keep on living after that? It was just after the terrorist attacks in France and Belgium. I was wondering how violence affects our lives and also asking myself: How does a child become a murderer? I’m sure there are a lot of answers to these questions, but I wanted to explore one of them. I read We Need to Talk About Kevin by Lionel Shriver at the same time and loved it, and I read again The Little Girl Who Loved Tom Gordon by Stephen King, and it also inspired me.