Simon Jimenez is the author of The Vanished Birds, a Winter Spring 2020 Indies Introduce debut novel and a January 2020 Indie Next List pick. 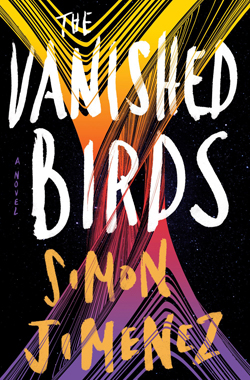 “The Vanished Birds is set over the course of millennia — a snapshot of humanity on the brink of Earth’s climate meltdown and that same humanity flung far into the future and across star systems,” said Barak Lake of Pegasus Books in Berkeley, California, who served on the panel of booksellers that selected Jimenez’s book for Indies Introduce.

“This is at once a space opera and meditation on mourning,” continued Lake. “It is a queer coming-of-age story and an exploration of the nature of trauma. It shows the courage of loving another blindly, and the desperate pain of that love. This is science fiction at its best — a sideways glance at the realities of the world we live in, refracting the nuance and complications of life through its lens. The Vanished Birds speaks to where we are now by showing us where we can go — and asking us how much will really change when we arrive.”

Jimenez received his MFA from Emerson College and currently lives in Philadelphia. His work has been featured in Canyon Voices and 100 Word Story’s anthology of flash fiction, Nothing Short Of.

Here, Lake and Jimenez discuss the music and writing that inspired the author while he created the worlds and characters of his debut novel. 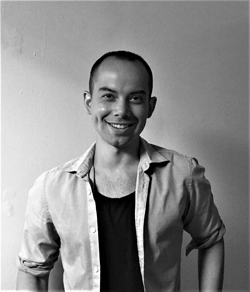 Simon Jimenez: I grew up playing piano. It was a love/hate relationship, with a lot of angst around the discipline of it, the practice and the lessons and the recitals, the hellishly incremental rise in skill level. I often thought of quitting. But even as I suffered it, I still loved the act of playing because it was a great emotional outlet, and also because of that certain tactility — the strikes and the vibrations, and the drawn out, echoey quality of the sustain pedal. I liked the immediacy of the feedback, and how quickly you could create something beautiful, if you knew how. The pleasures of piano are not so delayed as the pleasures of writing.

I think it’s because of my history with piano, and the songs that I gravitated towards in practice — clumsy covers of favorite video game soundtracks — that my musical tastes now gravitate towards the melodic. That was definitely an influence on the novel, the melodies. While writing I listened to a lot of sweeping orchestral stuff, like the Gattaca soundtrack (“The Departure” was on loop fairly consistently) or pieces by Max Richter, alongside sparer songs usually played by one or two instruments, a lone piano or guitar, like anything from the Million Dollar Baby soundtrack. Nothing with words, for the obvious reasons.

Right now, for pleasure, I’ve been listening to an album called Mouth Moods by Neil Cicierega. It’s great. Neil pulls from and samples famous “nostalgia songs,” usually from the ’90s, like “All Star” or anything by the Barenaked Ladies, and he mashes them either together or into other older songs or even into film scores (my favorite is his mash-up of “Y.M.C.A.” and the Inception soundtrack). It’s a comedic exercise, but also a surprisingly moving one. He is recontextualizing old memories. Songs played ad infinitum and calcified in the mind, now, in the new contexts he gives them, excavated, and given a new and different life. I am moved by the repurposing. Fun, silly, and smart bullshit. Highly recommended.

BL: Ahro’s relationship to his trauma is a defining arc in The Vanished Birds. Though we do hear the story of his past, its actors — the musicians, the painted ship, etc. — are never fully explored in the book. Can you speak to your decision to leave them as part of Ahro’s history and feature them in the wider scope the novel?

SJ: Great question. To first talk about world-building, while I greatly enjoy reading fleshed-out fictional mythologies and cosmologies and economic systems and government bodies, my own tendency when writing is to err on the side of evocation rather than explication. So I handled Ahro’s past the way I handled any other world or culture in the book, giving it enough telling detail to draw out a feeling or an impression, but not enough to make a diagram.

I’ve been thinking lately about why this is my tendency. I had a privileged childhood, one that afforded me many opportunities to travel, whether that was visiting family in the Philippines and Canada, or elsewhere in the world my dad thought would be good for us to see. Of everything in my life, I’m most thankful for these experiences. From an early age I was exposed to many different cultures, different foods. Different horizons. But though these were all products of a much larger world, a world that I couldn’t hope to understand in its totality, these products were funneled through the very narrow pinhole of my own experience. Their shared context was me, and the medium through which they are expressed, my memories. My memories of these places — or of anything, really — are not aerial views with accurate topography, but intense, close-up totemic images that are fractured and do not necessarily fit together. All of it funneled through whatever I was going through at the time.

So it is with Ahro’s memories of his old home. The crew of the ship is afforded knowledge of the place only through his scant ability to articulate it. His portrayal of his past, even his memories of it, might not be accurate, because he was too close up. His memories are a gallery of emotional iconography without the helpful placards to contextualize them. He never had the full scope of the place. His only context was himself, and the pain he felt as he moved through those spaces. But his feelings, and the consequences of those feelings, are true, and that’s all that is relevant to that moment in the story, which by design keeps its flashbacks to a minimum.

BL: The phrase “vanished birds” comes from Fumiko, a character who, throughout most of the book, is tertiary to the other main characters. What was it like weaving her and Nia’s stories together? Did one of them come to you first?

SJ: Weaving their stories together was as interesting and sexy as managerial accounting. Which is to say that, like most of the writing I do, it was done with a lot of iteration and revision. Nia’s story came first, I think. My process for the first draft was this: I wrote chapter one (Kaeda’s). Saw what I had. Thought about where the story might go. And then I started chapter two. The hand-offs between characters emerged at the tail end of each chapter pretty naturally, which thank god. I exploited that. But at a certain point, when it became obvious that I had arrived at the mid-point of the story, The Panic hit me. So I drafted up a quick outline for the last half, wrote it out as fast as I could, and then, for a long time, I re-read and re-wrote, smudging the charcoal, until I finally had something I wasn’t totally embarrassed by.

While writing it did cross my mind the thought that maybe I should make Fumiko more central, have her be a direct and consistent presence on the ship, or at certain waypoints on their journey. But for whatever reason that just didn’t work out. Or the drafts where that happened just didn’t taste right. I don’t know. I’m alright with how things spun out in the end — it made sense for her character to keep to herself till it’s a bit too late.

BL: The Vanished Birds takes us through several fascinating worlds and cultures. Do any of them stand out to you as a favorite?

SJ: Probably the first world, Umbai-V. It was the easiest for me to write about. I’m still trying to figure out why. I think it’s because with this world I was lucky enough to stumble on the telling detail of the place early on in its creation (the dhuba fields) and I was able to use that detail as a landmark when it came to inventing the other particulars of the world. I also enjoyed writing about the farming, because there is something rhythmic and of interest when describing work and process.

BL: Can you tell us a little bit about what you like to read? Were you thinking of any particular authors while writing The Vanished Birds?

SJ: I like to read everything, which is the coward’s answer, but true, so whatever. As for authors I was thinking about while writing, anyone who mixes genre in their work, really, crossing them like two live wires. I’m always thinking about David Mitchell because how can you not. His language is relentlessly inventive. His plots are tight, suspenseful, but with space to breathe, and reflect, and meditate. Jennifer Egan. A Visit From the Goon Squad was influential, especially in terms of temporal scope. The sweep of Gabriel García Márquez’s prose; I don’t think there’s a way to evoke his name without sounding like a pretentious ass, but I must, because he taught me that there are many ways to play with time through style. These are all writers who have, at some point in their career, contained an entire life within a single sentence.

Find out more about the author at simonjimenezauthor.com.