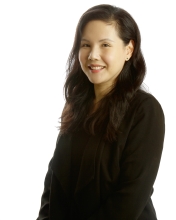 Stephanie Tromly is the author of Trouble Is a Friend of Mine (Kathy Dawson Books), a Summer/Fall 2015 Indies Introduce title for middle grade readers and a top Summer 2015 Kids’ Indie Next List pick.

Described as Sherlock meets Veronica Mars meets Ferris Bueller’s Day Off, Trouble Is a Friend of Mine is the story of a wisecracking girl, Zoe, who meets Philip Digby, a weird but brilliant boy, and their roller-coaster of a semester that’s one part awkward, three parts thrilling, and five parts awesome.

“Tromley has written a mystery/adventure with quirky characters who do not seem to like each other. This is what a YA book should be — smart, funny, and surprising. A terrific read!” said Margaret Neville of The King’s English in Salt Lake City, Utah.

Tromly, who was born in Manila, grew up in Hong Kong, and graduated from the University of Pennsylvania, has worked as a screenwriter in Los Angeles. Currently on leave from a Ph.D. program in English Literature at the University of Toronto, she lives in Winnipeg with her husband and toddler son.

BTW: Not only are you a published author, but you are also a screenwriter. Your debut, Trouble Is a Friend of Mine, has been compared to TV’s Veronica Mars and 1980s films from John Hughes. How has screenwriting and film in general influenced your writing?

Stephanie Tromly: I’d say that having worked in visual media makes my writing style more kinetic. People often remark on the influence of action movies and slapstick in my writing. I also think the pacing and timing in Trouble is very much influenced by film. I try to write dialogue in a short quippy style; I think that’s a holdover from my film and TV writing.

I’d highlight two pieces of advice more experienced writers gave me that have been useful in my new gig as a YA writer: First, keep the dialogue real in terms of both content and circumstance. No one really stands around waiting for their conversation partner to finish a long monologue, for example. And, second, they told me to cut down on stage direction and dramatize rather than explicate. Henry James said that same thing about writing novels.

BTW: What was it like to learn that your debut title was being published?

ST: Of course, it was a huge shock. The Internet is overflowing with bad news about the “no hope” business of selling a book. For days after the sale, I didn’t believe it had happened. When it sunk in that it had, I didn’t trust myself to feel good about it. Even now that it’s come out, the thought “It could all disappear” still runs through my head occasionally.

BTW: Zoe’s first impression of Digby isn’t one that would typically lead to friendship. She describes him as rude and someone who doesn’t take no for an answer, among other things. What is it about Digby, who on the surface isn’t immediately likeable, that Zoe, and readers, find so enticing?

ST: Zoe is obsessed with making friends in her new school and she finds Digby’s casual attitude to not being liked fascinating. I think she admires his bravery even though initially she doesn’t want to be a lone wolf like he is. Part of what I’m exploring is precisely this idea of “likeability,” and as the story goes on I show Zoe start to think about the implications of wanting to be liked by people who require her to be “likeable.” I’m glad you asked about Digby’s likeability, by the way. I often find this term applied to women but not so much to men.

BTW: Trouble Is a Friend of Mine is a young adult title, but the genre’s reach exceeds its young audience and many YA readers are, in fact, adults. Why is the genre so appealing to adults?

ST: YA sometimes get short shrift, and I’ve read many articles that wonder why adults would read prose targeted for younger people. Most of the time, those critiques boil down to the idea that the tone of YA writing lacks the gravitas befitting an adult reader. To that, I’d point out the long tradition of “important” writing that presents itself as play. Don Quixote, Chaucer, The Decameron... fairy tales and fart jokes, folks.

The issue of tone aside, YA stories give us a chance to return to a time in the past when we (as kids) didn’t have much power or agency, only this time the narrative privileges our point of view and takes the time to analyze and decode feelings that were inarticulable at the time. When I was a kid, I was fully immersed in the rush of life and the pressure of living up to milestones like application deadlines and exam dates. Any feelings that got in the way of meeting those milestones were filed under “adolescent turmoil” and dismissed as “oh, hormones” or immaturity. Writing this book gave me a chance to reprocess, for example, the feelings of isolation I experienced as both the new student (I moved to a different country and as a 12-year-old had to socialize with kids who’d been friends since nursery school) and the extremely young kid (my parents had started me in school two years early). But, of course, YA is so much more than catharsis.

BTW: If you were a bookseller for a day and Zoe and Digby came into your store, what books would you put in their hands, how would you pitch them and why?

ST: I’d give Digby Raymond Chandler’s books because I think part of what makes Digby so sad is the dread he feels whenever he’s confronted with the fact that the world is a corrupt place. Chandler’s Detective Marlowe deals with this horrific idea with so much style and humor. I’d hand Digby the books, give him a hug, and tell him that it’s lonely but noble to be the one guy who believes in doing the right thing even when it isn’t the socially acceptable thing to do.

I’d give Zoe the first Eloise book (by Kay Thompson) and tell her that she isn’t alone or somehow unlovable just because she isn’t in a squad. I’d point to the endpapers where it says about Eloise that “she has inner resources” and give Zoe a hug, too. Being young is hard.

BTW: What role do you feel independent bookstores and booksellers play in getting debut authors’ novels into the hands of readers?

ST: I’ve had tons of great experiences in large bookstores and I think their staff often do know their books. Where I think the people who work in smaller bookstores have an advantage, though, is in the way many of them not only know the books, but also get to know their customers. I’d make the analogy that while chain bookstores can be arbiters of taste, indie stores are concierges. Of course, part of this is the customers’ attitudes when they come in the shop. I know I don’t feel as bad when I buttonhole the proprietors and staff of indie stores and force them to talk me through their stock. That’s often how I get to hear about beginning writers like me.

Learn more about the author by following her on Twitter @stephanietromly.

ABA member stores are invited to use this interview of any others in our Q&As With Indies Introduce debut authors in newsletters and social media and in online and in in-store promotions. Please let us know if you do.