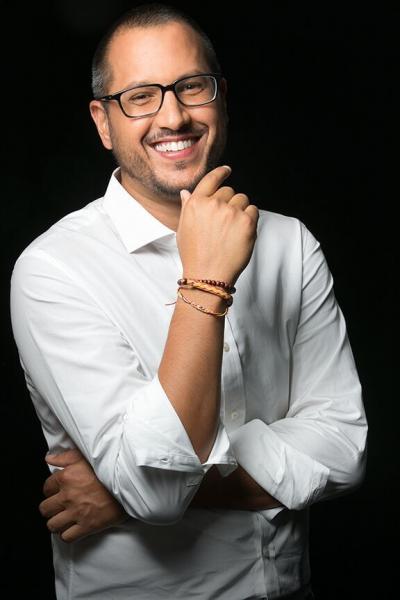 Sunil Yapa is the author of Your Heart Is a Muscle the Size of a Fist (Lee Boudreaux Book), a Winter/Spring 2016 Indies Introduce debut novel.

The son of a Sri Lankan father and Montanan mother, Yapa has lived around the world, including in Greece, Guatemala, Chile, Argentina, China, India, England, Canada, and the United States. He holds a bachelor’s degree in economic geography from Penn State University and a master of fine arts in fiction from Hunter College, where he worked with authors Peter Carey, Colum McCann, Zadie Smith, and Ben Marcus, among others. His writing has appeared in American Short Fiction, The Margins, Hyphen Magazine, The Tottenville Review, and Pindeldyboz: Stories that Defy Classification.

“In short chapters that chronicle one day of World Trade Organization protests in Seattle, Yapa immerses [readers] in chaos and moments of transcendence,” said Anmiryam Budner of Main Point Books in Bryn Mawr, Pennsylvania. “Empathy and insight suffuse each character’s story — protesters, police, and delegates all have their moments. I closed the book with the feeling that if we can truly open our hearts to understanding and forgiveness, there is hope for all of us.” 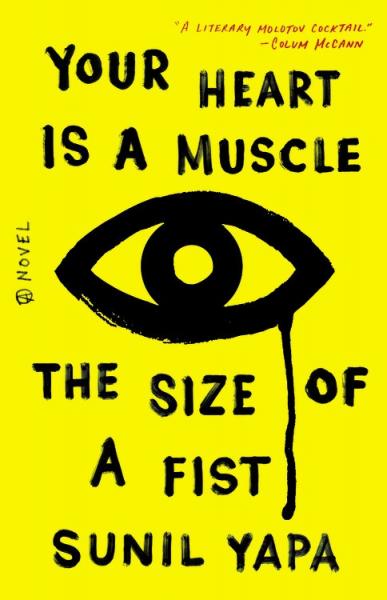 Your Heart Is a Muscle the Size of a Fist allows readers to witness the events of the 1999 World Trade Organization protests from within its pivotal moments and from varying points of view. What inspired you to write this story?

Sunil Yapa: I’ve always been fascinated by American history and the stories of tremendous American courage to make change. The 1999 WTO protests revealed, so powerfully, how small the world is. You can’t separate our lives here from those of people on the other side of the globe. Yet the media routinely ignored the stories of the Seattle protests or, worse yet, reduced them to a broken window and the phrase “violent protesters clash with police.” I wanted to understand the very human stories on both sides. This was a clear example of ordinary people in extraordinary circumstances and how far people will go for fear and love.

Each character is developed fully and with notable empathy; what was the research process like and how were you able to tap into each character without bias?

SY: The great gift of writing a recent historical novel is the amazing quality of the resources available to you. I spent weeks, months, years studying everything I could get my hands on, from raw video footage I found in the basement archive of the University of Washington to Xeroxed zines made by activists themselves to unedited audio recordings of the police scanner traffic from the protests. I had an incredibly intimate look into the hearts and minds of both sides, and along the way discovered many moving stories of courage, fear, and even compassion — on both sides: protesters and police alike. It really made me realize the truth of what John Berger wrote: “Never again will a single story be told as if it’s the only one.”

Victor, the novel’s central character, is a biracial, rebellious 19-year-old who travels to the far-off reaches of the globe to make sense of issues of justice. How did your own experiences influence Victor’s character?

SY: On the surface Victor is the most similar to me at 19: a wanderer with coffee-with-milk colored skin, a weed-smoking dude with long hair and a red bandanna — a lonely kid with a lot of anger whose source or remedy was unclear. By 30, I’d seen some of the world from outside the gated mansion of my own privilege, including by hitching rides and catching chicken buses from Nicaragua to Mexico. I lived in Chile and backpacked through the Andes and Patagonia. I turned 29 in Nepal, riding on the tops of buses. (Watch out for those electric cables!) I suppose some of that inevitably ended up in my writing of Victor, particularly his experiences in Central and South America. But really, my emotional experience ended up in all the characters. I set out to write a book with no character that mirrored my experience and in the end found myself with seven of them! To misquote Flaubert, “Tout le monde, c’est moi.”

In a recent interview, you cited the Ché Guevara quote, “The true revolutionary is guided by great feelings of love.” How does love play a role in Your Heart Is a Muscle the Size of a Fist?

SY: Any act of solidarity, any act of deep empathy, is revolutionary and potentially world-changing. After 2014’s shooting of Michael Brown and the subsequent conflict in Ferguson, many called (again) for a national conversation on race. It’s great to talk, but we need something deeper. We need empathy. We need to really sit and try to understand each other’s experiences. That requires love and is itself a form of love. Although the first impulse for protest is often outrage, anger is quickly exhausted. You don’t spend years of your life dedicated to service or change without a great sense of hope. You don’t risk getting tear-gassed, pepper-sprayed, beaten, hosed, and arrested without a great feeling of love.

When giving writing advice, many authors and teachers tell emerging writers to draw from their own experiences for inspiration. Colum McCann, one of your teachers at Hunter College, advised you to “write towards what you want to know.” What does that mean to you?

SY: I am excited by novels that bring me news of the world. I love most that literature which eases me out of my own limited life. “Writing toward what you want to know” means using your writing as a tool for understanding something other than your own experience. It means doing a ridiculous amount of research and then learning how to forget it all and just write. It means being a person more interested in listening than in talking. It means having the courage to wear your heart on your sleeve. It means flying on a wing and a prayer. It means hoping the wind holds. And it means being ruthless with your own work — when it doesn’t ring true you throw it out and try again.

Thank you for attending Winter Institute 11 in Denver in January. What do you hope booksellers and readers take away from your debut?

SY: It was a huge honor (and a total pleasure) to be invited. The response to this novel, a debut no less, has been simply tremendous. If anything, I think as a community of readers and writers, we should all take courage and hope from that. Writing and reading isn’t “escapism,” and it certainly is not as marginal to our daily lives as some want to claim. Writing and reading are central to our lives, central to the culture, and incredibly relevant. Empathy is a radical act. And that’s exactly what we’re doing when we settle into our favorite chair and imagine ourselves into other, far different lives. It’s called reading and it’s still the best technology out there for understanding and conveying human experience. It’s beautiful, really, and I’m happy to be a part of the community that considers it as vital as breathing.