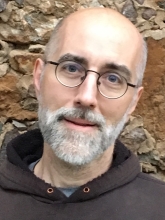 As many of you may have read, during this past election cycle, Inquiring Minds Bookstore broke one of the cardinal rules of doing business in a small town. We took a political stand. It wasn’t the first time we decided to make a statement about something we felt strongly about, but it was the most controversial.

In the months and weeks approaching the election, I was increasingly alarmed by the rising popularity of Donald Trump and what I saw as the politics of hate that buoyed his campaign. I called a friend and asked him to design a banner we could put in the window. The banner consisted of the Nazi flag with the words “Make America Hate Again,” a play on words based on the Trump slogan, “Make America Great Again.” I surrounded the banner with books about Trump, Hitler, Nazi Germany, and several must-read current books (The Bigot: Why Prejudice Persists; White Trash: The 400-Year Untold History of Class in America; Strangers in Their Own Land: Anger and Mourning on the American Right; and White Rage: The Unspoken Truth of Our Racial Divide). I also posted a sign that both explained the purpose of the display and repurposed the famous quotation from Martin Niemöller about the dangers of not forcefully speaking out against hate.

The banner was up for three weeks before all hell broke lose. On October 18, the village building inspector served notice of two violations ordering us to remove the display. That afternoon we got in touch with Chris Finan, director of American Booksellers for Free Expression (ABFE) at the American Booksellers Association. He immediately returned our call and assured us that the ABFE would back us up. The support from ABA and ABFE included putting me in contact with noted First Amendment attorney Michael Bamberger, the general counsel of the Media Coalition. Michael worked with us over the weekend immediately following the issuing of the notices from the building inspector to craft a response. His intervention with the village attorney was successful in getting the village to back down on trying to enforce the violations. Without that assurance of moral and legal support, I’m not sure that we would have been able to maintain the courage of our convictions.

On October 19, we received several phone calls from people in the community warning us that the bookstore was going to be picketed that afternoon. In addition, our Facebook site had been bombarded with negative ratings and hateful comments. Our rating went from 4.8 to 2.5 overnight. The phone was ringing off the hook, mostly hang-ups mixed with a few nasty comments. I decided that I would gather the staff and see if they wanted me to take the banner down. They were unanimous. We would hold our ground!

I met with the local police to make sure that we were all on the same page. The protest came and went. It was mostly civil. We engaged with the protestors and told them that we supported their right to be there. They in turn agreed that we had provoked a necessary dialogue in our community.

Once the storm of controversy had cleared, we were met with a heartwarming amount of positive support. Newspapers from as far away as Ireland and Israel covered the story.  The press coverage generated book orders and offers of financial support from all over the country. More important was the response from our own community. I’ve noticed more young people hanging out and reading. Suddenly, my clientele seems a bit more diverse.

Another positive side effect has been the maturation of our staff. They have been empowered! They have witnessed the power of confrontation and are now awaiting the next challenge. The daily affirmations of customers, e-mails, and letters have served to bolster the feeling that they are doing something meaningful.

The election may be over and the banner has been taken down, but every day since the election people who have never set foot in our store are going out of their way to come in, shake our hands, and thank us for taking a stand. Oh, and, yes, they are buying books. Our October/November of this year is our best ever. Sometimes rules are meant to be broken.