Akira McKinzie has joined the American Booksellers Association as the organization’s new Social Media Coordinator. McKinzie will work on a part-time basis to manage the ABA and IndieBound social media accounts and will use them to connect with ABA membership, the book industry, and consumers and spread the word about ABA, indie bookstores, and IndieBound. 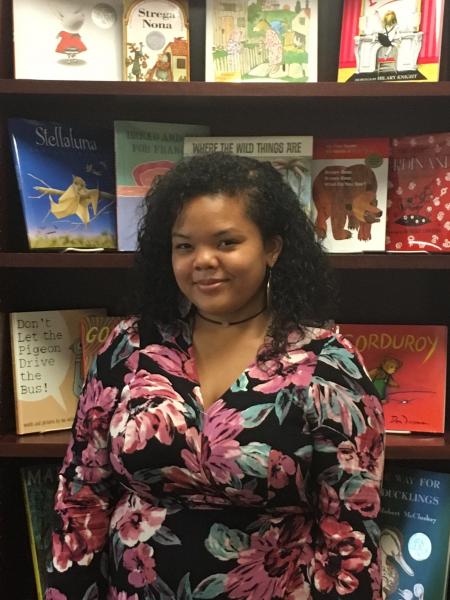 McKinzie is stepping in for ABA’s previous social media coordinator, Catherine Cusick, who left the organization in April, and will report to Membership and Marketing Officer Meg Smith. In her new position, McKinzie will create dedicated social media campaigns for both ABA’s and IndieBound’s individual Facebook and Twitter pages to promote ABA programs like the Indie Next List, IndieBound bestseller lists, and advocacy initiatives, as well as the activities of the American Booksellers for Free Expression (ABFE) and the ABC Children’s Group. She will also work with ABA staff to develop and implement social media plans for individual departments.

“I’ll be creating digital social media campaigns for two different brands: the ABA brand and the IndieBound brand,” said McKinzie. “It’s two different types of marketing campaigns: one is member-facing and one is consumer-facing, so it’s keeping two different ideas in mind but also blending everything into one cohesive message, which is about how great independent bookstores are and how people should shop local.”

McKinzie graduated in 2015 from Fordham University, where she earned a major in communication and media arts and a minor in African and African American studies. She took a number of digital marketing classes in college while also working on integrated marketing in the television industry as an intern at MTV and as a department assistant at Viacom Velocity.

“In those two roles, I was able to experience social media from the other side,” said McKinzie. “It was really interesting, so I wanted to pursue it as a career.”

When she is not at ABA, McKinzie works as a high school teacher in the Bronx, where she teaches English as a New Language (ENL) to 11th and 12th grade students; McKinzie is part of the New York City Teaching Fellows and has one more year of the program to complete, she said.

“I’ve always been a huge reader,” said McKinzie, naming her hometown’s independent bookstore, Ye Olde Warwick Book Shoppe, and the Strand Book Store in New York City as two of her favorite indies. “I’m a big bookworm. Anything that has to do with books I’m interested in, and independent bookstores are known to be places you can go and feel comfortable; Roxane Gay used the word ‘sanctuary.’ So that’s something that drew me to working here and trying to promote independent bookstores.”

“So far, I’ve been getting to know some of our followers on Facebook and experimenting with posts to see what grabs the attention of our followers on IndieBound and ABA,” said McKinzie. “Right now, our posts are going pretty well. We’re getting a lot of traction on Twitter and on Facebook, more so than we’ve had in a long time, which is great.”

In the months ahead, McKinzie said she is looking forward to making the most of ABA’s social media platforms and sharing all of the great things the organization is doing.

“I want to see the books on the Indie Next Lists and the news in Bookselling This Week go farther and reach more people,” she said.

McKinzie also hopes to introduce ABA to people who are unfamiliar with it, so they can find out what the organization does. And, since people these days are interested in learning about independent bookstores, she said, there is a great opportunity for ABA to use social media to increase its reach to consumers.

“Interest in indie bookstores is up; people are talking about them more, which is leading people to our pages,” said McKinzie. “When you Google independent bookstores, the first thing that pops up is IndieBound.”

Booksellers should feel free to use the @ABAbook and @IndieBound Twitter handles to share pictures and news about events, anniversaries, and store openings with ABA so she can retweet and repost them, McKinzie said.

“I find that posts with really great pictures, like display tables or even just aesthetically pleasing pictures of bookshelves, go really far on social media,” she added.

McKinzie can be reached via e-mail at akira@bookweb.org or via direct messaging on the ABA and IndieBound Twitter and Facebook pages.