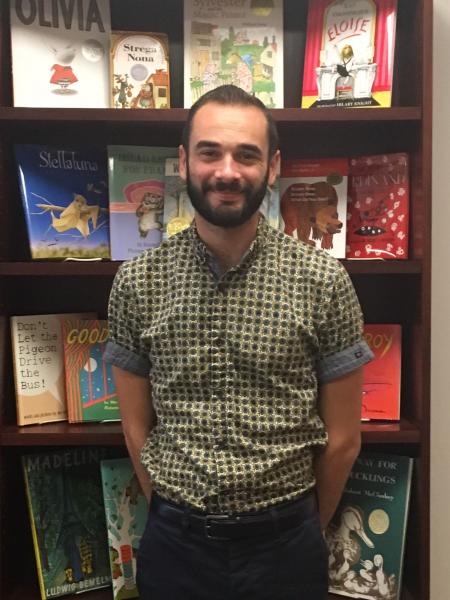 Working under ABA Membership and Marketing Officer Meg Smith, O’Brien will be the first point of contact for member bookstores in his regions, and will be available to answer questions regarding ABA services and provide assistance with industry-related issues. He succeeds Nathan Halter, who left the organization in July, and will work with ABA’s other new Member Relationship Manager, Liz Roberts, who joined the organization in June.

In his new position, O’Brien’s other areas of concern will include supporting international members, helping members with the association’s Kobo program, and maintaining ABA’s member database.

O’Brien said he has spent a lot of time with books and book-lovers, and looks forward to continuing that during his tenure at ABA. In fact, the first job he ever held was at a bookstore that his aunt managed, the place where he also first discovered his passion for poetry. He is also excited “to provide booksellers with all with the resources they need to strengthen their stores and help keep the community of independent bookstores vital and growing,” he said. “It’s ​my hope to assist booksellers in taking full advantage of the benefits and programs we offer in order to keep their stores not only running, but thriving.”

O’Brien recently finished his MFA in creative writing at The Ohio State University in Columbus; while there, he also taught undergraduate English and served as the poetry editor of the school’s literary magazine, The Journal, and the managing editor of The Ohio State University Press Book Prize Series. O’Brien said he has always wanted to work in the literary or nonprofit worlds in some capacity, in a work environment surrounded by likeminded people.

“When I came upon ABA and learned about the programs they provide and all the ways they support booksellers and bookstores, other indie bookstores that I frequented in Columbus and in my hometown started coming to mind,” said O’Brien.

Some of those bookstores, he said, include The Book Loft in Columbus, which was where all of his professors would launch their books and which, he said, served as a big part of the larger creative writing community in the city.

“I also liked the idea that I would be working directly with those stores because I feel like I know these folks already, just in a different capacity, as a community member. I’ve also always wanted to do something in my professional life like this, that extended out into the community,” he said.

In addition to his work with the American Booksellers Association, O’Brien also does freelance editorial work, writes book reviews for publications like the Boston Review, and provides editorial consultation for writers, all while pursuing writing on his own. In between his undergraduate studies and getting his master’s degree, he also worked as an administrator at the Hudson Valley Writers Center, a small literary nonprofit in Sleepy Hollow, New York.

O’Brien will be reaching out to booksellers in the coming weeks and months and said he hopes to meet many in person at upcoming ABA or regional events. He can be contacted at (914) 637-0037, ext. 7514, or at daniel@bookweb.org.