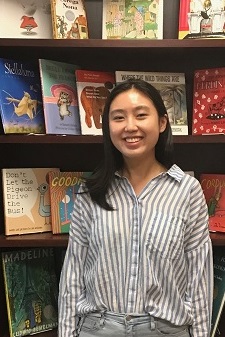 Choi conducts background research and develops presentation materials for education sessions, and helps coordinate all data and presenter materials, as well as information about presenters and panelists such as headshots and biographies. She also coordinates communication, including conference calls and video calls, with presenters and panelists, and makes sure all relevant materials, including PowerPoints, handouts, and notes, are turned in.

Choi went to Boston College, where she majored in chemistry, and afterward worked at the circulation desk at the Tappan Library in Tappan, New York. After college, said Choi, she had been considering going to graduate school for chemistry, but when she found out about the job at ABA, she decided to apply.

Choi said her favorite part of the job is interacting with her fellow staff and with booksellers. She got the chance to do a lot of that at this year’s BookExpo and Children’s Institute, for which she helped develop programming.

“I like the people at ABA,” said Choi, “and I like interacting with the booksellers at different events. It’s nice to be able to see how you are helping people, that all that hard work paid off.”

Choi said she has learned a lot so far in speaking with booksellers and finding out what they need and is always looking for new ways to gauge what booksellers want to learn: “What I’ve heard from booksellers is that they want to know more about how to engage with different age groups. How do you get teens to read books and continue reading? Education related to diversity is always going to be something we should be pushing. And I think another issue that booksellers are interested in is making their stores more inclusive of readers of all genres, like romance and sci-fi.”

As for her favorite books, Choi told BTW she has been a die-hard fan of the Harry Potter series since she was seven years old. More recently, she enjoyed reading The Picture of Dorian Gray by Oscar Wilde, The Wind-Up Bird Chronicle by Haruki Murakami, and Circe by Madeline Miller.
As ABA’s new membership and database assistant, Anastasio reports to Senior Membership Manager Daniel O’Brien, and provides administrative and database-related support to ABA’s membership department. 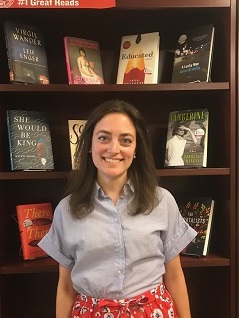 She also works with Member Relationship Manager Liz Roberts and Membership Assistant Kate Brennan and has been developing relationships with booksellers in preparation to become the junior member relations representative for two of the nine regions.

Anastasio attended the University of Connecticut, where she majored in women’s studies. After college, she worked as an account manager at a graphic design and printing firm in New York City and at a catering and events planning company in Connecticut. The client focus of these jobs, said Anastasio, is somewhat similar to her duties now, in that it involves explaining benefits to current and prospective members.

“I did similar work with my other jobs that were sales-focused, but I do feel more comfortable in this environment because the focus isn’t just about generating money and numbers. It’s really about helping people get the best experience,” she said.

Anastasio also worked as a bookseller at Bank Square Books in Mystic, Connecticut, and once a week at Savoy Bookshop and Café, in Westerly, Rhode Island, which Bank Square owner Annie Philbrick opened at that time.

While she has been to BookExpo as a bookseller, this year was Anastasio’s first time attending as an ABA staff member; she also assisted at this year’s Children’s Institute. Working at ABA, she said, allows her to remain part of the independent bookselling community, but gives her the chance to see things from the other side.

At conferences, she said, “I enjoy the open communication that we can have meeting face-to-face at BookExpo and Children’s Institute. It’s a good way to get suggestions for what booksellers need — you get more than if it was just over e-mail.”

Anastasio told BTW that The Goldfinch by Donna Tartt is one of her favorite novels, but she also enjoys nonfiction: “I particularly like books about food, like The Third Plate by Dan Barber, and I love to read cookbooks. My two-year-old niece and I read Lady Pancake and Sir French Toast by Josh Funk multiple times a week (I can probably recite it from memory).”
Booksellers can reach Choi via e-mail at stephany@bookweb.org or by calling (914) 406-7569, and Anastasio can be reached at lauren@bookweb.org or (914) 406-7541.
Categories:
Industry News
About ABA
Membership
Education
Search BTW
Advertisement