Jan Weissmiller, co-owner of Prairie Lights, told Bookselling This Week that an organizer from each politician’s campaign contacted the store to request an event.

Williamson’s event was coordinated by Brent Roske, director of her 2020 presidential campaign. The event was promoted as a discussion of Williamson’s history, her books, and her ethics, Weissmiller said. While Williamson didn’t have a new book just yet at the time of the event, it served to promote A Politics of Love (HarperOne), which will be released this month. Prairie Lights also sold her backlist titles at the event; Weissmiller said the bestseller of the afternoon was Healing the Soul of America (Simon & Schuster). “[Williamson] was a politically informed and charismatic speaker,” Weissmiller said.

Joe Feldman, an organizer for Andrew Yang’s 2020 presidential campaign, also contacted Prairie Lights with a request to hold an event at the store. The event centered on Yang’s 2018 book, The War on Normal People (Hachette). “His campaign was remarkably effective in bringing people out,” Weissmiller said. “He is smart, funny, and seemingly pragmatic.”

Both events were extremely well-attended, according to Weissmiller. “Our events space seats 150 [people] and we had standing-room-only crowds for both events. We weren’t even able to accommodate all of the people who wanted to attend Andrew Yang’s talk,” she said. 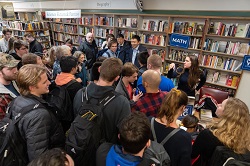 Weissmiller added that Prairie Lights also sold books at an event with 2020 presidential candidate Pete Buttigieg, which was hosted by the UNESCO City of Literature at the Iowa City Public Library. “That, too, was a standing-room-only crowd in a venue that seats 250 [people],” she said. “Book sales were brisk.”

Weissmiller said that these events are usually attended by supporters of the candidates. “Their campaigns reach out to area citizens through social media,” she said. “We, of course, publicize their events through our normal routes — website, university listings, newspaper and social media — but the crowds are much larger when the candidates’ backers publicize the events, too.”

She added that the demographics of the audience are somewhat dependent on the candidate.  While Andrew Yang drew mostly from a young crowd, “informed and committed Iowa City Democrats from other generations” also attended, she said. Marianne Williamson has a following for her inspirational books and those readers were a large part of her audience, Weissmiller noted, and she, too, brought with her a diverse audience.

These events are important to the community because they “introduce the candidates to an attentive audience,” Weissmiller said. “They enable that audience to listen closely to policy points and ask questions in a reasonably intimate environment. They are, therefore, informative in a way that more frenzied rallies are unlikely to be.”