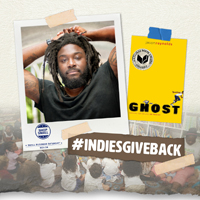 Award-winning author Jason Reynolds, who is serving his second term as the 2018 Indies First spokesperson, will launch the “Indie Bookstores Give Back on Small Business Saturday” campaign (#IndiesGiveBack) at Miami Book Fair at Miami Dade College on November 15, 2018. Over the course of several days, Reynolds will participate in school presentations across Miami, where he will address 600 students, most from Title I schools. All students will take home an “Indies First/Small Business Saturday” paperback edition of Ghost, the first book in his New York Times bestselling Track series. At the festival, Reynolds will also take part in a public talk and book signing on Sunday, November 18, to promote the release of Lu, the final installment in the four-book series (visit MiamiBookFair.com for more details in the coming weeks).

Over 500 independent bookstores have signed up to participate in the #IndiesGiveBack campaign, for which the American Booksellers Association and American Express are working together with Simon & Schuster Children’s Publishing to make available 20,000 special edition copies of Reynolds’s Ghost to young readers in underserved communities this holiday season. Through the initiative, participating independent booksellers will receive a free box of special “Indies First/ Small Business Saturday” paperback editions of Ghost, to distribute to children on or around Small Business Saturday®, which takes place on November 24. Stores that participate in this giveaway will also be invited to enter to win one of two in-person visits from Reynolds in 2019.

Of his second term as Indies First spokesperson and of the #IndiesGiveBack campaign, Reynolds said, “Bookstores benefit their communities in a myriad of ways, and I’m thrilled that I get to sing their praises for another year. I’m grateful and honored that booksellers have this opportunity to share Ghost’s story with thousands of young people across the country who don’t have access to books they feel connected to.” Reynolds will support Small Business Saturday by participating in an event at an independent bookstore in Washington, D.C.

In a letter to readers printed on the special edition of Ghost, Reynolds says, “My hope is that you and Ghost become friends. That his story and yours mix and mash and become a new tale — one of reader and book. A tale of familiar and far away. A tale of Maybe reading isn’t the worst thing on Earth. A tale that belongs to you.”

A 2016 National Book Award Finalist for Young People’s Literature, Ghost is the story of Castle Crenshaw (a.k.a. Ghost), a young man who wants to be the fastest sprinter on his elite middle-school track team, but whose past keeps slowing him down. The recipient of four starred reviews, the book is nominated as one of America’s best-loved novels by PBS’s The Great American Read.

Indies First, launched by the American Booksellers Association in 2013 and held each year on Small Business Saturday, the Saturday after Thanksgiving, brings together authors, readers, and publishers in support and celebration of independent bookstores.

November 24 will be the ninth annual Small Business Saturday (#ShopSmall, #SmallBizSat). Dedicated to supporting the diverse range of local businesses that help to create jobs, boost the economy, and enhance neighborhoods around the country, Small Business Saturday was created by American Express in 2010 in response to small business owners’ most pressing need: getting more customers. Learn more at ShopSmall.com or connect on Instagram or Facebook.