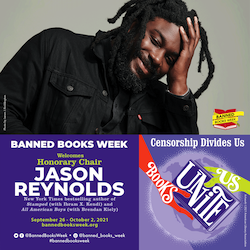 On April 13, the Banned Books Week Coalition announced that Jason Reynolds has been named the inaugural Honorary Chair for Banned Books Week 2021. The New York Times bestselling author will headline the annual celebration of the right to read, which takes place September 26–October 2, 2021, and features the theme: Books Unite Us, Censorship Divides Us.

Reynolds is the author of more than a dozen books for young people, including All American Boys (with Brendan Kiely), Ghost, Long Way Down, Look Both Ways: A Tale Told in Ten Blocks, and Stamped (with Ibram X. Kendi). A multiple National Book Award finalist, Reynolds has also received a Newbery Honor, a Printz Honor, an NAACP Image Award, and multiple Coretta Scott King Award honors. He is currently serving a two-year term as the National Ambassador for Young People’s Literature for the Library of Congress.

“I’m excited about being the inaugural Honorary Chair for Banned Books Week,” said Reynolds in the Banned Books Week Coalition’s announcement. “More importantly, I’m excited about this year’s theme, which is so simple, yet so powerful. What does it mean when we say, ‘Books unite us?’ It means that books are the tethers that connect us culturally. Stories ground us in our humanity; they convince us that we’re not actually that different, and that the things that are actually different about us should be celebrated because they are what make up this tapestry of life.”

Since it was founded in 1982, Banned Books Week has highlighted the value of free and open access to information by drawing attention to the attempts to remove books and other materials from libraries, schools, and bookstores. Despite their accolades, Reynolds’ novels aren’t immune from censorship. All American Boys and Stamped, both of which address racism and police brutality, have been challenged repeatedly and are among the American Library Association’s Top 10 Most Challenged Books of 2020, an annual list released during National Library Week in early April. ALA’s Top 10 list included other books on racial justice, highlighting a growing trend toward attempts to censor stories by Black, Indigenous, and people of color. Further, several state legislatures are considering laws that would limit instruction related to antiracism and social justice, negatively impacting the availability of material by Reynolds and other authors addressing these issues.

“To censor a book is to damage the framework in which we live,” added Reynolds. “Any time we eliminate or wall off certain narratives, we are not getting a whole picture of the world in which we live. And navigating the world in a way that is closed-off, closed-minded, is poisonous. It means that we limit our vocabulary, which complicates how we communicate with one another. We have to celebrate stories and ensure that all books have a space on the shelves and the opportunity to live in the psyches of our children, as they grow into the human beings who will inherit this wonderful place.”

Join Honorary Chair Jason Reynolds to celebrate the ways in which books unite us during Banned Books Week. Visit bannedbooksweek.org or follow @BannedBooksWeek on Twitter to get the latest Banned Books Week news leading up to this year’s celebration.