At BookExpo America’s Opening Day Spotlight, before a packed house, Jonathan Franzen, author of The Corrections and Freedom (Farrar, Straus and Giroux), discussed his new book Purity (FSG) in a conversation with Salon staff writer and co-founder Laura Miller. 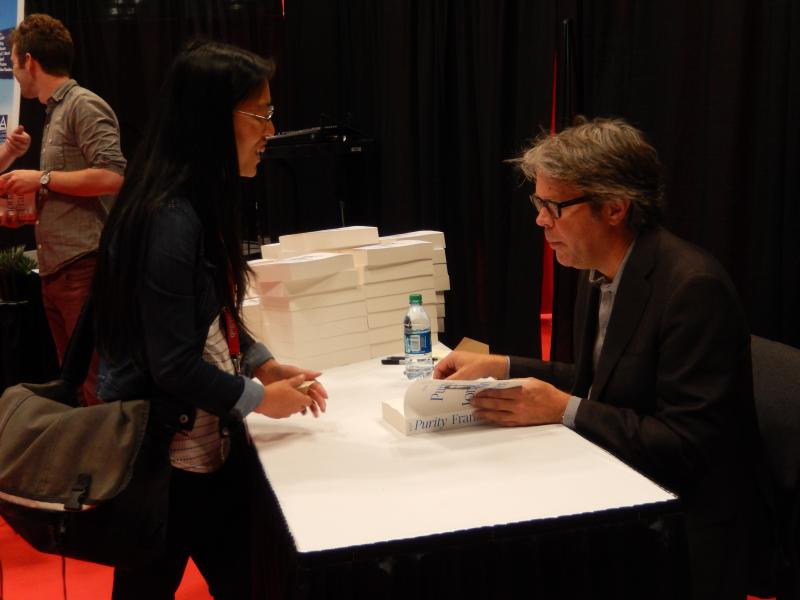 At the session, which took place on Wednesday, May 27, at the Javits Convention Center in New York City, Franzen shared some of what he has learned about writing since his career as a novelist took off in 2001 with The Corrections, for which he won the National Book Award.

“I think the situation for the writer is that it gets harder to write novels, not easier, as time goes by, and that has to do with using up the easy stuff, the stuff that’s very close to the surface,” Franzen said. “I think maybe [with Purity] there was a wish to go for the stronger story formulations, more extreme situations to try to get the energy up, to kind of blow the lid off [what was deeper], I would say.”

Their conversation delved into the writing of Purity, which, Miller pointed out, is a departure from Franzen’s other two well-known earlier works that are less plot-oriented and more character-driven.

Franzen said that when he wrote The Corrections, “I was not fully in control of what I was doing. I was just kind of desperately doing what I could do and hoped it was adequate. I guess that’s actually what I’m still doing.”

“I actually turned against plot very, very consciously and deliberately in the course of getting The Corrections written. Plotting is easy,” added Franzen, who said he grew up reading the very plot-driven science fiction novels of Robert Heinlein and Isaac Asimov. “Story is not the same as plot. Story is really simple; story is situational and character-driven.”

Franzen’s new book, set in such varied locales as California, Berlin, and Bolivia, tells the story of Purity “Pip” Tyler, a troubled but spirited girl in her 20s whose work at a WikiLeaks-type online journalism project, run by an enigmatic European, leads her on a series of adventures, including a tumultuous love affair, and encounters with governmental corruption.

Franzen, who has written for newspapers in his career, noted that his book does, as Miller suggested, show a respect for investigative journalism and truth-telling.

Fiction and journalism are “nice complements for me,” Franzen said. “The problem with fiction writing is it shuts you in...so [with journalism] it’s nice to get out in the world, but also, certain kinds of essayistic and political argumentation is much better done in nonfiction form.”

The process of writing a novel like Purity, he said, entailed a lot of discovery. “You have to wing it. If you don’t wing it, then it seems like it’s written from an outline, and the idea is to sort of set yourself some impossible kind of place to get to, and then it becomes an adventure.”

Later on in the hour-long discussion, Miller brought up Franzen’s curmudgeonly reputation born of statements he has made in his books and in the media, but the author denied being a misanthrope.

As a writer, there is tension between two imperatives, Franzen said, “to make a book that can matter to someone. At the same time, the writer’s job is to tell the truth, and we live in a world of cant, of received opinion and widely shared ideologies, and the writer who is not satisfied with those sometimes simplistic ideologies is going to end up seeming to be in opposition to the vast majority of people who hold those opinions: ‘Most people believe this; he attacks this; he must not like people.’”

During a question-and-answer period, Franzen listed the three keys to his life as a writer that help him “avoid going the way of Hemingway,” as the asker put it: “California, loyalty, birds.”

It is well-documented that Franzen has become enamored of bird watching of late; in fact, he recently returned from a bird watching trip in East Africa. “I can look at a bird and be happy, and I can do that anywhere,” he said.

Following the morning’s opener, Franzen participated in an event unrelated to BEA organized by PEN American Center: the Rally for Silenced Chinese Writers on the steps of the New York Public Library, where he joined Paul Auster, Francine Prose, and other writers from America and China to protest the imprisonment of 40 Chinese writers in their home country.