Independent booksellers across the country have chosen Libertie: A Novel by Kaitlyn Greenidge (Algonquin Books) as their top pick for the April 2021 Indie Next List. 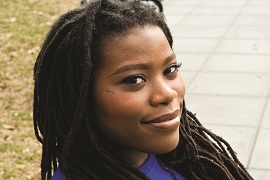 Libertie Sampson knows her future: go to medicine school, return home, and practice alongside her mother, one of the first Black female physicians in the United States. But that’s not what she wants for herself — it’s what her mother wants.

When a young man from Haiti gives her a way out of Reconstruction-era Brooklyn, she takes it with the promise that she’ll be his equal on the island. But in Haiti, autonomy slips further and further out of her reach. As she navigates her marriage and place in the world, Libertie struggles to figure out what freedom really means for a Black woman, and where she must go to find it.

“Libertie is a beautifully written, immersive historical novel inspired by the story of a Black doctor and her daughter who lived in a free Black community in Brooklyn during the Reconstruction era,” said Alyssa Raymond of Copper Dog Books in Beverly, Massachusetts. “It is also a profound meditation on what it means to be truly free — whether born free or formerly enslaved, whether in America, Haiti, or Liberia — while struggling against grief, sexism, racism, colorism, or classism. Libertie’s quest to forge her own path is a much-needed inspiration!”

Kaitlyn Greenidge: I worked for many years at a Black historic site called the Weeksville Heritage Center. It’s dedicated to the history of a free Black community in Brooklyn. One of my jobs there was to work on their oral history project. I interviewed a descendant of Dr. Susan Smith Mckinney Steward, the first Black female doctor in New York State, and she told me this incredible story about her ancestor and her daughter. The descendant was named Ellen Holly — she is a famous actress and wrote all about this in her own memoir, One Life. When I sat down to write the book, I changed many details — including the time period the story was set in and other things as well. But that was where the idea originally came from.

BTW: Can you tell me about your writing process? What was writing this book like? 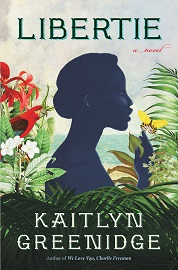 KG: I’ve always worked at least two to three jobs, so I write whenever I can — I think it does a disservice to yourself and the inevitable changes that come with life to get too intent on a set routine. I had two fellowships while writing this book, which was new — one at Radcliffe, the other at Princeton. But I was also writing freelance while writing this book when at Radcliffe, and at Princeton, I had just had a baby. So my process is very much: write whenever you are able because life takes over quickly.

BTW: This story is centered on Libertie Sampson. How did you craft her character?

KG: One of the things the book ended up being about was the emotional toll of Black Excellence — when you have bought into the lie that white supremacy tells you that you must be continually excellent and perfect and superior to even get basic respect — what does that pressure do to your inner life and your most intimate relationships? It quickly became clear that to explore that, the doctor had to have a daughter. That’s where Libertie came from.

KG: I really enjoy research, so I read a lot of histories of Haiti and also histories of Black American travelers in 19th-century Haiti. I tried to read what I could about how Vodoun is used as a community practice, as well.

BTW: Libertie explores the question of what freedom really means for a young freeborn Black woman in the Reconstruction-era North through the lens of a coming-of-age narrative. Can you talk about intertwining these two experiences?

KG: Libertie as a character is trying to make sense of herself and the world she’s been born into. It’s a world that is rapidly changing. She has seen the impossible in her lifetime — the fall of the system of chattel slavery in the U.S., a system, at that point, that was nearly 400 years old. As such, she grows up in a world with incredible promise. But, of course, Reconstruction is the story of white backlash to Black freedom — a very old story. So, she’s caught between these two currents.

BTW: We get bits of her mother’s perspective through letters. While writing, did you think about including her POV? If so, why did you leave it out, and if not, why focus solely on Libertie?

KG: The doctor is a much more interesting character when viewed from the outside. I’ve done enough oral histories and also read enough biographies that exceptional people are very rarely able to describe their lives in compelling terms. It’s often, “It had to be done, so I did it.” To get at that kind of stoicism, the doctor couldn’t be the narrator.

BTW: What is one thing you’d hope readers take away from this story?

KG: I hope readers begin to rethink what freedom could mean. I hope it inspires Black readers to think about what we mean when we ask for liberation — whether we want to truly imagine a better world, or only want the restrictions of this one, but to our advantage.