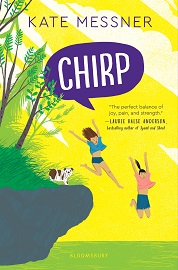 Indie booksellers across the country have chosen Kate Messner’s Chirp (Bloomsbury Children’s Books) as one of their top picks for the Spring 2020 Kids’ Indie Next List.

Messner’s newest book follows a young girl named Mia as she adjusts to her new life in Vermont. But making friends before school starts isn’t the only thing on Mia’s mind — she’s also trying to solve the mystery of who is trying to sabotage her grandmother’s cricket farm. And she’s also hiding a painful secret, one she’d rather forget.

“Mia is not too happy about moving to Vermont after seventh grade, especially with a broken arm, but she makes friends, finds her spirit, and helps to solve mysteries regarding her grandmother’s cricket farm,” said Gail Meyer of The Bookstore Plus Music & Art in Lake Placid, New York. “Mia has her own secrets, too, and it isn’t until she finds courage in other people’s stories that she can confront her fears. Messner is unparalleled in understanding young people’s minds, and her skillful and sensitive handling of difficult topics and situations makes this story one both young people and adults will be glad they read.”

Here, Bookselling This Week talks with Messner about cricket farms, entrepreneurship, and dealing with sexual harassment.

Bookselling This Week: Why did you choose a Vermont cricket farm as Chirp’s setting? 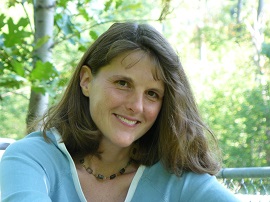 Kate Messner: I’ve been fascinated by the idea of entomophagy (eating insects as food) ever since I read a 2013 report from the United Nations Food and Agriculture Organization called “Edible Insects: Future Prospects for Food and Feed Security,” about the benefits of eating insects, both for our health and the health of the environment. I was fascinated by the notion that we know crickets to be a healthy, sustainable protein, and yet in the United States, many of us are reluctant to try them. After I visited a startup cricket farm in Vermont, I knew this was something that would be fascinating to explore in a book for kids, so I spent several days there, shadowing the cricket-farmer-in-charge, learning all about the daily chores of a cricket farm and the potential pitfalls. It made for a fascinating science-infused setting for a mystery!

BTW: Mia learns about entrepreneurship and innovation through a local camp as well as reality television shows. Why did you decide to explore the intricacies of business through the eyes of a 12-year-old girl?

KM: Kids are amazing innovators. So often, they don’t have that voice of negative experience that shuts down fresh ideas by whispering “that’s not possible.” When they have an idea, they’re excited about it, and so often, they can find ways to accomplish seemingly impossible things. They’re also not afraid to fail in the same way many of us are as adults. With more and more young people launching their own businesses before they’re even out of high school, this seemed like another way for Mia to not only connect with her grandmother’s cricket farm but also to build the confidence she needs to face her own struggles.

BTW: Over the course of the story, Mia goes from wanting to sit alone inside to regaining the confidence she needs to make friends, be active, and pitch a business proposal. This personal journey is paired with the mystery of who might be sabotaging the cricket farm. Why did you decide to explore these two stories in tandem with one another?

KM: Mia’s story of finding her voice is a story I thought I’d write someday, but at first, I didn’t realize it was going to be the same book as the cricket-farm mystery. That revelation came to me during one of my visits to the cricket farm in Vermont. I’d walked into the warehouse where a million crickets had just reached maturity, and the chirping that filled the air was like the most intense summer night you can imagine, times a thousand. As soon as I stepped inside, I said, “Whoa! So that’s the sound of a million crickets!”

“Actually, half a million,” said Steve, the cricket farmer. “Only male crickets chirp. Females are silent.”

Mia was already very much alive in my imagination at that point. That detail brought her to the surface — and stopped me in my tracks. How would a girl keeping a painful secret process that scientific detail? How might she process that metaphor as she regained her strength and her voice? That was when the two storylines really came together.

KM: Like many women, I’ve spent a lot of time in the past few years reliving tough memories related to the #MeToo episodes in my life. For many of us, it starts when we’re still girls, feeling powerless to do or say anything about what’s happening because society has already taught us that our voices don’t matter, that it’s best to be quiet and move on. And like many women, I’m not willing to be quiet anymore. More than ever, I believe we all need to be talking about these issues, so our kids know that their voices matter, that they can speak up when an adult’s attention makes them uncomfortable, and that when they do, we’ll be there to listen and take action.

BTW: One of the ways Mia learns to deal with the reality of sexual harassment and inappropriate touch is by forming closer bonds with the women and girls in her life. Can you talk about the importance of community for young children?

KM: When we quietly censor books that deal with issues like this, we’re leaving kids alone in the dark, without the sense of community they need for support. It’s devastating, and it happens a lot. Even on my recent book tour, promoting a novel that’s garnered five starred reviews for its handling of a difficult topic, a handful of schools quietly canceled visits, deciding that they didn’t want to have those honest conversations with their students.

That leaves kids who have been carrying around a secret like Mia’s feeling as if they’re all alone, and it’s simply not true. Stories are one of the safest, most wonderful ways to enter into important but tough conversations with young people. As adults, when we have the courage to do that, we let young people know they’re not alone, and that can be everything — everything — to a kid who’s been feeling confusion and shame and isolation over something they thought only happened to them.

Keeping stories like this from kids is a refusal to arm them with not only the courage they need to speak up but also the information they need to recognize when an adult is acting inappropriately. It enables abusers and harms children. Kids need caring, honest adults to talk with. They need to know they’re not alone. They need to be protected from predators — not from stories.