A.S. King on Community and Passing on the Gift of Hope 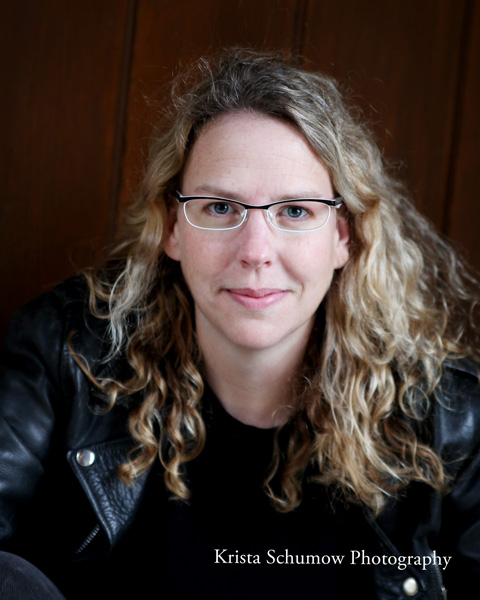 Thank you, NAIBA, for the kind invitation to come speak at this lovely breakfast. If you know me, you know I’m usually the one who cracks jokes at times like this, but this year it’s going to be a bit different.

The last time I was at NAIBA, I addressed a dinner crowd, and I told a few stories about what community means to me.

I talked about a family-owned and operated hardware store in my hometown called Leinbach Hardware and how when I wanted to build an oven out of a cardboard box old Mr. Leinbach helped me measure out my wire and explained the basics of wiring light sockets, and I explained how he didn’t seem to care that I was a girl who wanted to learn these things — he just helped me. I’m sad to report that Leinbach Hardware store has since closed. It’s been replaced with a box-store pharmacy. Oh well.

When I was growing up, there was also a family-owned diner called Fegley’s Diner that was a mile from my house. My best friend and I were allowed to walk to it on the last day of school every year to eat grilled cheese sandwiches at the diner bar inside the historic train car part of the diner. When they knocked it down a few years ago, they saved the train car, at least, and moved it across town to be preserved. It was replaced with a box-store pharmacy. Oh well.

Across the street from Fegley’s Diner, there was the family-owned Dutch Colony Motor Inn. I used to beg my parents to take us to eat there because in the dining room there was a real airplane suspended from the ceiling. I was lucky enough to get my first lifeguard job at Dutch Colony Motor Inn and swam many laps in the pool when business was slow. It is now the site of a box-store mall with at least two pharmacies. Oh well.

When I drive down the two miles of what used to be my town, I don’t really see a community anymore. I see a big box. I wonder what it’s like to grow up inside of a box. I don’t reckon it’s very warm or personal.

And I don’t understand why we need so many pharmacies … unless as a culture we’re overmedicating ourselves because we all live in a box now.

When I started writing Glory O’Brien’s History of the Future, I was in Omaha, Nebraska. I was working with three classes in an urban high school for two days, presenting a workshop about revision. When I asked the students to write something, I wrote something too, so I could show them how to revise and make their work stronger. And what I wrote was the first page of Glory O’Brien’s History of the Future. Since that first page references drinking a bat and eludes to what happens after, they looked at me a bit oddly at first, but then they said, “What happens next?” and I said I’d just written something off the top of my head, like they had. They told me I’d have to finish the book one day so they would know what happens.

And then it was time to look at their work. These students, from freshman to seniors, wrote these dark, authentic stories that — I discovered as I read — were really their own stories posing as fiction. The pieces, filled with abuse, neglect, pain, death, and survival, were hard to read. Everything you never wanted to know from the minds of teenagers — all true. Suddenly, my revision workshop turned very serious. It made me think back to articles written about young adult novels that claimed the content was too dark or too profane, and I realized that young adult authors owe these kids the truth because these kids are already living it. They are growing up in that box. They have no one to talk to. Nothing to call a community in the way I had. So over the next year, I finished writing the book I’d started because they asked me to. Maybe I could be their community simply by hearing them and giving them something from my heart.

I think that’s what communities do. I think they give heart. And as independent booksellers, I know you give heart because I wouldn’t have been able to give this book to these kids if it wasn’t for your enormous support over the last six years. No matter if you’re from Virginia or New York, you’re allowing authors like me — not a commercial big shot, but just a lady who wants to tell the truth — to reach out to readers who need my work and who eventually send me letters about how I help them. Since I wouldn’t be an author without the support of independent booksellers, I reckon these letters are to you as much as they are to me. So I want to share a few with you so you can understand the effect you’re having on people around the world.

“I just finished Reality Boy. And I cried and cried and am still crying about the texts from Hannah’s mom. I’m 25, and I did two years of study online so that I could stay home to take care of my mom. I love her, but she has issues. It was really hard. I, too, said, ‘If I leave, she’ll die.’ And my friends said she wouldn’t. And she didn’t. I read Reality Boy because I wanted to know about Gerald, and his story gripped me, but I wanted to thank you for Hannah, too. My mom may never say she’s sorry. I never imagine her doing so. But Hannah’s mom did. You have no idea how much that means to me.”

“Hello. I just finished reading your book Everybody Sees the Ants. It struck so many emotions with me. My grandfather (who also had a military background) died when my father was a child. Because of it, his fathering me was heavily affected. There were even the frustrating moments when ‘I didn’t have a father, how do you expect me to be one?’ was verbalized. Reading this story, I felt like I was reading about myself and the life I’ve lived through my childhood and teen years. Your story will forever leave its mark on my heart.”

“Hello. I was physically and emotionally abused by my aunt (my mother’s sister) when I was growing up. While the physical abuse was bad, the emotional abuse was even worse and resulted in terrible long-term effects that I am suffering even now at the age of 30. After reading your books, I had the courage to speak to my mum and ask her why she did not protect me from all the abuse. My mum denied having known anything, yet my brother and I complained to her on a number of occasions when we were younger. My mum eventually admitted that she did not want family trouble and therefore she did not stand up to my aunt. I forgave my mum but I felt like a huge weight lifted off my shoulders since I was able to confront her about this and ask her why she did not protect me when it was her job to do this as a parent. I love my mum but I feel cheated because of my past. I am an adult now and having read two of your books, I feel like I can make my own choices now. Thank you for showing me that I can change my future.”

And this is what Glory O’Brien wants to do. She wants to change her future, even if she isn’t around to experience the changes. She is looking out for her community and future communities when others are trying to rip them down. She has hope. All of my characters have hope. And passing on that hope to readers is a gift I wouldn’t be able to give if it weren’t for all of you.

Last year I moved to a new town. This is the first time I’ve ever lived in a town with a real independent bookstore, and my life has changed for the better. I used to have to drive 45 minutes to get there. Now it’s a 10-minute walk to a place where I feel that people understand me. My kid now goes to a dream school that has changed her life. Why? Because if Aaron’s Books hadn’t had the guts to start a Kid & Teen Lit Festival in our little tourist area, then I wouldn’t have ever visited that school … which eventually led to our enrolling her there, which eventually led to us moving there. So, when people ask me why I moved to Lititz, Pennsylvania, I tell them I moved there because of Aaron’s Books.

We all have something in common. We have hope. We have heart. We are a community. None of us can afford nannies or chefs yet, but we’re not doing it for nannies and chefs. It’s heart. We do it for the heart.

You all gave me my dream. How do I thank you for this? I reckon I should just keep writing more books. And I should take opportunities like this one to say thank you. Thank you. From my readers and from me and my family. You give us all the opportunity to not live in the box. I will be forever grateful. —A.S. King

A.S. King is the award-winning author of five previous novels. She also writes novel-length and short fiction for adults. Learn more at as-king.com.