Five years ago, Brenda Eng had just moved to Hawaii and was looking for a new career. After talking to her friend Joy Vogelgesang, whom she met at a book club years earlier, she decided to open a bookstore. Knowing they both shared a love for books, Vogelgesang joined Eng on the big island of Hawaii, where they opened Kona Stories in Kailuna-Kona.

Kona Stories is a general bookstore selling new and used books, which caters to 60,000 people living on the west side of the island, as well as tourists who visit the town in winter. The store specializes in Hawaiiana-oriented books and top-selling sidelines are locally made items, such as greeting cards.

In November, Kona Stories will be celebrating five years of business.

“We think what makes us unique is our ability to tailor our selections to the local interests, and our personal service,” said Vogelgesang. “And our cats.” Noble and Shadow, the store’s official greeters, enjoy attention from customers, and people often come into the store just to pet the cats. Eng added, “The cats are in the marketing budget, and they definitely earn their keep!”

When they opened Kona Stories, there was a Borders in the town, and Eng and Vogelgesang were not completely sure there was a market for another bookstore. They remained hopeful, knowing that their location would work in their favor. The 1,500-square-foot store is located in a small shopping area within a courtyard. “We have a beautiful ocean view with a spectacular sunset every evening,” said Eng.

Last month, the town’s Borders closed, and Eng and Vogelgesang are making it known to their customers and Borders’ former customers that Kona Stories is still at their service.

“We see [the store] growing and expanding to meet the needs of the community, now that we are the only bookstore in town,” said Vogelgesang. 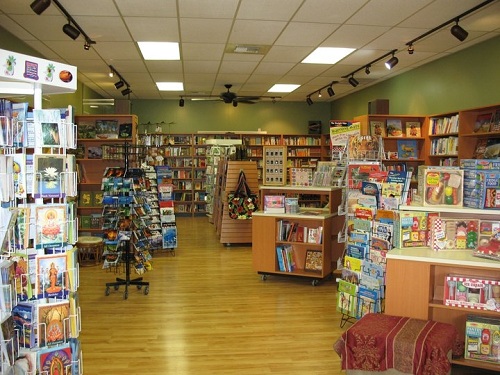 Kona hosts many different events, including several book clubs, a game night, and an open mic. The store’s biggest event is “Words & Wine,” where community members are invited to “talk story,” a Hawaiian phrase meaning to chat. A few local authors are invited to discuss their books, and complimentary pupus (Hawaiian hors d’oeuvres) and wine are served.

“We’ve found this makes for a good turnout as we ask each author to promote the event, in addition to the promotion we do,” said Vogelgesang.

Kona Stories gets the word out about their events through press releases, Facebook, and e-mail newsletters, in addition to several of the island’s tourist publications. In the wake of their local Borders closing, Kona Stories is increasing its advertising efforts, extending its reach through radio and newspaper advertisements.

Recently, Kona Stories e-mailed a survey to customers as a way to gain some feedback. The owners detailed the results of the survey in the store newsletter and explained how they plan to address these needs in the future. Among their findings were that 47 percent of the participating customers purchase more than a dozen books per year and most shoppers’ favorite things about Kona Stories are the cats and the owners. Several survey-takers requested a store expansion, to which the owners responded: “We actually have plenty of room in the store to add more books. We’ll look at getting bigger once we feel we’ve gotten the maximum out of our current space.” Many people expressed interest in purchasing more used books, as well as mystery, biography, science, and other nonfiction titles. 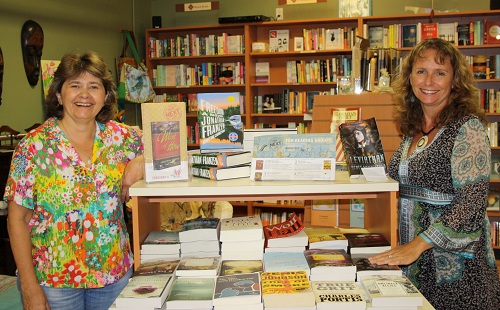 Though the survey took a lot of effort on the part of the owners, Vogelgesang said the best part was that it reinforced their customers’ sense of involvement and “ownership” of the store, which is particularly important to the owners now that Kona Stories is the town’s only bookstore.

Though they haven’t decided how they will celebrate the Kona Stories’ fifth anniversary, Eng and Vogelgesang have big plans for the store. “We see [the bookstore] becoming a ‘must visit’ place in Kona and the local’s favorite place to be,” said Vogelgesang.