“We were all deeply affected by the tragedy,” said Left Bank co-owner Kris Kleindienst, who noted that some of the store’s employees live in Ferguson and nearby areas. “There is a real hunger to put these events in some kind of bigger context, and to do something.” Brown, an 18-year-old African-American man who was unarmed, was shot by a white police officer in Ferguson on August 9, 2014, prompting vigils, protests, and calls to end racial discrimination. 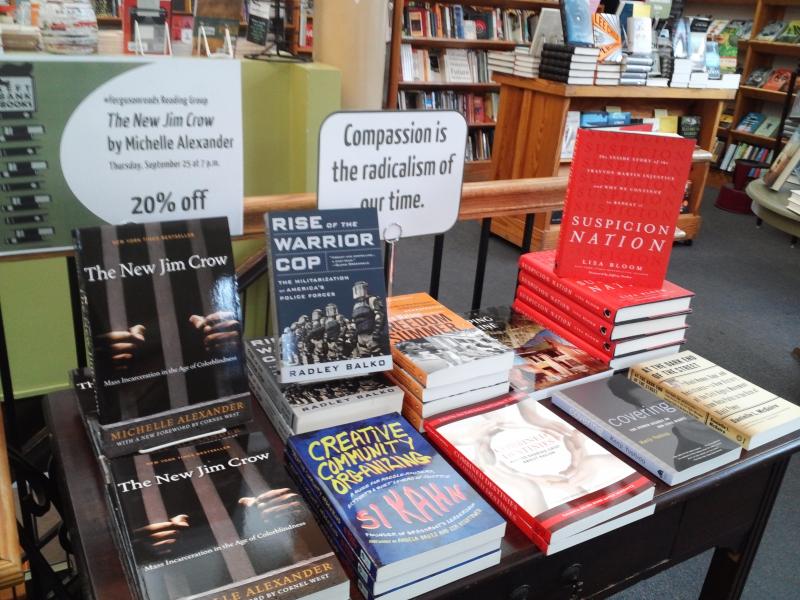 Many customers visiting the store spoke about the happenings in Ferguson, both because it was a difficult experience that they needed to share and because Left Bank had created a display of books and resources that seemed to spark conversations about the topic.

“Folks came in who probably didn’t expect anything. Maybe they just came in to buy a birthday card, then realized there was more here. They were surprised,” said Kleindienst, who, as customers continued to discuss the topic, began to see the need for a forum for conversation about the incident.

“Left Bank has always been committed to serving the whole community and we have tried hard to make our book selection, our events, and even our staff reflect our community,” Kleindienst said. “What happened in Ferguson was painful and appalling to all of us. But rather than sit by and wring our hands, we hope our reading group can contribute in some small way to ‘being the change’ we want to see happen.”

On September 25, readers participating in the #FergusonReads book club will gather to discuss The New Jim Crow by Michelle Alexander (New Press), followed by The Rise of the Warrior Cop by Radley Balko (PublicAffairs) on October 22. Both books are on sale at Left Bank at 20 percent off for their corresponding month. More resources, including online content and book lists by genre, are available on Left Bank’s website. The lists of books and resources are coming together based on booksellers’ recommendations.

Kleindienst expects the #FergusonReads book group to run once a month for about six months, and then she will reassess to see if there is a continued need for the group or if it requires any improvements or changes.

Left Bank asked for RSVPs from anyone who was interested in participating in the events, which are free and open to the public. The store has received about 75 responses since the announcement of the group. While Kleindienst is expecting some no-shows, store staff is brainstorming ways to manage whatever size group comes together for the discussion. Possibilities include breaking into smaller discussion groups or having multiple staff members facilitate the conversation. The store is also considering instituting ground rules to promote civility and respect due to the controversial nature of the topic.

“One of the strengths of independent bookstores is we function as ad hoc community spaces,” said Kleindienst. “This might be a really great chance to have some conversations that haven’t had anywhere else to take place.”