Lesley Stahl and Ann Patchett in Conversation at Wi12

Sunday’s breakfast plenary at Winter Institute 12 featured a conversation between authors Lesley Stahl, the longtime correspondent for 60 Minutes, and Ann Patchett, the co-owner of Parnassus Books in Nashville, Tennessee. 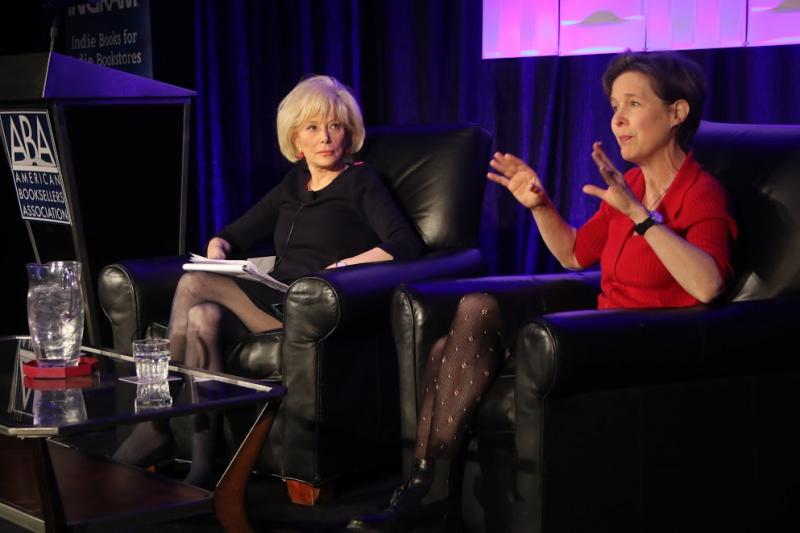 Stahl, one of America’s most recognized broadcast journalists, is the author of Becoming Grandma: The Joys and Science of the New Grandparenting (Blue Rider Press). Patchett is the bestselling and award-winning author of Commonwealth (Harper), The Patron Saint of Liars (Houghton Mifflin), Bel Canto (Harper), and other novels, as well as three books of nonfiction. Patchett and author James Patterson are the inaugural co-ambassadors for the nonprofit Book Industry Charitable Foundation (Binc).

Stahl and Patchett’s conversation touched on a variety of topics, including a memorable analogy comparing writing a story to coughing up a hairball, the benefits and drawbacks of having children, Stahl’s husband’s ambitions to bring a musical version of The Electric Kool-Aid Acid Test to Broadway, and whether or not 1984 deserves the hype it’s receiving in 2017. Here is a sampling of their conversation:

On the fabled death of both independent bookstores and network television news:

Stahl began the discussion with Patchett by connecting their respective industries, noting that there is a common (false) perception among many people that both the network TV news and book industries are failing.

“What’s happened in the book world also was happening in network television news and that is that a couple years ago they were writing our obit and telling us in television and in the book world that we were dinosaurs and we were virtually extinct, and we’re not; we’re back,” said Stahl. “The idea that Amazon was going to gobble up the world … was believed. And it’s as if you guys slayed the dragon in a way, because you are all doing wonderfully well. It’s exciting. People want to have a book in their hands. We just do. We want to feel it and turn the page; if we’re under-liners, we want to underline it. But I also feel it’s because of the work that you have done in your stores. People want a book recommended to them. I want, when I walk in, for someone to tell me what is the best novel for me.”

Patchett, on the other hand, said that at no time did she really feel like bookstores and the printed book were in trouble, especially after witnessing the enthusiasm of the readers she met while on book tours and at lecture engagements.

“Night after night I go out and see crowds of people who really care about books and literature and they are passionate readers. I never saw the dip firsthand and so I think I stayed in this bubble of good cheer and optimism that really allowed me and Karen to go forward and open the bookstore. I just never believed that reading was dead.”

Patchett said she read Becoming Grandma in preparation for Stahl’s visit to Parnassus Books in April, but admitted that a book called Becoming Grandma was not one she would pick up had she not been a bookseller. It turned out, though, to be an amazing and complex exposition of not only Stahl’s personal experience but the history of grandparenting and the role of grandparents in society.

This time, Patchett said, she was not at Winter Institute as an author or a bookseller but as booksellers’ representative to Binc, which provides emergency grants to booksellers in need, with an average grant of $2,200 last year.

Binc will help, she said, “if your kid gets sick and you have to take weeks off of work, if you can’t meet your deductible in your healthcare, if you have funeral expenses in your family, for homelessness prevention, and domestic violence,” she said. “All of us are looking for something that we can do to feel empowered and feel that we are part of a community. Do it through Binc.”

In Patchett’s store, a 29-year-old bookseller was diagnosed with Stage 3 breast cancer, and Patchett was able to help her pay her deductible and pay for drugs that weren’t covered. Patchett exhorted bookstore owners to sign on to become a member and donate $20 a month, and suggested that booksellers could donate $10 a month.

“All of my books have been the same book… It’s a group of strangers who are thrown together by circumstance and form a society or a family,” she said, from Bel Canto to Commonwealth to State of Wonder and Patron Saint of Liars. “I don’t mean to do this. Every time I think I’m writing something entirely different and then I finish it and I read it and I think, ‘Wow, that’s amazing, it’s the same book,’ so my thinking was, if I wrote a book that was closer to home then maybe I would be free and then maybe the next book would be different. We shall see.”

Patchett told Stahl she believes that creativity is something everyone can access and pointed to her own sister as an example.

“My sister, who is such a creative and talented person, can make a chest of drawers where the drawers all come out; she has jigsaws and table saws; she added a bathroom onto her house, she makes the gingerbread chalet,” said Patchett. “I think that we all have a lot of creative energy and that for me, all of my creative energy goes into one thing: I write books. For my sister, it is diffused throughout her life. So if I wasn’t writing a book I think I’d be making better gingerbread houses.”

On the writing process:

While some authors talk about their characters taking them along as they write and essentially writing the story for them, other authors map out the whole book ahead of time. Patchett counts herself as part of the latter camp, tending to work things out in her head.

“My characters do not take over,” she said. “I have both hands on the wheel the entire time and I do all the work myself; they do nothing. I go to my computer in the morning and I say, ‘Lazy characters! Worthless rotten characters who won’t write the book for me!’”

Other people’s characters seem to do all the heavy lifting, she joked. For Patchett though, the act of writing usually takes the form of an impulse to tell a story. “Sometimes a story gets caught in your throat and all of a sudden the whole thing just comes out like a hairball,” she said.

At 60 Minutes, said Stahl, she does about 16 to 20 stories per year, and each one takes anywhere from a week to a year to do.

“I can’t tell you how many people, friends and strangers, walk up to me and ask, when are you going to retire? I am still excited with every story I do. Each story for me is the same as what you get out of writing a book: you just get completely enveloped in it,” Stahl said. “I meet the most extraordinary people; if I do a story on a subject, I’m usually meeting the quintessential person in that field. And the stories that people tell me, one after the next, are little novels, and I love it.”

“Writing them up the stories is also spectacularly fun,” she added, “because it’s storytelling for us. We have to have a narrative, so every part of the process for me is enjoyable and I’m never as happy when I’m in the zone of my work.”

On a possible 60 Minutes feature on independent bookselling:

To conclude, Patchett pitched a story to Stahl for 60 Minutes: the health of independent bookstores. Describing it as a feel-good story, Patchett said, “Independent bookstores, contrary to everyone’s opinion, are doing well, because we need this, we need the community center, we need to come together, we need to have someplace to go. We can’t all sit in our rooms and type things on a computer anymore. There needs to be a 60 Minutes story about this industry and how surprisingly successful it is.”

In response, Stahl said that, maybe with the right news angle, independent bookstores might very well make for a future story on 60 Minutes.