A Letter From ABA President Becky Anderson: Maneuvering Through the Holidays 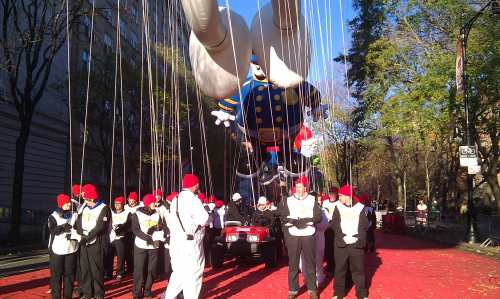 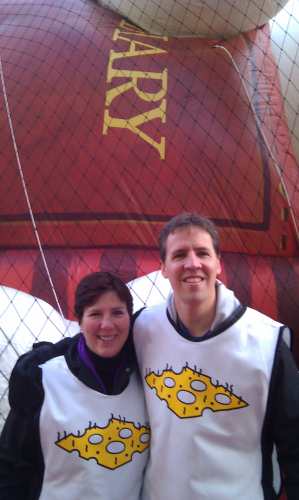 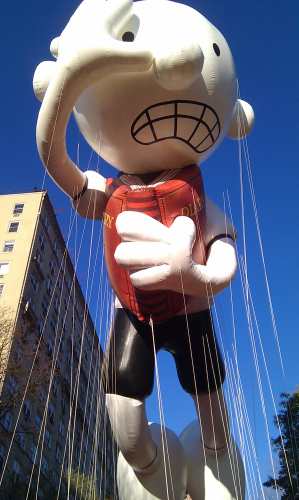 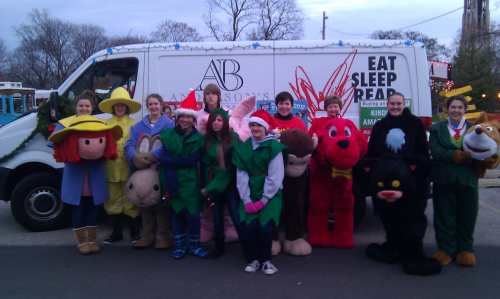 Holding Tight: How to maneuver your way through the holidays with balloons, parades, great visuals, and some friendly visits from your jolly congressional representatives!

I have to admit that I am not a big television parade watcher — never really have been a big fan — not even as a kid. I guess I had my fill marching in bands, where I played the clarinet from the time I was nine years old until I graduated from high school. Dread and loathing were usually my feelings leading up to a parade or a football game halftime. All that has changed for me over the last number of years, due to children’s books and the beloved, hugely popular characters that inhabit these stories.

“Don’t you love a parade?” that’s my mantra now. This was brought to a pinnacle for me just this past Thanksgiving. I was offered the opportunity to be a “balloon handler” for the Diary of a Wimpy Kid Balloon in the Macy’s Thanksgiving Parade! I owe this all to Jason Wells, executive director, publicity and marketing at Abrams Books for Young Readers, who asked me to join in the fun earlier this year.  This was the Wimpy Kid’s second appearance in the Macy’s parade — he debuted last year to huge applause. The balloon was initially Jason’s idea, and the whole Abrams team lead by Michael Jacobs made it a reality.

Author Jeff Kinney was a balloon handler this year along with his two brothers, Scott and Patrick. Jason was also there along with some of his fellow Abrams folks. It was fun to hang out with them and literally learn the ropes of the art of large balloon handling. To start the day, we had to be at the New Yorker Hotel at 5:30 a.m., where we showed our passes and I.D.s to get in to dress up in our balloon handler outfits — black jumpsuits with Cheese Touch white bibs and red stocking caps. We were then herded onto buses and brought to the beginning of the parade, where the balloons had been staged and blown up overnight. Instructions were given on how to maneuver our balloon, and we had to keep close watch of our pilot’s hand signals and whistle cues in order to keep the balloon going down the middle of the street. There was more to this job than I had ever imagined!

I think I had a huge grin on my face the entire parade route, with literally millions of people watching. It was quite a scene: Kids yelling for the Wimpy Kid. Cries of “I love that book!” Chants coming from the balloon handlers and then being picked up by the crowd. All of this joy over the love of these books and a character named Greg Heffley! It was amazing to see the power of a wonderful character cascading down these storied streets.

It was so cool to walk down the middle of streets that you have only seen from the sidewalk and to look up behind you and see this huge shape floating down Central Park, 42nd Street, Columbus Circle, 34th Street! I now can see why so many people make volunteering to be in the parade an annual family tradition. Thanks again to Jason, Abrams, and Jeff Kinney!

For years, I have been donning a Curious George costume, or sometimes Clifford, to be in our Naperville St. Patrick’s Day, Labor Day, and Hometown Holidays Parade, the day after Thanksgiving. I love to wear these costumes — passing out hundreds of high fives, handshakes, and hugs to little kids who think you are the real deal  — the book characters they love.  So give me a parade and make it about children’s books!

From the reports of many booksellers, Thanksgiving weekend was a busy time off of Fifth Avenue, too. This week’s BTW has a heartening report on the kickoff to the holiday season, and for everyone wanting to jazz up the look of their signage and other promotional materials for the holidays there are a number of new materials in the Booksellers DIY on BookWeb.org. The beauty of all of the DIY materials is that you can manipulate, change, and make them your own. Don’t forget to check out the holiday archive for other holiday designs, too. There are also some great new designs inspired by our indie bookselling colleagues in the U.K., Australia, and New Zealand in the DIY section. One of the designs under the bookmarks — “What’s in Here” — is from one of the best independent stores in New Zealand, Unity Books in Wellington. When I was there this summer, at the invitation of the NZ booksellers association, I saw this on their front windows and on their bags and thought how cool is that!

Make this a jolly e-fairness holiday by inviting your U.S. House representative and your U.S. senators in for a visit to your store during the holidays. What a great opportunity to host a gathering of your fellow community indie retailers for a meet-and-greet — an advocacy opportunity and a great press opportunity. With bills in both houses of Congress, we are getting closer each and every day. What our representatives need to hear are those ground-level stories from all of us and our neighbors on how sales tax inequity for online sales is affecting us right out of the gate. Jobs, communities, and desperately needed revenue are at stake. This past Black Friday, Internet sales were up 25 percent over last year and Cyber Monday was up 22 percent for a record $1.25 billion!!!! Think of all of that lost tax revenue and how we are losing due to tax unfairness.

Wishing you all increased sales, better bottom lines, and less anxiety for the rest of 2011 and into 2012! Happy Holidays and Happy New Year to you and yours!