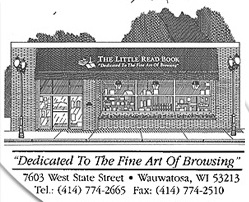 Llama manure may not be the reason The Little Read Book has just celebrated its 25th year in Wauwatosa, Wisconsin, but it's certainly one of the things that sets the store apart.

The store's commitment to and involvement in the Wauwatosa community, however, have clearly been the driving factor in its success. “We engage in all sorts of community activities,” said owner Linda Burg, as she squeezed in a few minutes to talk about The Little Read Book between a surprise visit from a longtime customer who had moved out of the area, and an evening full of town-sponsored activity.

“The police were just here picking up the Tosa's Night Out shirts,” Burg said, explaining that the store serves as one of the hubs for the annual event, which is affiliated with the National Night Out community policing program. In Wauwatosa, thousands of participants parade through the village with flashlights, pick up prizes donated by sponsoring businesses, and settle in for an evening of fireworks. “It's a way for the police department to embrace the community, and vice versa,” said Burg.

Being an active participant in the community has also led The Little Read Book to develop an expertise in local interests that is reflected in focused sections within the store, particularly Celtic literature. “We took over the sponsorship of the literary tent at Irish Fest,” said Burg, who noted that the event in nearby Milwaukee is one of the largest Irish-themed festivals in the country.

Burg, who opened The Little Read Book in 1985, looks at the book industry from a perspective shaped by long experience. “Way back when we started I remember people saying that videos were going to be the death of publishing,” she said, comparing those earlier warnings to concerns about the rise in e-books. While she knows that some of the store's customers are adopting e-readers, Burg thinks the store is well-positioned to meet the needs of its core customers: “The people that come here ... want referrals, want to talk books, want to buy books.”

Burg has been looking for unconventional ways to meet her customers' needs since the 1980s. “I checked out the competition before we opened,” she said, and when it was clear that a small independent bookstore would not be able to offer the same selection as chain stores, “we did something that was sort of naughty” and carried a large number of non-book items.

There was some early perception that carrying sidelines made The Little Read Book less of a “real” bookstore, but today, “there is no bookstore that doesn't have sidelines,” Burg said proudly. The store's mix of non-book items has changed over the years, but it has included many perennial favorites like stuffed animals and gift items – and also llama manure, courtesy of a llama farm run by Burg's sister.

“It's been a very interesting 25 years with all the changes,” said Burg.

To celebrate its anniversary, The Little Read Book offered 25 percent off a different section in the store each day for a week in July. “We had food all week” for customers, said Burg, including a friend's gift of a large plate of Vietnamese egg rolls. “I don't think there are too many customers who have gone into a bookstore and come out with an egg roll,” she said.

Burg admits she has “a real problem ... thinking about the future,” but not because of any concerns about the bookselling industry. She just doesn't want to retire any time soon. “I want to keep enjoying what I've enjoyed for 25 years,” Burg said. “It's still fun.”