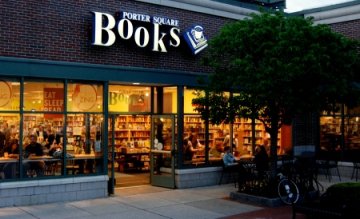 Porter Square Books, a general bookstore in a busy shopping center in Cambridge, Massachusetts, has changed hands. Longtime customers Dina Mardell and David Sandberg finalized their purchase of the nine-year-old store on August 18.

Mardell and Sandberg, who are new to the book business, met one another in a bookstore in the 1980s and moved to Cambridge in 1990. As they put down roots, became involved in area nonprofits, and raised two children, who attended local public schools, Porter Square became their go-to bookstore.

When the store was put up for sale in February, “we both had the same idea of how amazing this would be if we bought it and we decided to try to pursue it,” said Sandberg, though, “neither one of us had ever had any thoughts about owning a bookstore.”

With the sale finalized, Porter Square’s former owners have each decided on their own next steps. Porter Square founding owner Jane Dawson, who managed the store and its staff, will be retiring within the next few months. Buyer Jane Jacobs and Carol Stoltz, the children’s book buyer and manager, will be staying on for a while, but both plan to retire in the near future. General manager Dale Szczeblowski will continue on at the store indefinitely.

Sandberg is thankful that most of the owners will continue to work at the store for the time being. “If they had not been interested in staying on, we could not have considered doing this,” he said. “We’re learning the business from them.”

Mardell, who will be taking over Dawson’s role as manager and personnel director, has an extensive background in classroom education and literacy work. She is especially excited about working with the store’s children’s book section and its customers.

“If you look at who’s in the store, there are always a lot of parents with children,” said Sandberg. “The owners have done a great job of making it a place that kids are excited to go to. If our goal in life is to make kids care about books, they’ve done a really good job at making the store very, very friendly and a welcoming place.”

Sandberg spent most of his life actively involved in literature, both reading and studying books in college and for pleasure, and spent many years in the business world. His role with the bookstore has yet to be determined, but he has enjoyed his time in the store so far. “I’m just a book person,” he said.

For now, Sandberg and Mardell have no plans to change the store. “We’re still learning what we’re doing and what the store is about. Our view is that they’ve created something that works really well and is an incredible institution in this community. Our main job right now is to understand why the store is the way it is, and why it works the way it works,” said Sandberg.

The Porter Square community has been welcoming of the new owners, particularly because they are familiar faces. When the bookstore was put up for sale, frequent customers were nervous about a change in ownership, said Sandberg. Seeing that a pair of Cambridge residents of more than two decades was taking over, the relief was clear. “So far — very touchingly — the reaction has been ‘We’re so glad it’s you guys,’” said Sandberg.

Sandberg and Mardell are happy they were chosen as well. “Every time we browse a good indie bookstore, I pick up a book I had never heard of. Sometimes it’s the title, other times a recommendation of the staff,” said Mardell in a statement. “This is an experience that absolutely cannot be duplicated online. That’s why we believe in independent bookstores and are so excited to build on the excellent foundation at Porter Square Books.”

An October celebration will bring the community into the store for fun events and an opportunity to get to know the new owners.