Magic City Books to Open in Tulsa in Early 2017

When Magic City Books, a project of the Tulsa Literary Coalition, opens in early 2017, it will offer the city of Tulsa, Oklahoma, a carefully curated selection of literary fiction and narrative nonfiction along with lectures, panels, book discussions, poetry readings, and writing workshops.

Magic City will operate as a for-profit bookstore in support of the literary coalition, a not-for-profit organization started by former Tulsa City librarian Cindy Hulsey and Jeff Martin, the founder of Booksmart Tulsa, a literary organization that coordinates author events throughout the city.

Hulsey said that income from Magic City will enable the coalition to become self-sustaining in its mission to “celebrate the literary arts as a catalyst for reflection, exploration, and connection.”

“The idea for the Tulsa Literary Coalition came about after our one independent bookstore in town closed in 2013 or 2014, and we felt like we were seeing the literary community shrink,” said Martin. “We created it as a 501(c)3 based on the idea of promoting a literary community, and we thought that maybe the best vehicle to drive that mission would be a physical bookstore. Magic City Books will be a great hub for what we are doing through the coalition.”

Over the years, Martin said, Booksmart has brought close to 300 authors to different venues around town, including Stephen King, Salman Rushdie, Krista Tippett, Lisa See, Yann Martel, David Sedaris, and Elizabeth Gilbert. Now, Magic City Books will provide a brand-new physical venue for Booksmart’s events. Opening a bookstore, Martin said, had always been in the back of his mind, and he knew he would love to work with Hulsey, with whom he had teamed up many times for events at the library.

“Jeff and I looked at different models for for-profit bookstore/nonprofit organization hybrids; we did a lot of research, and ultimately this is how we decided to approach it. What we have now is a really nice sustainable model,” said Hulsey, who will serve as the general manager of Magic City Books and as executive director of the Tulsa Literary Coalition. Martin, who will be president of the coalition’s board of directors, will be heavily involved with but not directly employed by the bookstore, which will merge with Booksmart. 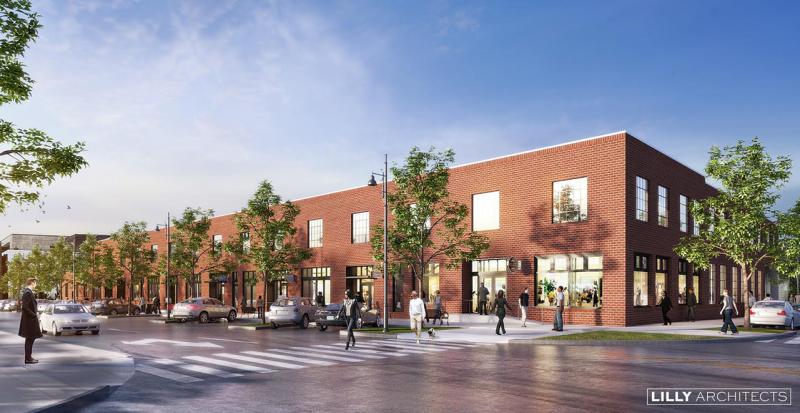 Architect's rendering of the future home of Magic City Books.

Magic City Books will serve as the anchor tenant in a 1920s-era building located at the corner of Archer Street and Detroit Avenue in the vibrant Brady Arts District, which is home to a variety of museums, restaurants, and an urban park. The building, which houses 10 other retail tenants, is currently undergoing extensive renovations by the George Kaiser Family Foundation, a charity that has been working on refurbishing Tulsa’s historic downtown district. The foundation originally approached Martin to see if he would be willing to open a bookstore in the space.

Magic City Books will be located in a 3,700-square-foot space, which will include a 1,800 square-foot sales floor;  a small café selling tea, coffee, sweet and savory treats, beer, and wine; and a meeting/event space, as well as the offices of the Tulsa Literary Coalition. Hulsey, who will not be running the day-to-day operations of the bookstore, plans to hire four managers and about six part-time employees working 20 hours per week.

“The store is a beautiful space with wooden floors and wood wainscoting and beautiful old wallpaper. It is just a really welcoming place,” said Hulsey, adding that the Kaiser Foundation will use the building’s second floor for an artists- and writers-in-residence program starting in January. Magic City will partner with the program for events. 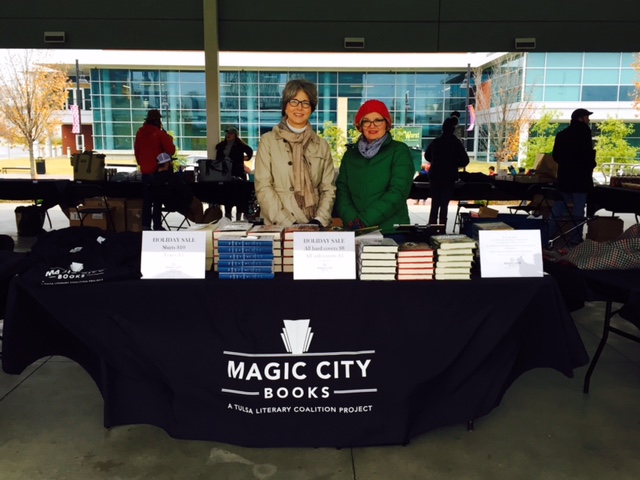 “When Jeff and I reached out to the authors, it was amazing how gracious they were. They are very excited about what we’re doing here and they have been really happy to lend their names to our efforts,” said Hulsey, who said the coalition is currently raising start-up funds for the bookstore through donations. To date, Magic City has raised $402,000, with an ultimate goal of $1 million, and in the six months since they have been selling books at author events, have grossed $55,000 in sales.

“We know the power of those big author names is palpable, and I think as we get closer to our monetary goal we may be doing some sort of online crowdsourcing campaign, which can be important in terms of increasing buy-in,” said Martin.

In the future, Hulsey said that Magic City will host many author events in-store and out in the community and will partner with nonprofit organizations, such as the Kaiser Foundation’s Women in Recovery, which helps women transition back into the mainstream after getting out of prison. Other programs at Magic City Books will include book discussion groups, writing workshops, poetry readings, lectures by local university professors, and panel discussions featuring experts on issues affecting Tulsa, including homelessness, racism, mental illness, and poverty. The store’s inventory will feature 30,000 new books for all ages, including adult literary fiction and narrative nonfiction.

“We really want a quality collection, and to create a store where you can find books you may not find anywhere else, although if you really want, you’ll find bestsellers, too,” Hulsey said. “We’ll also have a small, carefully curated children’s section; our buyer was a children’s librarian at a public school.”

Hulsey explained that the name Magic City Books was inspired by the city’s history as a boomtown in the 1920s, when it claimed the title of oil capital of the world.

“People were coming here and getting rich very quickly, and all these gorgeous art deco skyscrapers started popping up, and so some people, including Teddy Roosevelt, began referring to Tulsa as the Magic City or the Magic Empire,” said Hulsey. “We have a really rich history here in Tulsa. We kind of feel like the city is regaining a lot of notoriety and that we’re seeing the renaissance of our downtown, so we think this is a great time to be doing this,"