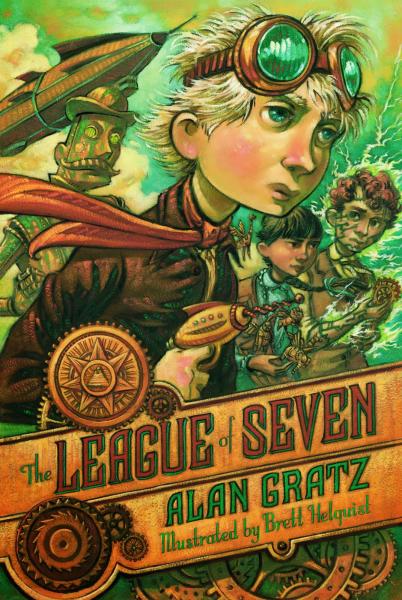 Alan Gratz, the author of eight books for young readers, is partnering with Malaprop’s Bookstore/Café in Asheville, North Carolina, in a promotion for his new middle-grade fantasy book, The League of Seven, the first in a trilogy.

Readers who preorder The League of Seven (Tor/Starscape) from Malaprop’s, Gratz’s hometown independent bookstore, will receive a specially printed, numbered chapbook featuring “Join, or Die,” a short story prequel to the trilogy. Gratz will also sign and personalize preordered copies of The League of Seven.

The chapbook will be available exclusively to customers preordering The League of Seven through Malaprop’s prior to the book’s on-sale date of August 19.

Malaprop’s general manager Linda Marie Barrett, who has known Gratz for some time, said that when he approached the store with the idea for the chapbook, she jumped at the chance to work with him again. “We’re honored to enjoy such a mutually supportive relationship with a favorite, very talented local author,” she explained. “And since we’ve talked with Alan, we are hearing from other authors who would like to do similar projects that offer Malaprop’s exclusive items to pair with preorders of new titles.”

In 2007, when his second novel, Something Rotten, was published, Gratz anticipated that it, like his first novel, would be carried by independents, chain bookstores, and Internet retailers; however, he learned that a Barnes & Noble buyer had decided not to purchase copies of the book for the chain’s stores. “My second book was saved by independent bookstores like Malaprop’s,” Gratz explained in a letter to the Asheville bookstore’s customers. “Independent booksellers made Something Rotten a success, and for that and everything they’ve done for the five books that followed, I’m eternally grateful.”

When promotional planning began for his eighth title, Gratz reached out to offer a little something extra to Malaprop’s customers. “When it came time to promote The League of Seven, I wanted to find a way to not just sell books, but to sell books through Malaprop’s,” he said. “I’d seen online retailers offer digital short stories that download free with the purchase of e-books, so I thought, why can’t Malaprop’s and I do the same thing with my good old-fashioned print book and a specially printed short story?”

The chapbook is being printed to look like it’s fresh off the printing presses of Benjamin Franklin, who appears as a main character in the prequel, and it is being hand-stitched by Alan, his wife, and a store friend, said Barrett. Co-op from Tor/Starscape is funding the chapbook’s development. Since the promotion began, The League of Seven has continued to appear on Malaprop’s in-store bestseller list.

This year, Malaprop’s has also had success pairing publisher-sponsored posters and other items with pre-orders of personalized and signed titles from Meagan Spooner and Stephanie Perkins. “These projects are exactly the kind of promotions we, indies, excel at offering to our customers,” said Barrett. “We can demonstrate excellent customer service in how we personally handle the orders and imagination in creating special offers. We also create deeper connections with our local authors and their fan bases near and far.”

Customers can preorder The League of Seven from Malaprop’s in-store, online, or by phone.

Set in an alternate 1870s America, The League of Seven features seven kids with superpowers battling the Mangleborn monsters. Gratz is also the author of Prisoner B-3087, Samurai Shortstop, Something Rotten, Something Wicked, The Brooklyn Nine, Fantasy Baseball, and Starfleet Academy: The Assassination Game.