Booksellers across the country have picked Margaret Rogerson’s Vespertine (Margaret K. McElderry Books) as the top pick for the November/December Kids’ Indie Next List. 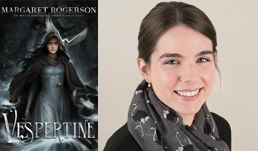 Vespertine follows Artemisia, a young girl training to be a Gray Sister — a nun who cleanses the bodies of the deceased so their souls can pass on. But the dead of Loraille won’t rest, and in the wake of a sinister attack on her convent, she must go against everything she’s been taught to believe to defend her world.

“Rogerson proves she is a master of fantasy with Vespertine, a dark, richly wrought tale about trust, betrayal, and truth set in a world where the dead do not stay dead,” said Chelsea Stringfield of Parnassus Books in Nashville, Tennessee. “Vespertine is my latest obsession.”

Margaret Rogerson: Vespertine has a more complicated origin than my previous two books. I’ve always wanted to write something involving ghosts. I came up with an early version of the setting years ago, but the characters weren’t working out, so I set it aside. Then, while I was trying to figure out what to write after Sorcery of Thorns, I was at the Renaissance festival and one of my friends took me to a psychic to have my cards read. The psychic told me that ghosts kept appearing in my cards and recommended that I write a book about ghosts. So, I did! I like to tell people that a psychic made me do it. In all honestly, without his encouragement, I’m not sure I would have pulled that old idea off the shelf.

BTW: How did you come up with Artemisia’s character?

MR: Other characters like the revenant leaped onto the page immediately, but it took me a few tries to get Artemisia right. While I knew from the outset that I wanted her to be a Joan of Arc type figure, her earlier iterations just weren’t working — she was too flat. Ultimately, the key to her character was putting more of myself into her, especially my massive problems with social anxiety. It was a lot of fun writing an ultra-powerful heroine who is regarded as a savior and a saint by the people, and has to rescue everyone, but really just wants to crawl under a rock and never talk to anybody ever again. This is an inner conflict that she wrestles with constantly, and it made her unlike any protagonist I’ve written before.

BTW: Being set in a convent, religion is obviously a focus. There's a moment that stood out to me near the beginning, when she received the relic of Saint Eugenia, which contains a fingerbone. Did you draw inspiration from any real-life religious objects?

MR: While writing, I spent a good amount of time looking up relics. I stumbled across one reliquary shaped like a hand (there are many of them — I wish I could remember the exact one) that made its way into the book. It was also fun thinking of ways that spiritual objects like censers and even pipe organs could be used to fight spirits. I might have gotten a little carried away with the organ.

BTW: Just like in Sorcery of Thorns, I was fascinated by the intricate worldbuilding in this book. What is your pre-writing/research process like?

MR: One of my favorite things about writing fantasy is that I can sneakily avoid doing a lot of research. But I did want the setting to feel grounded in a historical-feeling late medieval time period, so I made sure to read about what the characters would be wearing, eating, the medical terminology they would use, and so on. I even researched medieval latrines, which led me to the infamous Erfurt Latrine Disaster. I will spare you the details in this interview, but I highly recommend looking it up.

BTW: Once Artemisia is possessed by the revenant, she says she's, “split into two halves, with one trying to devour the other.” Can you talk about how you crafted the experience of possession?

MR: Early on in the story, readers learn that Artemisia was possessed by a spirit as a child, and it tried to use her body to hurt her family. The heartbreaking thing about her experience is that when someone is possessed by a spirit, they may not necessarily realize what’s going on, because they feel the invading spirit’s emotions as their own — so for a long time, Artemisia thought she was the one having terrible urges to hurt people. It was hugely traumatic for her. But as the story progresses, her experiences with first the ashgrim, and later the revenant, also allow her to uniquely empathize with spirits. I don’t want to spoil too much, but she develops an important bond with the revenant that wouldn’t have been possible without her past.

MR: If you’re a young person who is weird and different — who perhaps struggles with debilitating anxiety, depression, or are neurodiverse—you can be the hero of any story. You can find friends who love and cherish you without wanting you to change. And you should be kinder to yourself. That goes for older readers too, but it’s a message I would have found particularly helpful as a teen.

MR: This is a hard question to answer in the same way “Where does your inspiration come from?” is, because the answer is “Everything.”

I recently had an event at Joseph-Beth in Cincinnati, which is close to where I grew up and is the first bookstore I have memories of as a child. It’s a magical place. One thing I love about being there is that I almost have double vision when I walk around inside. I can still picture what the shelves looked like from the perspective of being two and a half feet tall, and now my books are on them.

While I was writing Vespertine, I had an encouraging letter from an indie bookseller pinned above my desk. I would take it down and read it whenever I was having a hard time. I just realized I phrased that in the past tense, but the letter is still there on my pin board. It means so much to me.

The truth is that I simply wouldn’t be who I am, or have a career as an author, without the support of indie bookstores and booksellers.