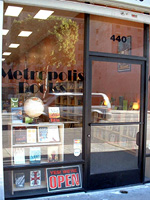 When Julie Swayze was exploring places in Southern California to open a bookstore, a friend suggested she check out the historic core of Los Angeles. In December 2006, Metropolis Books became a part of the revitalization of Skid Row. "What people wanted most was a bookstore," Swayze said. "I originally wanted to open in Pasadena or Altadena, but that really is a market that has plenty of bookstores. So I was able to find a space in the historic core, and we opened."

Metropolis Books joined more than a dozen other businesses that opened with the assistance of the Historic Downtown L.A. Retail Project, part of a local business assistance program. The project turned the neighborhood around. "I've been coming to this area for the past 10 years, and it's just amazing how the neighborhood has changed," Swayze said. "There was a time that I would not have even walked down this part of Main Street or even considered opening a store."

Now she described the neighborhood as a mix of loft dwellers, artists, city, state and federal employees, and what she calls "urban explorers, people that come for the day to shop and explore downtown." Metropolis Books also counts a large number of USC students among its customers.

Swayze, who owns the bookstore with her husband, Steven Bowie, came to bookselling with a business degree and a background in retail management and buying. "I also love books, and I write, although I currently don't have as much time to write," she explained. "After running stores for so many years, I wanted to open my own store and be my own boss. It seemed like a natural choice to pick bookselling."

The 900-square-foot Metropolis Books stocks 4,500 titles and specializes in books about historic Los Angeles and architecture. Inventory also includes classics and current fiction and nonfiction bestsellers. The store usually holds two to three book signings a month, including local and non-local authors, and participates in Downtown L.A.'s monthly Art Walk, where Metropolis usually has a signing, poetry reading, or an art-related event. 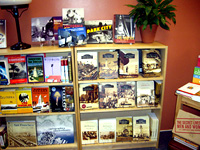 After attending the "Digital Revolution 2.0" session at the Winter Institute, Swayze expanded Metropolis Books' web presence to include several book-related social networking pages. "I wasn't really sure if MySpace was something we should do, but at one of my ABA training sessions [the panel] suggested it. I'm really glad I set it up. We have received many invites to become friends from publishers, and authors, and people who are fans of independent bookstores. I also set up a Linkedin account, as well as [accounts with] Goodreads, Facebook, and our Downtown Blog."

Swayze, who will continue her bookselling education at ABA's Thursday's Day of Education at BEA, noted that Metropolis Books is less than two miles from the convention center -- about a 20-minute walk -- and she invited booksellers to drop by.

"My plans for the next few years are to continue to grow the business, have a presence at the L.A. Times book festival, and also the West Hollywood festival," she said. "I'd also like to continue to hold events with authors from different genres, and pursue more bestselling authors as well."

Meanwhile Swayze is basking in the appreciation of a neighborhood that's seen a sea change and that specifically called for a bookstore to be part of its revitalization. "People definitely appreciate that we're here," she said. "The last independent bookstore closed about 20 years ago." --Karen Schechner