In the following excerpt from the updated trade paperback edition of My Bookstore: Writers Celebrate Their Favorite Places to Browse, Read, and Shop (Black Dog and Leventhal, April 11), mystery writer Carolyn Hart pays tribute to her hometown bookstore, Full Circle Bookstore in Oklahoma City. Watch for more excerpts from My Bookstore in the coming weeks.

As an author I’ve signed books at Full Circle, my hometown independent bookstore, enjoyed friendship and kindness, and found wonderful books that have touched me deeply.

A bit about Oklahoma’s largest independent bookstore: Full Circle is a starting place and a destination point for book lovers, offering 60,000 titles in a store that rambles through several rooms furnished with tall oak bookshelves, end caps, book-strewn tables, and a children’s enclave sure to make a Grinch smile.

Flames dance in two fireplaces on chilly days. Patrons relax in a coffee bar, a café, and an area for signings, musical events, and book clubs. Unique to Full Circle is Pearl, a gleaming white, pearl-encrusted, almost-full-size statue of a bison. Pearl was one of a hundred statues created several years ago to celebrate Oklahoma’s Plains days, when buffalos thundered in massive herds, raising clouds of dust visible for miles. Of all the bison statues, she is the only lady. The staff feel that she has an attitude, she is one of a kind, and she represents the store’s commitment to Oklahoma, its history and authors.

A bibliophile’s delight, Full Circle is the creative accomplishment of Jim Tolbert, a successful businessman and civic leader. Jim has succeeded at everything he has done — business, philanthropy, support of the arts — and as a visionary for Oklahoma City, he has contributed to its transformation from a sprawling cow town to a metropolis. Jim has a professorial air that reflects his focus on the life of the mind. He is insatiably curious. He is enormously well-read. He has a passion for knowledge. It is Oklahoma City’s great good fortune that his idea of happiness is to spend time in the very best bookstore he could create, a bookstore with a heart, a bookstore where everyone is a reader, a bookstore that constantly surprises, a nurturing oasis for readers.

What has Full Circle meant to me?

As an author happily signing a new book, I have always been treated with kindness and respect, whether a few people showed up or we drew a cheerful crowd. If we had only a few in attendance, I visited with them on a personal level, perhaps to talk about the inspiration for a particular book (I love Blithe Spirit and the Topper books and wanted to write about an energetic, fun-loving ghost, so the late Bailey Ruth Raeburn made her debut in Ghost at Work), or to explain why a series was ended (I enjoyed writing about retired newspaperwoman Henrietta O’Dwyer Collins but the publisher wanted younger protagonists), or to suggest wonderful mystery writers, from both the past and present, that those readers might have missed (to have a true sense of thoughts and feelings in the 1930s, read Eric Ambler’s suspense novels, and for a hilarious change of pace today, dip into the Feng Shui Detective novels by Nury Vittachi). 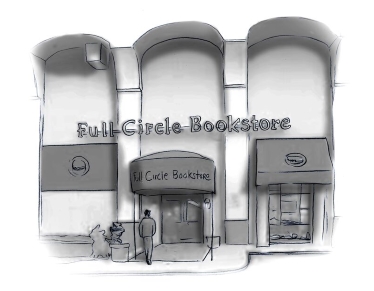 With a larger audience, the presentations were more formal. I remember in particular a luncheon a good many years ago when I spoke to wonderfully receptive readers about the importance of mysteries in popular fiction. Mysteries are not written simply to entertain or to provide a puzzle. Those are two important facets of a mystery, but the prime function of the mystery is to reaffirm a reader’s faith in goodness. Mysteries confront the age-old sins of jealousy, greed, anger, selfishness, cruelty, and oppression. The protagonist discovers what went wrong in particular lives and brings justice to the guilty and relief for the innocent. We live in a world beset by evil. Mysteries offer both writers and readers a means of celebrating goodness, justice, and decency. Readers read mysteries because they want to live in a just world. Writers write mysteries because they want to live in a just world. It is this focus on goodness that distinguishes mysteries from all other fiction. As I’ve told many readers at Full Circle, if I have to be marooned on a desert island, I want to have mystery readers and writers as my fellow castaways. They will follow the rules and one of them will be smart enough to get us off the island.

So many happy signings, so many wonderful readers…

One of the most magical moments of my entire writing life occurred at Full Circle on a beautiful January Sunday in 2014. The previous fall, Mystery Writers of America had called to tell me that I would receive the Grand Master Award at the annual Edgar dinner in May. MWA is the organization of American mystery writers. At the Edgar dinner, statuettes of the founding father of mysteries, Edgar Allan Poe, are presented for outstanding books from the previous year and to the Grand Master in recognition of a lifetime of work. In 2014 Robert Crais and I were named Grand Masters.

Perhaps to Full Circle that afternoon was simply another of the elegant events they put on for so many authors because Full Circle always supports Oklahoma authors. To me, it was a circle of brightness in a very happy year.

But there is yet one more grace note in my life because of Full Circle. When I go to Full Circle, I must often appear to be an aimless wanderer, but that is by design because I expect serendipity. I will find a book of which I was unaware, become acquainted with an author I will treasure, add light and happiness to my life if I just look. Books are tucked in nooks and crannies. I always check the collection of books about cats and dogs… Cat and dog owners will understand. I value our brown tabbies, count them as my friends and companions. I know there is affection and trust and mutual caring, and I delight in stories about writers and their cats. In this small display I discovered British author Doreen Tovey, who describes with amazement and sometimes stupefaction the antics of her Siamese cats.

Another day I found Eats, Shoots & Leaves by Lynne Truss and laughed on every page. My Life With the Saints by James Martin, SJ, inspired me. Some years ago I discovered Those Wonderful Women in Their Flying Machines: The Unknown Heroines of World War II by Sally Van Wagenen Keil, an absorbing and dramatic history of the young women who became WASPs and whose story every American should know.

I’ve always found women aviators fascinating. I admire their bravery and their accomplishments. It was at Full Circle that I found Susan Wels’s superb Amelia Earhart: The Thrill of It.

Every time I come to Full Circle, I wander from room to room, from bookcase to table to small special displays. I am never disappointed. And one day I found a book that meant the world to me, We Band of Angels: The Untold Story of the American Women Trapped on Bataan by Elizabeth M. Norman.

And therein lies a tale. In the late 1970s, I was stymied as a mystery and suspense author. I’d written seven books in seven years and sold none of them at that point (though all have since been published). I had yet to write any of my traditional mystery series. Several of my books were suspense novels with a World War II background. I was a child during the war and the war dominated our lives: the huge headlines, the crackling static of radio broadcasts, friends and family in the service, ration books. Later as a teenager and young adult, I read widely about the war, especially nonfiction accounts.

I learned much about the Japanese invasion of the Philippines, the eventual fall of Manila and Bataan and the withdrawal of American personnel, including nurses, to the island of Corregidor. I read everything available about the nurses, their bravery, the harrowing days and nights during the bombing of Corregidor. I did a great deal of research, hoping to write a nonfiction book about the nurses, but I discovered that their papers were sealed and not available to the public at that time.

I took all of that research and used it to write Brave Hearts, a story of ordinary people caught up in the terror of war. It was published in 1987. As I wrote in the preface to its reprinting in 2013 by Seventh Street Books:

Brave Hearts is a true picture of the fate of American forces and civilians in the Philippines after the Japanese invasion. The fighting was brutal, the treatment of civilians capricious and often deadly. Though the characters in the book are fictional, Brave Hearts offers a realistic and often heartbreaking picture of what happened in the Philippines. My hope is that readers who know little of that past will be touched by the heroism of “the battling bastards of Bataan,” the gallant nurses on Corregidor, and the American civilians who plunged into jungles and scaled mountains to seek freedom.

I was always grateful for the research that made Brave Hearts possible, but it was hugely satisfying to finally discover everything about those courageous nurses in Elizabeth M. Norman’s superb history.

Full Circle’s impact on me has been profound and I am only one of thousands who have come to the store. Who can gauge what difference Full Circle has made in the lives of so many readers?

Jim Tolbert’s accomplishments are many, but I feel sure that he has a special place in his heart for Full Circle and for all the books and all the readers. To me, Jim and Full Circle are a superb expression of a Bible verse I treasure:

Thank you, Jim, and God bless.

CAROLYN HART is the author of 56 novels. Her most recent titles are Ghost to the Rescue, Don’t Go Home, and High Stakes, a suspense novel.

From the book MY BOOKSTORE: WRITERS CELEBRATE THEIR FAVORITE PLACES TO BROWSE, READ AND SHOP, edited by Ron Rice and Booksellers Across North America. Copyright 2017 by Hachette Book Group, Inc. Reprinted by Permission of Black Dog & Leventhal,  an imprint of Hachette Books, New York, NY. All rights reserved.