In the following excerpt from the updated trade paperback edition of My Bookstore: Writers Celebrate Their Favorite Places to Browse, Read, and Shop (Black Dog and Leventhal, April 11), bestselling author John Hart pays tribute to Rainy Day Books in Kansas City, Kansas, and store owner Vivien Jennings. Watch for another excerpt from My Bookstore next week.

A Letter to Vivien

Ten years ago, who could have known that you would change my life? I didn’t know your name. You’d only recently heard mine. We lived half a country apart, yet this miracle occurred: you answered a phone call, and made a dream come true.

The year was 2006, and I was a week from the publication of The King of Lies, my first novel. I knew nothing of publishing or bookselling or promotion. I was an ex-attorney, a want-to-be best-selling author, a father of young children. My wife believed in me, as did my editor and my publisher. To the rest of the world I was less than a great unknown. How many books are published every year? How many actually find an audience? I’m not sure of the percentages, but even in 2006 I understood that they were grim. Thousands aspire. Many thousands. Yet only a handful of writers find the perfect balance of timing and luck and that elusive book that speaks to publishers and booksellers and then — and only then — to readers. No one knows enough to guarantee an audience for any writer who is new to the business. Even the finest publishers are casting bones and reading tea leaves. The fossil record is easy enough to interpret: the big advances, the failed debuts. The landscape is littered with such tales. 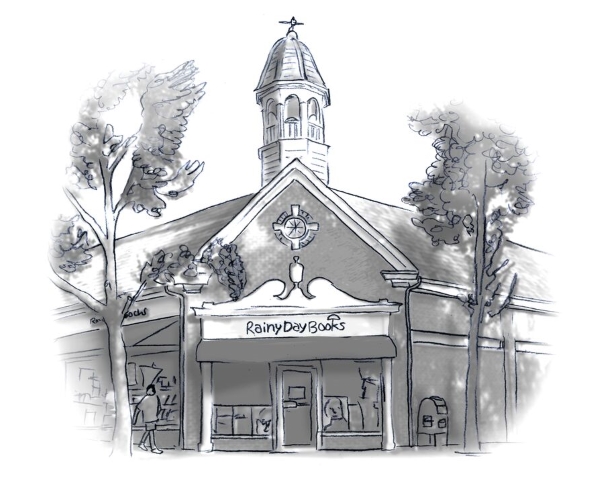 My story began humbly. In graduate school, I wrote two failed novels. When the third caught an editor’s eye, the advance was equally humble. I remember the day my agent tried to move above the $7,500 number and was told — and I quote — “Everyone recognizes the value of a five-figure advance.” It seems remarkable now, that such small beginnings can lead to such great things.

But I get ahead of myself.

The advance was small, yet the publishers had faith. They planned their campaign: the print run, the tour, the media. Advance readers’ editions were part of the plan and this, Dear Vivien, is where our paths first crossed. You were one of the early readers, perhaps the first. Why you chose The King of Lies from the vast selection of advance copies sent to the care of Vivien Jennings at Rainy Day Books in Kansas City is beyond me, but select it you did. You lifted it up, and you read it. Most importantly, you liked it.

Which brings us to the day you changed my life.

Unbeknownst to me, the Wall Street Journal was planning a two-page article about the big books of summer. As part of his due diligence, the reporter reached out to those persons he suspected might have their thumbs on the pulse of the industry. Clearly, he recognized that your opinion mattered to many, that you were a mover and a doer and a voice. I would love to have heard the conversation. All I know for certain is that he asked what authors excited you, and you asked if he’d heard my name. Two questions, consecutively posed and the conception, I believe, of the career that has sustained me. He read the book. He loved it. When the article appeared, eight novels were suggested as must-reads for the summer. Mine was the only debut.

The article appeared on a Friday.

Four days later The King of Lies hit the shelves.

Was it the biggest seller of the summer? No. Not even close. But it debuted on the New York Times best sellers list and laid the foundation for more books on that very important piece of publishing real estate. That article was not the only media attention my novel received, but it was the first and timeliest, and it set the tone. I’ve now written five best sellers, and hope to play the game for a long time to come. Would that have happened without you, Vivien? I really don’t know. Only the past is certain, and you played such a large role in mine. We’ve met over the years. I’ve signed at your store, met your wonderful husband, and joined you both for dinner. When I mention our friendship to important people in publishing, I invariably receive the same response. “Vivien Jennings,” I hear. “What a bookseller! What a fine person!” I can attest to both things, and to the power a single person has to change the course of another’s life. I love what I do. It’s meaningful. It feeds my children.

JOHN HART is the author of Redemption Road and of four New York Times bestsellers: The King of Lies, Down River, The Last Child, and Iron House. The only author in history to win the Best Novel Edgar Award for consecutive novels, Hart has also won the Barry Award, the Southern Independent Booksellers Award for Fiction, the Ian Fleming Steel Dagger Award, and the North Carolina Award for Literature. His novels have been translated into 30 languages and can be found in over 70 countries. A former defense attorney and stockbroker, Hart spends his time in North Carolina and Virginia, where he writes full-time.

From the book MY BOOKSTORE: WRITERS CELEBRATE THEIR FAVORITE PLACES TO BROWSE, READ, AND SHOP, edited by Ron Rice and Booksellers Across North America. Copyright 2017 by Hachette Book Group, Inc. Reprinted by permission of Black Dog & Leventhal, an imprint of Hachette Books, New York, NY. All rights reserved.