Indie booksellers across the country have chosen Natasha Ngan’s Girls of Paper and Fire (Jimmy Patterson) as the top pick for the Winter 2018–2019 Kids’ Indie Next List.

Book one of Ngan’s young adult fantasy trilogy follows Lei, a member of the Paper caste, the lowest class in Ikhara. Years after the Demon King’s royal guards raid Lei’s village and capture her mother, they come again, this time to take Lei. She is brought back to the Hidden Palace to serve alongside eight others as consorts to the king called Paper Girls. But Lei refuses to live according to the rules of the Hidden Palace; instead, she falls in love and decides to fight back against the cruelty she and the other Paper Girls are forced to endure.

“Girls of Paper and Fire, like its dauntless heroine, is destined for greatness,” said 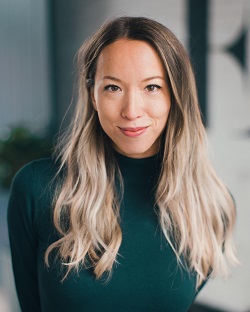 Kiersten Acker of Brookline Booksmith in Brookline, Massachusetts. “YA fantasy has waited too long for a book like this. In a lush fantasy world where opulence hides cruelty, low-caste human girls are stolen from their homes to become concubines of the powerful Demon King. These Paper Girls are told they have no future outside of the Hidden Palace, but one girl, Lei, is determined to escape. Lei is a humble but fierce heroine whose friendship with another girl in the palace soon turns to something more. Ngan brings every facet of this world and its characters to life with her evocative, emotional prose and a love story that defies the odds.”

Here, Bookselling This Week discusses the world of Ikhara with Ngan.

Bookselling This Week: Girls of Paper and Fire features the intricately built world of Ikhara. You’ve mentioned in other interviews that you spent part of your childhood in Malaysia. How have your experiences informed the world you’ve created?

Natasha Ngan: The world of Ikhara is so fully the world of my particular cultural experience and identity as a mixed-race Chinese/English girl growing up between the U.K. and Malaysia, from the small details — the shrines in each household, for example, were inspired by the ancestral shrines in my family’s houses in Malaysia, and all the foods are things I’ve eaten many, many times! — to the larger elements. The system of the Paper Girls has its roots in the ancient Chinese practice of concubines (though the Chinese were certainly not alone in this). The cultural mélange of Ikhara was influenced by Malaysia’s multicultural society, as well as the unique experience of diaspora children like me, who feel very much a part of many places at once, and yet without a single easy ethnic identity to categorize ourselves.

BTW: The Paper Girls are eight girls chosen annually to be consorts of the Demon King. How did you come up with the idea for them and their place in the Women’s Court?

NN: As with all my book ideas, it was the one-line hook that arrived first — which was exactly as you just described! Once that was in my head, other ideas started to come to me organically, and I built the world from there. For the Paper Girls, I did do some research into ancient China and the practice of imperial concubines, as well as the place of women in the Forbidden City (which the Hidden Palace of the Demon King is a not-so-subtle reference to!). Even without this research, it wasn’t difficult to imagine how the lives of the Paper Girls might be within such a patriarchal society — sadly. I only had to look to our present reality for that.

BTW: Sexual politics and sexual abuse within the Demon King’s palace play an important role in this story. Can you tell me more about why you incorporated those elements?

NN: These issues are incredibly important to me, and always have been — though I didn’t intend Girls to be released at such a timely moment. I don’t think I or my publishers foresaw just how relevant it would be. I also didn’t set out with the intention of writing a book about sexual politics. But, as usual with writing, the topics I’m most passionate about influenced my work.

It was probably about halfway through Girls that I realized, oh, that’s what this story is all about. As a sexual abuse survivor myself, I wanted to create a narrative that was empowering for survivors. That showed readers — especially young girls — that they can take ownership over their own bodies, and their futures. That there are many different ways to react to sexual violence and abusive relationships, and you are not wrong or broken because you react differently to how others do, or the way you think you should be reacting. And I love that Lei’s path to empowerment is aided by her love for another woman. I am a queer Asian woman, and I have never felt represented in books, especially in the genre I love the most. It’s incredibly humbling that I can now do that for other girls like me.

BTW: At the center of this book is Lei, a human in a world run by anthropomorphized and otherwise magical beings, who has removed herself as much as possible from the politics of the Hidden Palace until she is brought there against her will. How did you come up with the idea for her character?

NN: Lei’s character came to me through her voice. When starting a draft, I have to find the right way in or I can’t continue. It’s incredibly frustrating. For a long time with Girls, I was stuck. Nothing felt right. I tried writing in third person, as well as experimenting with different perspectives. I was looking for a young girl who was at once naïve and mature; who was vulnerable and didn’t really know yet her own strength but would still be strong enough to carry the story. When Lei’s voice came to me during a yoga class — she spoke the first line of the book exactly as it is! — I knew I’d found what I was looking for. From there, her character developed organically through the writing.

BTW: The book also explores the cultural and religious traditions of Ikhara, such as the Birth-blessing, which is key to Lei’s character, as well as myth and folklore. What was your research process for these elements of the story?

NN: Most of the historical and cultural elements of Ikhara have real-world inspirations, even if they are just touchstone references. As I said earlier, I wanted to create a world that felt at once familiar but also not too directly linked to any one place. A lot of these elements came straight from my own experiences — of going to the temple in Malaysia with my mum to light josticks for my ancestors, for example, or how, like most Chinese children, I’ve grown up knowing my culture’s love of the number eight, and how deep that superstition permeates.

When it came to myth and folklore, I had to do a bit more research to understand the history of the stories I was exposed to growing up. Again, I used these as a point of inspiration rather than staying too close to each story. The Demon King’s bull form is a nod to a character in Journey to the West, one of Chinese literature’s classics, and some of the other demon forms were inspired by Malaysian fairy tales.

BTW: What would you want readers to take away from this story?

NN: That there is always hope. Despite its difficult themes, I really want Girls to be an empowering, hopeful read. The world is a dark place and, unfortunately, we can’t protect young people from experiencing horrors in their lives. If anything, it feels as though we’re failing worse and worse on that front every day. So, if Lei’s struggles and arduous journey to self-empowerment can be inspiring for readers and remind them that they, too, have power within — more power than they might be aware of — then that means the world to me.

BTW: Can you tell me a little bit about what you’re working on next?

NN: I’ve just finished the first draft of the sequel to Girls! It’s going to be a trilogy, and so this is the difficult middle book. Drafting was incredibly painful — definitely the hardest of my books so far. Now — revisions! I’m super happy with the direction the story is taking, and I think it could shape up to be a great follow-up. It’s a lot more action-packed than Girls, but with just as much heart and focus on character relationships. I can’t wait for readers to see where Lei’s journey takes her next!