Independent booksellers across the country have chosen The Memoirs of Stockholm Sven by Nathaniel Ian Miller (Little, Brown and Company) as their top pick for the November 2021 Indie Next List. 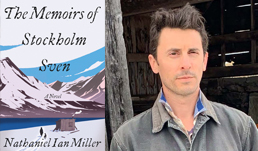 “Wow, what a book,” said Jessica Williams-Sullivan of Politics and Prose Bookstore in Washington, D.C. “The world and the characters grow together. In a bleak, unforgiving landscape, Sven is able to discover found family and grow as a person, while offering hard-won insights about human nature that’ll leave you breathless.”

Here, Miller and BTW talk about crafting a fictional memoir.

Bookselling This Week: The story is inspired by a real Spitsbergian hunter — why did you choose to write a fictional memoir about him? What was your experience writing in this genre?

Nathaniel Ian Miller: As part of The Arctic Circle, an artist residency aboard a traditionally-rigged ship in Svalbard, I got to visit Sven’s actual hut in Bruceneset, a remote spot on the northern rim of the archipelago. It was a wreck (sitting there since the 1920s), but there were still ancient matchboxes, a can of honey, a crumbling woodstove. I'd been planning to write about the horrible old glory days of polar exploration, but when I stepped inside Raudfjordhytta and started musing about Sven’s possible life, his isolation, and his mental state, I knew I had my subject.

However, as Sven’s character evolved, he surprised me. (That’s the beauty of writing fiction. We know almost nothing about the real Stockholm Sven, so 99.8 percent of the story is made up.) I thought he would spend the vast majority of his time alone. It was only as things progressed that I realized this was a story about people. I’ve written on the subject of extreme isolation before—in this case, clearly, there was much more to it.

Sven will always see himself as the least interesting person in the room, and in some ways he is. He’s not a cipher, but he is someone whose life is given meaning less by his choices than by the people (and dogs!) who choose to surround him.

BTW: Near the beginning of the book, Sven and his newfound mentor Tapio talk about finding an experience in nature that “quiets the mind.” What does quieting the mind mean to you? Have you had such an experience?

NM: Yes, I have experienced this, albeit briefly. I’ve been chasing the dragon ever since. Nothing like the metamorphosis that Sven goes through, of course — the turning to stone; experiencing time geologically — but something of that nature. Both times, for me, were in Wyoming — once in the Gros Ventre Wilderness, where I worked a summer on a guest ranch, and again several years later, working on another ranch in Centennial Valley (the other end of the state, diagonally), the same area where Annie Proulx lived for a while and which she so beautifully, painfully brought to life in Close Range.

I grew up in rural Connecticut and spent most of my spare time wandering around the woods, but the emptier parts of the Rocky Mountain West got me farther from the noise of civilization than I’d ever been, and that distance worked wonders on me.

As someone like Sven, prone to internal chatter and nagging head-noise, it was a relief beyond words — literally — to discover that things were growing quiet inside. Not dull, and certainly not numb — just quiet. One of the main reasons I work on the land, as a cattle farmer, is so I can catch those moments as they flit by. They don’t happen in the tractor, though.

BTW: Sven’s story takes off when he’s in his mid-thirties, but it feels so much like a coming-of-age narrative to me. Did you think of it that way as you were writing?

NM: For sure, in the sense that many of us — me included — spend our entire lives coming-of-age. We never quite arrive, or figure it out, and neither does Sven. I often find myself marveling at the people I know, like my folks, who for any number of reasons (financial necessity, confidence in one’s interests or skills, a desire to avoid the draft, etc.) go straight from school to a career, and never deviate. One vocation is all they’ve ever known.

I, on the other hand, have held (often briefly) 27 different jobs in 13 different places, and am still figuring that part out. But coming of age is more than employment, of course — it’s love and loss and family and understanding yourself better. A life’s work. Maybe I am more like a hobbit and won’t reach maturity until 50. Maybe I hope I never will.

BTW: What was your research process like for this story overall?

NM: Beyond the Arctic residency itself, which provided ample material about the look, feel, and smell of those regions, and beyond my two loaded shelves of polar-themed books, I just dived into rabbit holes here and there as they appeared in front of me. The Finnish Civil War, for example, was something I knew almost nothing about, and the more I read, the more I wondered at how my ignorance (and geographical self-centeredness) could be so extensive.

The whole section about Craiglockhart, Sassoon and Owen was a kind of ode to my mother, who introduced me to Pat Barker’s amazing book, Regeneration, when I was probably far too young for it, and instilled a great love of WWI poetry in me. The chance for Sven to overlap, however tangentially, with those poets was too tempting to pass up.

I visited Iceland about six months after finishing the book, alas. Otherwise it might’ve been represented more thoroughly. (It may be worth noting that while Sven does not have a high opinion of the place, I am in love with it.) For another project!

NM: This is grandiose, but my fondest wish is that readers will come away from it feeling like the characters are people they know well. Some they might miss, others are perhaps annoying, but if I did my job right, Sven and Co. will continue to exist vividly in the mind as close personal friends (or enemies). That’s how I feel about my favorites.

BTW: What role do independent bookstores play in your life?

I tend not to be the type of customer who asks for recommendations, but staff picks are a reliable place to find inspiration. Traditionally I’ll head for the fiction, starting at Mc (McMurtry and McCarthy) and take it from there. Unless I’m shopping for my son, of course, in which case it’s L (“the great god Kathryn Lasky,” as he calls her).

BTW: Anything to add?

NM: Just that this Indie Next designation, proceeded by a veritable flood of love (in the form of reviews and nominations) from independent booksellers across the country has been one of the joys of my life. Regardless of how the book does out in the world, this staggering encouragement will sustain me for years and years.

I told my wife, who was the one to unravel the Byzantine complexities of the Edelweiss platform so we could read said reviews, “Maybe I’ve found my audience, and it’s independent booksellers!”

If the latter ends up being the case, I owe it to the former.