New Owners, New Name for Once Upon a Tome

Alyssa and Jacob Holster, the new owners of Once Upon a Tome bookstore in Eden, North Carolina, are adding a coffee bar and changing the store’s name to Uprising Coffee & Books. 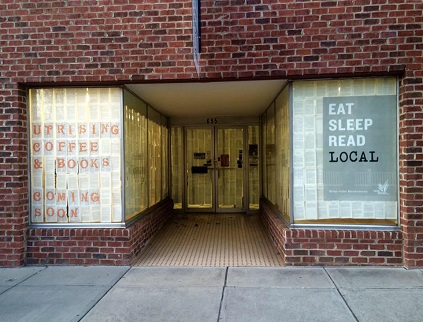 The 1,200-square-foot store’s new incarnation, opening in a few weeks, will feature a monthly crop of bestsellers and will eventually incorporate titles from small independent presses and self-published authors, according to Alyssa Holster. The store will also offer a large collection of used books — customers who donate used titles will receive store credit — and a sizeable children’s book section.

“I’ve had people telling me that there is no other place to get kids’ books in the area and they literally have to drive for hours to find them,” Holster said.

Uprising’s coffee bar, located near the checkout area, will serve pour-over coffee that is manually brewed and distributed through a partnership with a coffee roaster in Carrboro, North Carolina, with grower connections in Guatemala and Honduras. Once Upon a Tome’s former owner, Emily Stearns, who opened the business in December 2014, had previously provided $1 coffee via Keurig, but the new coffee system will use a high quality grinder and Chemex brewers.

“We will have delivery of roasted coffee each week and it will not just be a high quality product but it will also be ethically sourced. I think everybody can feel good about that,” said Holster, who added that she is considering serving baked goods later on, but right now just hopes that the margins on coffee will complement those on books. 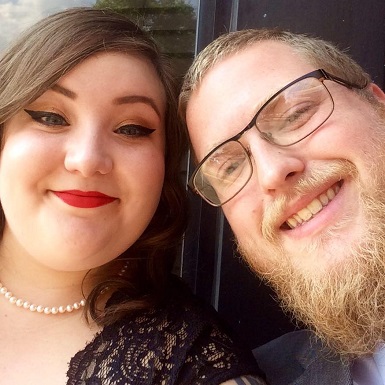 The Holsters chose “Uprising” for the name of their new venture — based on the expression “Rise and shine!” — to reflect that coffee is now a major part of their business. “Uprising” also comes from Alyssa Holster’s study of Eden’s history: the city of 15,000 people in the state’s Rockingham County was once home to American revolutionary Patrick Henry, author of the famous “Give me liberty or give me death” speech.

Stearns, who is moving away from the area to be closer to loved ones, studied with the Holsters at Western Carolina University. She said the store transition came about when her boyfriend, Will, ran into Jacob Holster in November at a music education conference and mentioned in passing that she was considering selling the bookstore.

Stearns said she was very worried that her customers would be turned off by such a quick transition, but everyone has been wonderfully supportive. “Alyssa is going to do a great job at continuing and building on the foundation I was lucky to create. She’s shared some of her ideas with me,” said Stearns, “and I have every confidence that Uprising Coffee & Books will become a true staple in Eden.”

Holster said she and her husband are doing some small renovations to the space, including putting down laminated flooring. They have also painted three walls a dark gray, and that will be complemented by one big bright wall of geometric color blocking. The front of the store will be divided into seating for coffee drinkers and a kids’ play area, said Holster, and will feature strings of hanging lights to make the space feel more welcoming.

“We’re trying to put up some background colors since it was very white in here, and we’re also replacing the fluorescent lighting and getting rid of some green and white tiles,” she said.

In addition to putting up their own money to fund the store, the couple also got a $25,000 loan from the North Carolina Rural Economic Development Center, which they achieved by submitting a 40-page business plan. Now that the space is almost ready, Holster said she hopes to open Uprising’s doors before the end of the month.

“We’re not exactly sure if we are going to make our open date of April 1. It’s hard to tell, not having a big crew of people, but we’ll definitely be open within two or three weeks.” 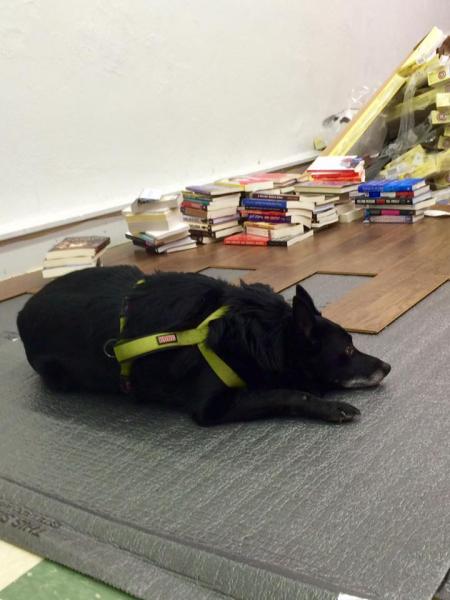 The Holsters' dog, Tucker, hangs out among the books soon to grace the shelves of Uprising Coffee & Books.

“We really want the store to become a community center for students to come and hang out,” added Holster, who noted the area is home to a community college and within commuting distance of the University of North Carolina. “We want to make it a good place to study because I know how important that was for me as a student to have a place like that to go.”

In the future, Holster said she hopes to host story times, book clubs, and author signings and readings and to continue the store’s partnership with One County One Book, which held its first kick-off meeting there. In May, the Holsters also hope to provide a sober-up reading tent at the local beer festival.

“Emily was also on the board for the Friends of the Public Library, so we will also be working with them as much as possible,” said Holster.