New Zealanders Get a Glimpse of American Bookselling

New Zealand booksellers Courtney Smith and Rochelle Handley followed this year’s Winter Institute with a week working at an American bookstore. The booksellers’ trip to the U.S. was sponsored by Kobo and Booksellers NZ.

“The event itself is quite overwhelming,” said Smith, the buyer for Unity Books Wellington. “It was difficult to choose between sessions as they were all so relevant, but the most interesting talk by far was on climate change and retail. The speakers talked about ways to bring costs down in a business while simultaneously reducing waste and energy use. I plan to boost our climate change books as soon as I get back.”

“I haven’t been around so many passionate, intelligent, and interesting people before,” added Smith, who, with Handley, also took part in the bookstore and publisher tours prior to the institute. “U.S. booksellers are a hardy bunch, and it was amazing to hear about their community involvement — offering book clubs, free meeting room spaces, and literary workshops.” 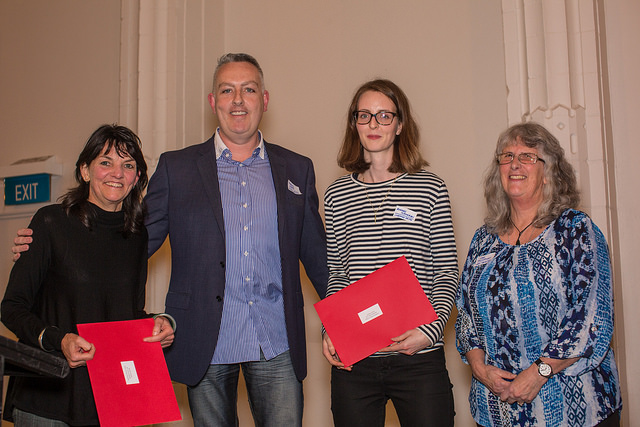 “There are some more technologically advanced stores in the U.S., too,” she said.

Handley, a bookseller at Paige’s Book Gallery in Whanganui, told Bookselling This Week that Winter Institute was a wonderful experience that left her with a notebook filled with new ideas from fellow booksellers, all of whom were warm, sharing, and wonderful.

“Stand-out favorites at Winter Institute included the breakfast session with Roxane Gay and the Bookseller Discussion Groups, which were a great way to hear various perspectives on the U.S. bookselling trade,” she said. “The Author Reception was gorgeous — it felt like such a treat to not only get to chat with the authors but also to walk away with their books.”

“It was such a great bunch of authors, and I had read most of their books,” said Handley. “It was just nice how they bounced so well off each other.”

Once at home, Handley said she plans to consider implementing some of the concepts gained from the education sessions she attended, including “Integrating Used Books Into Your Inventory.”

Before they returned home, both New Zealanders worked at an independent bookstore in California for a week. Steve Salardino, a manager at Skylight Books in Los Angeles, said it was amazing how well Smith fit in.

“Whoever paired her up with us did a bang-up, A+ job. I found it very interesting to hear about her store and experiences as a bookseller in New Zealand. I also enjoyed trying to see our store through her eyes — it was a great exercise,” he said.

Smith was paired with different staffers throughout the week — Skylight’s buyer, the events team, and the receiving/returns manager, among others, according to general manager Mary Williams.

“We loved having the opportunity to exchange notes on all the nitty-gritty bookstore practices with someone from such a great indie,” said Williams. “Courtney gave us lots of interesting insights into the New Zealand bookstore scene.”

Smith said the staff at Skylight was extremely generous with their time and more than happy to share their knowledge; Williams even took her on a tour of other local bookstores to get a sense of how each was representative of their particular neighborhood.

“Having the opportunity to chat with all the other lovely, intelligent, funny staff and seeing all the differences and similarities between our workplaces was so helpful,” said Smith. “I also enjoyed sitting in on a rep meeting with their buyer Charles Hauther and learning about their ordering methods and resources. Charles also introduced me to Edelweiss, which exists in Australasia” but isn’t as widespread as in the U.S.

Smith also got the chance to attend a Skylight event with the author/musician John Darnielle, where she saw how Skylight was able to make their space work for events.

“Being in a bigger pool for events definitely makes things harder for U.S. booksellers, but the number of authors touring is a bonus,” said Smith. "In New Zealand, it’s much harder to get international authors over.”

Handley, who worked at Green Apple Books in San Francisco’s Richmond neighborhood for the week, said it was a fabulous experience.

“To arrive in this magical city and bike to Green Apple on my first day and discover such a gem made this Kiwi girl feel extremely lucky,” said Handley. “A bookstore with heart and soul; a bookshop of discovery. A great team, too, who work it like a well-oiled machine.”

Green Apple Books co-owner Pete Mulvihill said Handley stayed at his house while she was in San Francisco and worked with him in the store a fair bit during her stay.

“Her curiosity was insatiable, her work ethic was solid, her humor was omnipresent, and I learned a lot from her,” said Mulvihill. “I love to share our store with, and learn from, other booksellers, wherever they’re from, so this was a lovely experience. And now I have a place to stay in New Zealand!”