Noelle Santos, an HR professional with a love of literature, is just a few steps away from signing a lease for The Lit. Bar, a bookstore/wine bar, in her native South Bronx. 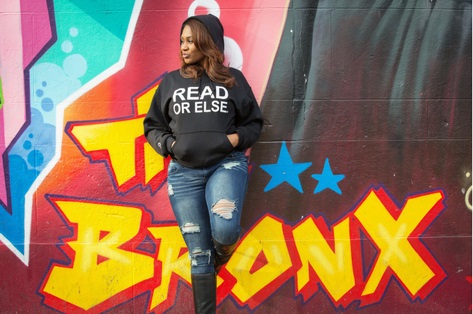 When it opens, most likely this summer, The Lit. Bar will be the only bookstore serving the Bronx, a New York City borough of 1.4 million people that has been without a bookstore since a Barnes & Noble closed its doors last year.

Santos is doing everything she can to bring attention to The Lit. Bar’s Indiegogo campaign, which aims to raise money for the store’s POS system and opening inventory. With 24 days to go, Santos’ crowdfunding campaign has already raised $78,960 from 1,221 backers, 79 percent of her $100,000 goal.

“Right now, I just want to send a big thank you to the entire industry for coming together for me, and to the people who are unable to contribute to the campaign, those tweets, those Facebook shares, those e-mails have all helped,” she said. “I am so grateful.”

Santos said The Lit. Bar will feature “a graffiti and chandelier” aesthetic and will be targeted towards Bronx-raised millennials. She also hopes that a new independent bookstore will show others that economic and cultural growth are on the rise in the borough and will help dispel some of the lingering stigma of the racial tensions and arson the South Bronx experienced in the 1970s.

Since June 2016, when she announced her plans to open a bookstore in the Bronx, Santos has received a lot of positive press, including articles this month in Forbes, Latina, and Vibe magazines.

In September, Santos won the $7,500 second prize in the New York Public Library StartUP! Business Plan Competition. Last month in Minneapolis, Santos drew attention to her plans in a spoken word pitch for her store at the Winter Institute’s first-ever Young Professionals Afterparty. This off-the-cuff performance is just one example of the hard work Santos has put in to generate awareness about her fundraising campaign.

“Independent booksellers have always stuck by me, and being at Winter Institute allowed me to network with them. These are all booksellers that I’ve been following on social media for years, just trying to get a feel for their marketing strategies, and I’ve become fans of theirs,” she explained. “It was amazing to have their support and to be able to have that face-to-face time with them and ask them questions and show my appreciation in person. All weekend, I got so many different booksellers’ business cards with five-dollar and 20-dollar bills wrapped around them.”

Santos’ success at the Winter Institute was followed by several high-profile pledges and plugs for her Indiegogo campaign, including a $5,000 pledge and a promotional tweet from director Michael Moore and a plug from MSNBC’s Chris Hayes, who was at Winter Institute to promote his new book.

Once her crowdfunding campaign is over, Santos plans to sign a lease for a space in the South Bronx’s Hunts Point neighborhood. The property owner is totally on board with her plans, she said, adding that she wanted to find a developer who would not just provide a space for her business but who would also be supportive of its mission so that The Lit. Bar doesn’t meet the same fate as the borough’s last Barnes & Noble.

“In the neighborhood, we are getting a wave of gentrification and seeing a more affluent population move in, and that is a real concern for anyone who wants to open a new business and especially for the businesses that are already there. For this reason, I felt that I needed to connect with the property owner on a personal level,” Santos said. “Now that we have all this press and buzz around The Lit. Bar, there are a lot more property owners and developers who want to be tied to it. These are property owners who wouldn’t look at me before and now they are knocking on our door to give us a home.”

Santos said that at first she was against doing a crowdfunding campaign and felt it was in poor taste for a for-profit business to ask for money. She originally intended to create a crowdlending program similar to Greenlight Bookstore’s initiative; however, after meeting with Greenlight co-owner Jessica Stockton Bagnulo in Brooklyn and getting some more information about the business’ crowdlending program, it became clear that route would have left her with an unacceptable amount of debt.

“It took a few weeks for me to warm up to the idea of a crowdfund, but I just had to put my ego aside,” she said. “Fortunately, the community didn’t judge me and they’ve supported me and dug into their wallets to help support us. It still feels a little awkward to me, because that is my personality type — I never ask for anything — so it was really hard to work my mind around it, but the community has uplifted me and now I’m glad I did it this way.” 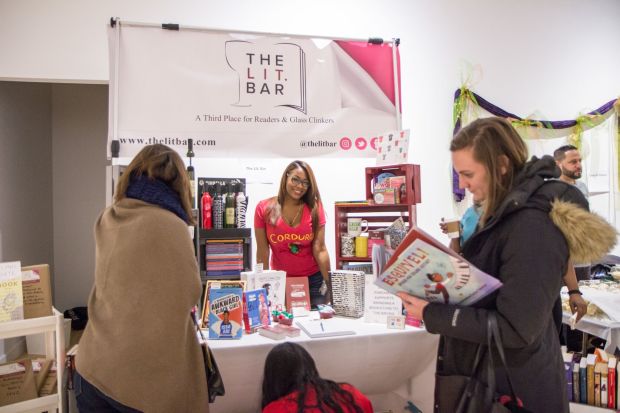 The Lit. Bar pop-shop at the Bronx Museum of the Arts in December.

Santos also has backing from two local incubators, including the Bronx Overall Economic Development Corporation (BOEDC), so she doesn’t anticipate roadblocks in getting the rest of the capital she needs. Other funds will come from her personal savings, she said.

“None of this was an accident. Everything up to this point was by design,” Santos said, from reaching out to other booksellers who were willing share their thoughts on her idea of opening a bookstore, to attending a Paz & Associates’ “Owning a Bookstore” workshop, to reaching out to BookBar owner Nicole Sullivan, who became her mentor, to entering the NYPL business plan competition.

“Now there is nothing in my way,” she said, “except for the crazy things that could happen with construction and lease agreements.”

Read about Santos’ journey to open The Lit. Bar on her blog, 1stnoelle.com.