On Saturday, September 17, publishers, sales representatives, authors, friends, and staff gathered at Northshire Bookstore in Manchester Center, Vermont, for a private sit-down dinner and cocktail celebration in honor of the shop’s 40th anniversary. 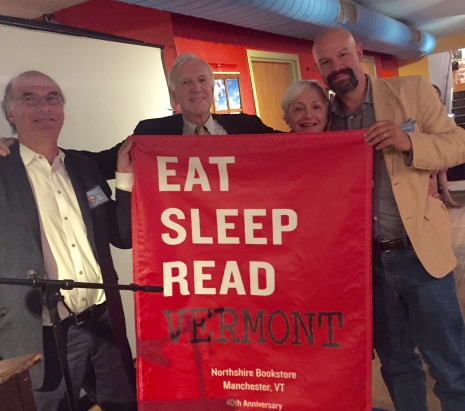 Northshire co-owner Chris Morrow, who joined the American Booksellers Association’s Board of Directors in May, said this particular anniversary “seemed worthy of a celebration.”

“It is confirmation of the success of our approach to the business,” said Morrow, who added that the gathering also served to honor his parents, Barbara and Ed Morrow, who founded the bookstore in 1976. The family opened a second store, in Saratoga Springs, New York, in 2013.

“I am a lucky guy,” Chris Morrow said in his speech on Saturday.  “Most people are fortunate to have one mentor. I’ve got two and they are my parents and the store’s founders, Ed and Barbara. They are consummate professionals and superb booksellers. Their commitment to excellence, while sometimes frustrating, is exceptional. They have poured their hearts and souls and countless hours into this place.”

Morrow also illustrated the impact of the Northshire bookstores on their local communities by sharing a letter from a parent who was frustrated by her son’s reluctance to read until a store staff member found just the right book to spark his interest in reading. Another customer, a local professor, was so moved by the Saratoga Springs bookstore’s Black Lives Matter window display that she sent photos of it to her friends and family.

“There is something special about being involved in an art form that spans centuries and that has been essential to the flourishing of cultures, to the expansion of minds, and to the spotlighting of the sacred in everyday life,” said Morrow. “This is just one small example of the power of books, booksellers, bookstores, and taking a moment to pause and connect with our fellow human beings — that is how I define sacred.” 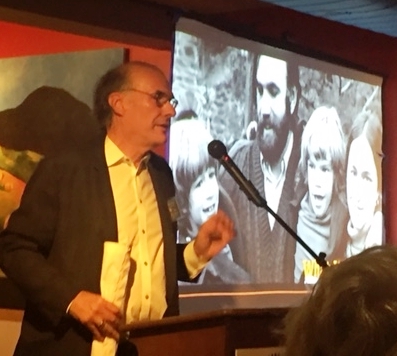 A slide during a look back at the history of the store features the young Ed and Barbara Morrow and their children. (Photo by Alison Greene)

ABA CEO Oren Teicher, who told the event’s other guests he was delighted to be there to represent everyone at ABA “as well as Northshire's countless friends and bookselling colleagues from across the country,” presented the Morrows with an IndieBound “Eat Sleep Read Vermont” banner for the bookstore.

“Walking around this store cannot help but give you confidence in the future, and I am sure there will be many more Northshire milestones to celebrate,” said Teicher. “Not only has this store been important to Vermont, but the Morrow family and many Northshire employees also have been active and effective participants in many, many initiatives supporting indie bookstores and indie businesses overall.”

Noting that Ed Morrow was ABA president in 1990, when he first joined the association’s staff, and some years later Barbara Morrow served on the ABA Board, Teicher said, “We’ve now come full circle with Chris joining our Board this past year. I look forward to many more years of working with the Morrows and Northshire.”

As part of its 40th anniversary festivities, from September 9 to 11, Northshire hosted a customer appreciation weekend, which featured a local watercolor artist, a Vermont comedian, in-store demonstrations from local vendors, and author signings with Wendy Walker, Elizabeth Powell and Jensen Beach, and Richard Russo, as well as a full day of children’s activities.