Hot topics at this month's National Retail Federation Convention & Expo included consumer advocacy, customer satisfaction and loyalty, and the role technology will play in the store of the future. Last week, BTW looked at "Harness the Chaos in Today's Connected World," a session featuring author Daniel Pink (A Whole New Mind: Why Right-Brainers Will Rule the Future, Riverhead) and Fred Balboni of IBM Global Business Services Store of the Future. This week's focus is on the Store of the Future and several of the key findings of NRF's Retail Horizons study.

The Store of the Future

Gauging from the crowds, one of the most popular destinations on the NRF Trade Show floor was the store of the future, "X08: Beyond the Walls of Retail." The theme of this year's exhibit centered on the idea that "the future of retail is moving beyond the walls of retail," NRF noted. "It is moving out of the store and into cell phones and kiosks and onto touch screens and other interactive media."

This year, X08 expanded "to demonstrate not only the in-store shopping experience of the future, but ... how customers are now able to shop 24/7 with the use of new interactive technologies." The store of the future spotlighted the amalgamation of technology and design. 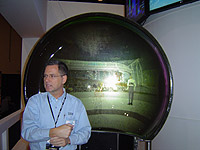 Among the technologies on display was the "Z-Dome" -- a single-user, 3-D "immersive shopping simulator." The consumer simply steps into the dome, uses a keyboard to enter his avatar, and begins a virtual shopping experience. There was cell-phone based residential shopping; touch window shopping from the street; and security systems that allow a store manager to stop theft before it happens by notifying him or her when someone enters the store with a "booster bag." 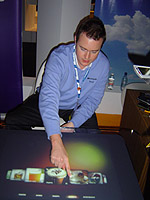 The highlight of the store of the future, or at least the kiosk garnering the largest crowds, as well as the most "oohs" and "ahhs" from attendees, was the flat surface technology of Microsoft Surface. Microsoft rep Jason McConnell sat at what appeared to be a table, but was actually a monitor using surface technology. With the touch of a hand, the surface turned into a restaurant menu where one could order from the menu with another touch and pay the bill by simply dropping your loyalty card on the table; it could be used as a virtual cell phone kiosk simply by placing a cell phone on the table to bring up all the pertinent facts about the phone; or, for a hotel guest, it became a virtual hotel concierge.

It was standing room only again as retailers gathered for findings of the sixth-annual Retail Horizons study, which was co-developed by the NRF Foundation and IBM. The survey was based on data garnered from more than 100 retailers. 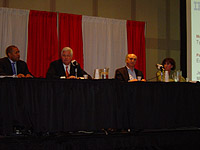 Parnell noted that "there was a surprising shift this year as customer satisfaction ranked as the number one priority" among businesses participating in the survey. Second was expansion and cost containment, and third was employee satisfaction.

Bon Ton's Carroll said the challenge is finding new ways to satisfy a changing consumer base. "How a customer gets information [is changing]," he said, and noted that, for example, twice as many people have cell phones as compared to computers. "Fifty percent of teenagers don't listen to traditional media. The consumer is changing."

NRF's Hinesly stressed that it's imperative that stores use their data to somehow enhance the customer experience. "Siloed" departments, where each division has a slightly different view of the customer, hamper too many large retail corporations. "To be able to blend that data is a key point for the future."

Carroll concurred with Hinesly. "It's the curse of knowledge -- putting the data together and translating it for the management team ... you need to go across the silos and leverage all this information that's available."

In terms of creating loyal customers, Marshall explained, "Expectations are changing: customers are just smarter and less patient. The web provides immediate information and service. We need to replicate it in our stores." --David Grogan