The Oldest Bookstore in the West Turns 160

How do you celebrate a 160-year-old bookstore that’s weathered big box stores and Amazon.com, as well as the Gold Rush, the Civil War, and nearly every San Francisco earthquake on record? With a lot of parties… California’s Books Inc. is hosting 35 small celebrations at its Laurel Village location, 10 at Mountain View, five at Opera Plaza, and “other than that we just eat cake every day,” said co-owners Michael Tucker and Margie Scott Tucker. 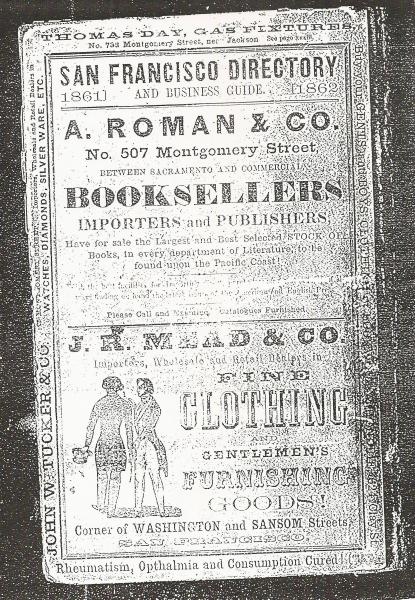 The West’s oldest bookstore got its start in 1851 when Anton Roman, who struck it rich in the California Gold Rush, traded some gold for books and founded a bookshop in Shasta City. Later that decade, he opened a permanent bookstore on Montgomery Street in San Francisco.

Over the years, the store changed hands a few times, and during the 1906 earthquake it burned to the ground. The business became Books Inc. in 1946, when Barbara Thompson and Lew Lengfeld opened a store at the Fairmont Hotel. In the following years, they expanded to locations in Seattle, Southern California, New Mexico, Dallas, and Denver.

When Lengfeld passed away in 1996, he left Books Inc. to a few trusted employees, including Michael Tucker and Michael Grant. “It was good news that we were left the business, and it was bad news that we were left the business,” Tucker has said. It was after the big-box stores had cut deeply into the bookstores’ margins, and, to save the company, the new owners had to close 13 of 15 stores and file for Chapter 11.

By the time Books Inc. emerged from Chapter 11 in August 1997, only Grant and Tucker remained as owners. Grant was responsible for the business’ administration, and Tucker oversaw operations. When Grant suffered a fatal heart attack in 2000, Tucker became president of Books Inc. and worked to carry out their plans to open three additional stores during the next 12 months.

In the succeeding years, the business, which is co-owned by Grant’s son, Nikolai, and his wife, Shannon, has grown to 13 stores, including three Compass Books locations — one in the Downtown Disney District in Anaheim, and two at San Francisco International Airport, the newest of which opened this year.

Continually adapting to the changing retail environment has been key to Books Inc.’s survival. The store hosted its first commercial TV book review program in 1950, and, more recently,  developed a robust e-marketing program. Tucker noted that he and Margie Scott Tucker, who serves as the store’s director of marketing and human resources,  haven’t had much choice about the continual reinvention of Books Inc. “It was out of necessity. We learned when we came out of Chapter 11 … that we needed to continually reinvent what we do and how we do it,” he said.

The recent decline of the big box bookstores isn’t something that Books Inc. is celebrating. But, Tucker noted, “There are tremendous opportunities to connect with new customers and reconnect with old ones. And the value of all independents has gone up because they can quickly adapt to the changing needs of the community.”

In fact, many communities that don’t have a Books Inc. now want one; however, there are no immediate plans for another expansion. Store management is spending the rest of 2011 renovating existent stores.

Tucker is approaching the current rise of e-books “just as everyone else is — cautiously,” he said.  ”We are first and foremost a bookseller, and our job is to sell books in all formats to our customers. However, Google eBooks are a great addition that gives us the opportunity to serve customers who choose to read in that format.”

Working closely with other booksellers both before and during his recently concluded tenure as ABA president has helped his business. “The shared knowledge amongst booksellers is probably one of the greatest advantages in the independent community,” Tucker said. ”The business acumen that we have picked up from the Winter Institute, BEA, and my time on the Booksellers Advisory Council and the ABA Board, has influenced our day-to-day business.”

After decades with filled with ups and downs — building events series and an online presence, contending with the recession, and navigating e-books  —  Tucker isn’t daunted. “We’re still having fun,” he said.