Bookstores that use pop-up forms on their websites to promote their e-mail newsletters report that the strategy is leading to more new subscribers.

Jessica Palacio of independent children’s bookstore Once Upon a Time in Montrose, California, introduced a pop-up on her store’s site in October and has seen an increase in subscribers to its newsletter, which reaches 7,000 customers.

“For sure, we are getting people from them. This week was a little higher than normal. I think we got eight people this week; usually we get three or four,” she said. “Before, from signups in the store or the form we had on the website, we were getting one or two a month, so it’s definitely an increase.” 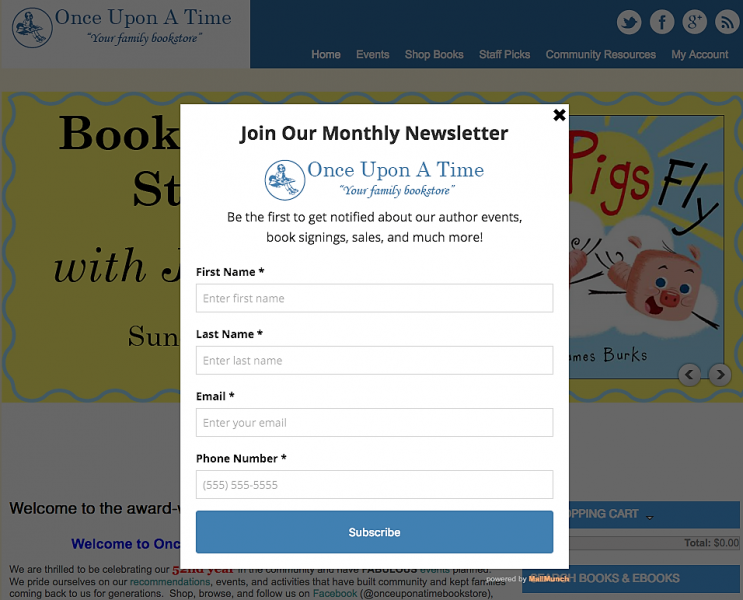 Once Upon A Time invites customers to subscribe to its e-mail newsletter.

IndieCommerce Director Phil Davies explained that while pop-ups once had a bad reputation, the new forms are far less intrusive to the customer, making them a good way to reach potential subscribers.

Pop-ups are floating forms that appear when a new visitor enters a site. Some ask security questions while others ask visitors to sign up for a service, such as an e-mail newsletter.

“We took six stores that initially responded that they personally hated pop-ups, or they just didn’t think it would fit their business model, and asked them to give it a try for six months,” Quinn said. “All six of those stores reported that they saw their list grow amazingly. One store saw a 400 percent growth in those six months. We had other stores that started averaging about four subscribers a week, where they had previously been lucky to have one a month. They all really liked it and ended up keeping it. None of them turned it off after six months.”

One of those six stores was Norwich Bookstore in Norwich, Vermont. Co-owner Liza Bernard said she sends out a newsletter twice a month to about 2,500 subscribers with a focus on events, reviews, and a blog-like post called Bookseller’s Blotter.

While Bernard also signs up customers for her newsletter when they join Norwich Bookstore’s rewards program, the pop-up forms are a good idea, she said. “It’s one more way to allow people access to what we do in our newsletter that they might not see if they are skimming the website,” she said.

Roundtable participant Liz Hopper Whitelam, who opened Whitelam Books in Reading, Massachusetts, in the fall, wondered whether a pop-up form would make sense for her since she is more focused on driving customers to her store rather than her website. “I don’t want to be interacting with my customers in an online channel as much as I want to be interacting with them in person,” she said.

Davies said that since e-mail newsletters are designed to get people inside stores, generating more subscribers will achieve that goal. “We are hypersensitive to the fact that 40 to 50 percent of the reason you have a website, at least for the IndieCommerce system, is to drive traffic to your physical store,” Davies said. “We’re optimizing for that all the time. The interstitial pop-up is not to drive people for online sales, it’s to drive people to the newsletter.”

The IndieCommerce team recommends MailMunch for pop-ups because it works with popular e-mail newsletter providers, including MailChimp and Constant Contact. MailMunch is also compliant with Google’s guidelines for pop-ups on mobile, which, if poorly implemented, could affect a site’s placement in search engine results.

The IndieCommerce team has created a guide on BookWeb for MailMunch integration.

“The information that IndieCommerce gave us is very easy to follow,” said Palacios, who has been surprised to learn that the pop-ups are attracting subscribers from existing as well as new customers.

“It’s good for both new customers and old customers, because we definitely had some customers who weren’t on our e-mail list who signed up,” she said. “They were longtime customers but had never given us their e-mail. It was interesting to me to know they were looking at our website.”

Once Upon a Time’s unsubscribe rate has been unaffected by the addition of the pop-up, Palacios said, with just one or two subscribers a month opting out after signing up. “Occasionally, it will catch someone who is outside of the country. Just this week, it was someone from France. We’ll see if they stay on the list,” she said.

ABA hosts the 30-minute marketing roundtable videoconferences at 11:00 a.m. EST on two Thursdays a month; the next roundtable is on February 22. Stores do not need to be part of the IndieCommerce program to participate — all ABA members are invited to join in. Booksellers who would like to participate can send an invite request to Phil@bookweb.org.