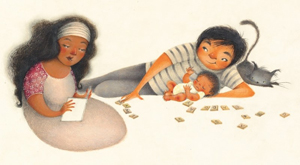 American Booksellers Association member stores can place their orders for this year’s ABC Best Books for Young Readers catalog from now until September 6 via an order form on BookWeb.

The full-color, 16-page consumer circular is slated to be in stores in September. It will feature nearly 200 frontlist and backlist titles for children and teens, all suggested by ABA member booksellers. The catalog carries no fourth-quarter/holiday branding so booksellers can use it throughout the year.

Heather Hebert of Children’s Book World in Haverford, Pennsylvania, said she had not used the ABC Best Books for Young Readers catalog in previous years, but was inspired to when she saw another store using it as part of a book fair at a local school. “A light bulb turned on and we started seeing the possibilities for using the catalog as an option not just for school book fairs but as a way to reach customers beyond our store, in communities and workplaces that we would normally not be able to service,” said Hebert. “This has helped us increase business and increase awareness of our store.”