Panelists Offer Insights on Planning for a Second Location

At the American Booksellers Association’s education session “How to Plan for a Second Location” at BookExpo America 2013, a panel of experienced booksellers shared their experiences of starting a new venture, including determining when to expand, arranging startup capital, finding a location, coordinating staff, managing inventory, and handling POS and store logistics. 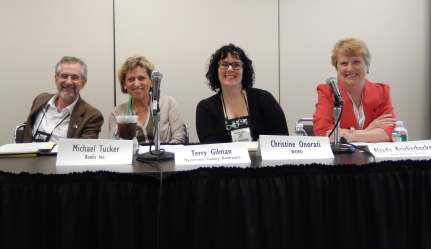 When Tucker became co-owner of Books Inc. in 1996, the business was in bad financial shape and faced fierce competition from chain stores. At the session, he related how the company had no choice but to file for Chapter 11 and close 10 of its then 12 store locations. “The chains flattened all of our large locations,” many of which were in malls and shopping centers, Tucker said. Starting from close to scratch, Books Inc. developed a model of 3,600- to 4,000-square-foot stores with fixtures that could be easily moved to accommodate aggressive events programs. Each subsequent store — there are currently nine Books Inc. locations, as well as two Compass Books and a bzinc at San Francisco International Airport — has adopted its own personality and goals based on the neighborhood it serves.

“You bring over what would be your best practices from the other store, you broaden your community reach with schools and with libraries, and you expand your events possibilities,” said Tucker. “What you’re able to do in the community really does become enhanced.”

Terry Gilman and her partners opened the first Mysterious Galaxy in San Diego in 1993 and it has since developed an international reputation for great events, authors, and inventory. In 2011, the partners decided to open a second location, this time to fill a void that Gilman found in Los Angeles. Mysterious Galaxy’s Redondo Beach location opened in a building owned by a family member. “If I build it, they will come,” Gilman said of her thinking at the time. “Thus begins the cautionary tale.”

Among the positives of Mysterious Galaxy’s second location, Gilman noted a beautifully designed space with a café, shared staff talent between the two stores, shared inventory and expenses, great partnerships with libraries and publishers, and moveable fixtures to make a space for events that could hold 400 people.

However, Gilman said that it has been difficult watching the slow growth of the L.A. store’s customer base, and she hadn’t realized that adding a second store would double her personal workload, including time spent on store management, newsletters, finances, and training. “That limited my ability to make contributions day-to-day to the store itself,” she said.

And, importantly, the opening of the Redondo Beach location actually hurt sales at the San Diego store. “I thought two stores would multiply the effect — that the customer base would expand incrementally. I really moved some of the business from the San Diego store to the L.A. store,” Gilman said. To ramp up sales at the Los Angeles store, Mysterious Galaxy tested a kiosk location in a nearby mall to promote the new business, but five months at the kiosk did not substantially influence the number of customers shopping at Redondo Beach.

Since WORD opened in 2007 on a near-empty street in Brooklyn, New York, with just Onorati working full time, the bookstore has built its brand and the community along Franklin Street has sprung to life.

The idea of a second location wasn’t in the cards for Onorati until the perfect space opened up. “I was actually quoted in an interview a month before I announced my new store saying that I would never, ever open another store,” said Onorati. “Sometimes a location really can make the decision for you.”

Visiting with local shop owners and hearing the feedback of Jersey City residents, Onorati discovered how passionately people wanted a bookstore in the area. The store, which will be located at a plaza that serves as a mass transit hub, is being designed specifically to accommodate events and will feature a coffee shop. Onorati is also ensuring that the second location is catering to the new neighborhood, not just replicating the original store.

Avid Reader, which is in its 26th year, opened a second location just three doors down from the main store. Avid Reader Active offers toys, games, how-to books, cookbooks, travel books, and cards, while the original store kept its inventory of literature, history, and children’s books. A concerted effort has been made to ensure that both stores are regarded with equal stature by the stores’ staff and the community and that each has its own personality, said Knickerbocker.

Knowing just when a bookstore needs to expand is the critical first step in the process, and for Tucker, that’s at the point when sales have reached the maximum per square foot. “You’re either going to look for another location or you’re going to get some higher-priced items to put in the store,” he said. “There’s really a level at which you plateau.”

Onorati agreed. “I can see the point where we won’t be making $5 million in this tiny 850-square-foot store,” she said.

Knickerbocker’s store was “bursting at the seams” and needed the additional square footage to properly display inventory. “The door opened, and the possibilities were there,” she said.

Proper funding can be hard to come by, however, and it can make or break the expansion.

Books Inc.’s new stores are funded with cash flow from its other locations. Tucker also stressed that he always keeps up creative negotiations with landlords, actively pursues low initial costs, and has a flexible attitude when considering the store’s parameters. Tucker also works with profit-and-loss statements to analyze the ventures, and he mentioned a helpful interactive bookstore finances worksheet available on BookWeb.

While funding for the original WORD came from Onorati’s home equity, private investors funded much of the second store and the local Economic Development Corporation helped her in securing loans.

Knickerbocker saw a 70 percent increase in Avid Reader’s sales when the local Borders closed and that additional cash flow was used to open the new store and build more products into the inventory. “Everything fell into place,” said Knickerbocker.

When settling on the physical location for a second store, the panelists said it was crucial to do the research. “My gut had told me this wasn’t the greatest location,” said Gilman of her family-owned space in Los Angeles. Though sales have picked up, the location requires customers to brave Los Angeles highway traffic.

Onorati learned about the space in Jersey City through family, and her interaction with fellow business owners in the neighborhood solidified her confidence in opening a store there. When she spoke with local restaurant and boutique owners and library staff members about opening a bookstore in town, the response was overwhelmingly positive, Onorati said.

Tucker also said that it was beneficial to talk to local business owners and mentioned that it can be very helpful to find out if the city has development plans for the area.

“A lot of the research is how you personally feel about things,” said Knickerbocker, adding that one thing to consider is the landlord for the space and that can make all the difference.

Tucker echoed Knickerbocker’s suggestion. He frequently dines with the landlords of his stores, fostering an open and comfortable relationship with them and keeping them in the loop about the store’s finances.

Staffing is yet another piece of the puzzle of opening a new location. With Books Inc.’s multiple locations, Tucker said that many of their young staff members vie for the buying spots at a new store. He is grateful to have positions for employees to move up to and finds new staff members bring great enthusiasm and enjoys blending them among the stores. Books Inc. also does extensive training to make sure staff can easily move from store to store.

A number of Mysterious Galaxy’s new employees have come from shuttered Borders stores and have little familiarity with the independent world, said Gilman, adding that has been a learning experience and she wishes she had invested more time in training and providing benchmarks for them.

As far as staffing WORD, Onorati noted, “It’s our job to make bookselling a viable career for young people… I want to be able to have staff that are smart and well-paid and will stay with me, and will define what we do.”

“Being three doors down, we have some luxury to share staff,” said Knickerbocker. All of the staff, including her, split time between the stores, and an additional person was hired to oversee the new store.

With a new location, a decision must also be made about how far to intertwine operations with the existing business or whether each should act as a separate entity, with discrete inventory, buying practices, and point-of-sale systems.

Books Inc. keeps its frontlist buying at the main office, while each store has its own restock buyer. Returns are centralized to save on freight, and all inventory is pulled and listed collectively online. While margin increased with additional stores, much of the profits went back into payroll, Tucker said.

Gilman is trying a different point-of-sale system, a cloud-based program, at the Redondo Beach store. Each Mysterious Galaxy acts as its own account, with its own ship-to and bill-to addresses. The stores do move inventory between the two locations, which Gilman has found particularly helpful when dealing with signed stock and events. The buying remains at the San Diego store.

Onorati works as WORD’s frontlist buyer, and store managers handle the backlist and restocks. Onorati is exploring moving both stores to a cloud-based POS system and has set up a second ship-to location for books to be sent to New Jersey. The stores are run separately, and the second store is set up as a limited liability corporation.

Avid Reader and Avid Reader Active are considered one business, and QuickBooks has been helpful for tracking the expenses and records of each store. An inventory manager does all book buying, and Knickerbocker handles the buying of cards, toys, and games.

Several of the panelists noted that now in particular is a promising time to expand because many of the chain stores have left towns across the country without bookstores, though it’s important to be aware of fellow independents already in place.