Part I: A Q&A With Barry Lynn, Author of Liberty From All Masters 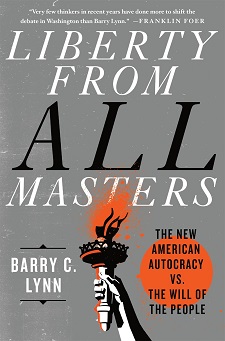 Below is the first of a two-part Q&A with Barry Lynn, author and executive director of the Open Markets Institute, about his new book, Liberty From All Masters (St. Martin’s Press).

Lynn’s book, out September 29, examines how monopoly power, specifically that of Google, Amazon, and Facebook, threatens liberty, democracy, prosperity, and national security. The book details how concentrated power has created or worsened many of the most serious problems the U.S. faces today. Despite its stark warning, the book also offers a path forward by explaining that the country’s political and legal history offers a clear contrast to the lack of antitrust enforcement seen today.

Stayed tuned to Bookselling This Week for part two of the interview next week.

ABA: What initially sparked your interest in anti-monopoly issues, and when did you first realize that market concentration poses a critical threat to democracy?

BL: The first time I fully understood the threat posed by Amazon and Google was early February 2010. I was at the ABA Winter Institute in San Jose, where I was speaking about my book Cornered, which was about monopolization in America. Hachette and the other big publishers had begun to complain in public about the way Amazon was managing book sales. Just prior to the Institute, Amazon targeted one publisher, Macmillan, and shut down its sales. It was at that moment that I realized that Amazon had captured a degree of power over authors, publishers, booksellers, and readers that posed a potentially huge threat to our democracy. In the years since, that event has shaped all of my work on Amazon, and that of my team at Open Markets. It also has shaped our fight against Google and Facebook’s control over news publishers.

Even before that event, however, I had understood that monopolists can threaten democracy in many ways. They do so by using the money and power to subvert politics. They do so by degrading the lives of our communities, through the bankrupting of independent businesses and farms. They do so by driving down the wages and restricting the liberties of working people. They do so by harming the general prosperity of the nation, and undermining our common security.

Strangely, what first alerted me to America’s monopoly crisis was an earthquake in Taiwan in September 1999. At the time I was running a magazine called Global Business and our mission was to help the executives who run Fortune 500 corporations do a better job of managing their international operations. Within days, the earthquake resulted in the shutdown of manufacturing across the Pacific. The reason, as I soon learned, was that the world’s entire supply of a certain important type of semiconductor was manufactured in the industrial town of Hsinchu, and the earthquake had disrupted the transportation of those chips to factories in California, Texas, and elsewhere. Here was proof that dozens of major corporations, and every industrial nation in the world, had come to rely on a single cluster of factories in a quake-prone country just off the coast of China. That’s what first set me on my quest to understand the dangers — and the source — of monopoly.

ABA: In Liberty From All Masters, you identify Amazon, Google, and Facebook as the greatest and most immediate threats to American democracy and individual liberty. Can you explain what you mean by that?

BL: Amazon, Google, and Facebook pose so many different threats that it can be hard to track them all. But six especially stand out.

First is their ability to silence who they will, when they will. In 2018, Facebook shut down all traffic to Wired magazine for a month, after Wired published an article the corporation did not like. Similarly, as the MarkUp has reported, Google has the ability to vanish the emails even of powerful politicians. Even when these corporations don’t use this power, the mere knowledge that they have it affects how individuals subject to that power act and speak in the real world.

Second is how Amazon, Google, and Facebook use their power to steer profits away from independent publishers and into their own pockets. One way Amazon does this is by going into direct competition with book publishers, by offering its own house-brand books. Google and Facebook use their power over the platform where people exchange information to divert advertising away from news and magazine publishers into their own vaults. This hurts not only old-school publications like the Boston Globe or Miami Herald. It also harms online publications like Buzzfeed, Vox, and Talking Points Memo.

Third is that these corporations — Google and Facebook especially — are the main pathways along which disinformation and propaganda enter American politics and discourse. And let’s be clear, although both corporations claim to be upset by such disinformation, both profit enormously from the business of selling lies, and have done nothing to change their business models to lessen the problem.

Fourth is that all three of these corporations routinely use the fear they inspire to silence their victims to a point where it can be hard to enforce the law. Investigators in Congress, law enforcement agencies, and journalists routinely tell of how difficult it is to get the victims of Amazon, Google, and Facebook to speak up in public. The victims will tell the most terrifying tales behind closed doors. But once on the record, they shut up for fear that the corporations will punish them, by cutting them off from the market.

Fifth is the way Amazon, Google, and Facebook seek to bankrupt any potential competitor, even when doing so threatens the diversity of opinion and debate in America. There is no better proof of this than Amazon’s efforts to undermine and destroy the independent bookstore, which plays such a fundamental role in educating citizens and creating communities of thinking people.

Sixth, these corporations have built some of the most awesomely powerful spy systems in human history, and increasingly use the data they collect not only to manipulate commerce and speech, but to track the actions and words of their own workers in ways designed to scare these people into submission and silence, both in the workplace and in the world.

ABA: In the book, you channel John Adams writing the Massachusetts Constitution when Adams speaks of “a government of laws and not men.” You say that it is important to remember that Big Tech’s power undermines the rule of law and “in its place establishes a rule of man, of Mark Zuckerberg, of Jeff Bezos.” How can the United States be restored to a government of laws and why is that important?

BL: Rule of Law is the foundation of liberty and democracy. This is the essential message, and the most important achievement of the American Revolution. Rule of Law is based on two foundations. First is that the government treats every individual the same, that it never discriminates in delivering either justice or the benefits of a good society. This is what Adams was addressing in his draft of the Massachusetts Constitution. Second is that all private monopolists treat every individual the same and provide the same terms of service at the same price to all comers.

Imagine if we allowed a monopolist to take control over the supply of bread, and then to sell the bread only to some people, who it chooses according to its own ever-changing whim. The result would subvert all order in society and all security. It would deprive every individual of the basic confidence we all need to get from one day to next, and to do all the basic work of life that needs to be done. Instead, every day, every moment, we would devote all our attention and energy to figuring out how to feed our children and ourselves. That’s why we all understand that it would be insane to allow a bread monopolist to discriminate in this way, and why we would never allow this to happen.

One result is that they get to force even very big corporations to pay ever larger amounts of money just for the privilege of getting to cross their platforms to make their sales.

The good news is that previous generations of Americans developed a simple set of principles and built a vast array of tools and institutions to empower us to deal with precisely these sorts of threats. These previous generations did so in response to the actions of the original network monopolists, the railroad and the telegraph. Among the tools we use to prevent such dangerous discriminations are common carrier law, utility law, and prohibitions on self-dealing. One of the simplest of all tools is simply to prevent the middleman from manipulating the prices set by the maker of the product. The United States used to do this for almost all goods for sale in our stores, but it stopped doing so in the early 1980s. Germany and France are among the nations that continue to apply such rules to their book industries.

4) In the preface of the book, you refer to COVID-19 as our last warning, saying, “Every one of us knows not to put all our eggs in one basket. Yet when it comes to many of the products and foods and drugs that keep us alive, monopolists have put most or even all the machines that produce these goods in a single city, often in a single factory, often on the other side of the world.” Can you explain how the COVID-19 pandemic was exacerbated by concentrations of power?

Monopolists pose many different types of threat, from using power to threaten democracy and personal liberty, to jack up prices, to drive down wages, and to cut supply and reduce quality of even essential goods like pharmaceuticals and foods.

In terms of security, one of the most dangerous things monopolists do is reduce the number of places where a good is produced, often to a single factory. This means that when something goes wrong, either inside the factory or near it, we can lose much or even all of that production suddenly, shockingly. Since the earthquake in Taiwan I noted above, we have also seen supply chains disrupted by floods, volcanoes, financial crashes, and perhaps most terrifying, by conflicts between nations.

This is an issue I know well. In response to what I learned from my study of the Taiwan earthquake I published an article in Harper’s in 2002 called “Unmade in America.” I then wrote a book called End of the Line, published by Doubleday in 2005. Then in October of 2005, I published a warning in the Financial Times that predicted what happened in the early days of COVID-19, almost 15 years before it happened. “One cross-border system that would collapse in the event of a pandemic,” I wrote, “is the one the U.S. relies on for medical respiratory masks.”

In the years since, my team and I have carried these warnings into the highest offices in the U.S. Treasury, the White House, the Pentagon, the CIA, and Congress. We have engaged with top officials in Japan, France, Germany, the U.K. and elsewhere. And yet, until COVID-19 there was almost no sustained effort to understand the problem, let alone respond. To its credit, the Trump administration has made some efforts to actually fix the problem. But like so much in this administration, the efforts have been confused and contradictory, and even the best-intentioned officials have found it hard to make real advances.