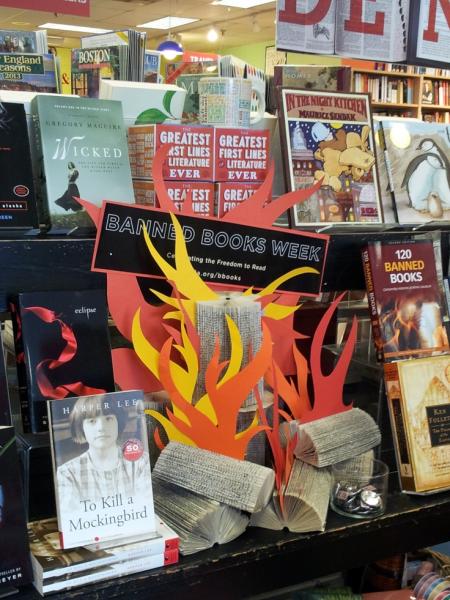 Now with nearly 300 followers each and a recent write-up in the Christian Science Monitor, two Pinterest boards created by Gary Robson of Red Lodge Books & Tea in Red Lodge, Montana, feature a variety of bookstore display ideas and offer a venue for booksellers to share photos of their clever creations.

Creative Bookstore Windows lets booksellers show off bookstore windows featuring all types of merchandise, and Effective Bookstore Displays is a forum for sharing merchandising ideas for table displays, signage, shelving, and other avenues.

Robson has created a new board, Book Banning & Censorship, which features ways to display and advertise challenged books. “Being both an author and a bookseller, I’m not a fan of censorship,” wrote Robson in his most recent blog post, and to get participation rolling with the board, Robson has issued a challenge to booksellers to get 500 followers and 200 pins on the board in time for Banned Books Week, which runs September 21 – 27, 2014. Robson is also inviting librarians and authors to participate.

Additionally, Robson is asking booksellers participating on the boards to focus on ideas that all booksellers can use in their own stores and to select the best board for each photo, rather than posting to all of the boards.

“There are a lot of good ideas out there, and we want to get as many people participating as we possibly can,” wrote Robson. While the community photo-sharing space has attracted a number of followers, more booksellers are encouraged to share their photos in order to make the boards a robust resource for bookstores around the country who are seeking display ideas. When sharing store photos on Facebook, Twitter, Tumblr, or other social media, add a picture or two to Pinterest for fellow booksellers to see and be inspired by.

Contributions to the boards are coming from Porter Square Books in Cambridge, Massachusetts, Burke’s Book Store in Memphis, Tennessee, and Afterwords Books in Edwardsville, Illinois. The Christian Science Monitor said of the featured displays: “One thing brick-and-mortar stores can offer that can’t be found on book-buying websites: beautiful in-store displays.”

To share pictures and ideas on the Creative Bookstore Windows, Effective Bookstore Displays, or Book Banning & Censorship pages, visit the page, follow the board (sign up for Pinterest via a Facebook account or an e-mail address) and leave a comment on the board or on Robson’s blog post to be authorized to pin to the boards. These pages are open to ABA members and non-members alike. For more information, check out Robson’s blog post documenting the project.