Noelle Santos’ The Lit. Bar, a new bookstore/wine bar planning to open in the South Bronx next year, has been named a finalist in the New York Public Library’s New York StartUp! Business Plan Competition. 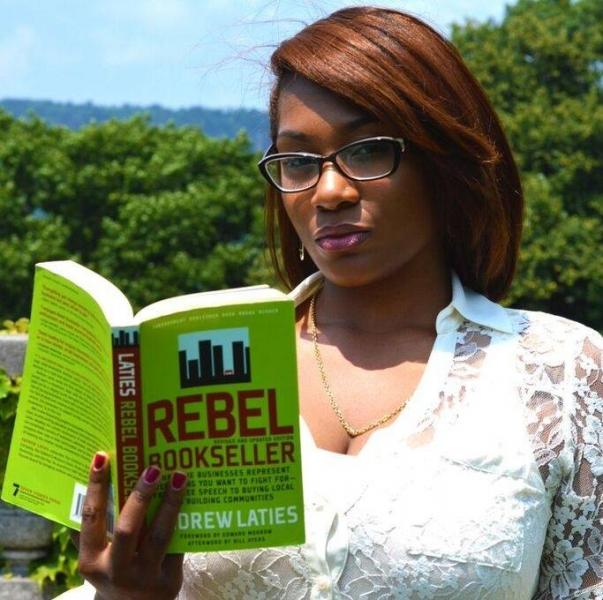 On Tuesday, August 9, Santos will have 10 minutes to present her business plan to a panel of judges, with 10 additional minutes to answer judges’ questions. The Bronx native will find out whether she has won the $15,000 prize in the first week of September.

“I am so excited going into the next and final round,” said Santos. “Normally I would be nervous, but I feel readily armed with my ABACUS stats and operational plans that indies have united to help me with… I’m also working with a small business development advisor from a local college to help perfect my pitch.”

Santos said competition organizers have provided her with some general topics to address during her presentation as well as several prep questions specific to her business plan. In the meantime, Santos, who acknowledges she is “a very wordy person,” will be practicing getting her presentation down to a succinct 10 minutes.

The process of putting together Lit. Bar’s business plan began a year and seven months ago, after Santos learned that the borough’s only other general bricks-and-mortar bookstore, a Barnes & Noble in the northeast Bronx, was in danger of closing at the end of 2014.

“This process has taught me so much more about my business and myself than I could have imagined,” she said. “The questions I was forced to answer took such bravery to research and answer… Want to know what you’re made of? Write a business plan... I promise that what you’ll end up with is more for you than for anyone else.”

In a recent blog post on 1stnoelle.com, where she has been chronicling her journey to open the store, Santos thanked some of the people who have helped get her to this point, including Nicole Sullivan, the owner of BookBar in Denver, Colorado, who has served as her primary mentor since day one. Sullivan wrote her a glowing letter of recommendation to the NYPL contest committee, she said, and provided her with years of sales data and best practices to show proof of concept.

Santos also thanked Donna Paz Kaufman, co-operator of Paz & Associate’s Owning a Bookstore retreat on Amelia Island in Florida, which Santos attended in 2015, for giving her plan a thorough review to ensure her projections were realistic.

If she wins the competition, Santos plans to use the prize money to cover the cost of her new store’s inventory management/point of sale system. But, she said, the point of entering the competition was also to gain credibility for her bookstore.

“My primary reason for entering the competition was that it is presented by the New York Public Library; to be honest, that was more important to me than the money,” she said. “Recognition from such a prestigious literary institution would give me the credibility I need to educate the public on the state of indie bookstores — that my concept is viable in today’s climate and that my target market will support it.”

Since early summer, Santos has been on TV three times and featured in a dozen blogs and online publications. This recognition by the media has resulted in prospective property owners vying to give The Lit. Bar an affordable home, she said. These days, Santos has been viewing several potential spaces a week.

In addition, since the influx of exposure this summer, membership in Santos’ book club, Readers and Shakers, has reached more than 160 people. At the same time, her blog following has grown to almost 1,000 subscribers, and she has gained a couple thousand more on her social media platforms and e-mail list.

“My favorite responses are the letters from local authors and residents inspired by my journey, giving testimonies on what The Lit. Bar’s symbolism means to them, and offering their time and resources for free,” she added.

After Santos competes on August 9, she will begin planning and securing pre-pledges for her crowdfunding campaign, which launches in September. Santos said the start date for the campaign has been moved up a bit due to a recent offer from a supporter to help fund start-up costs on the condition she show some “good faith” in the form of cash and the community coming together in support of the project. Going forward, Santos’ goal is to sign a lease by October.