With Podcasting, Indie Bookstores Take to the Digital Airwaves

When it comes to expanding their brand, some independent bookstores are looking to podcasts, a growing form of media that allows people to record content that can be listened to over the Internet. 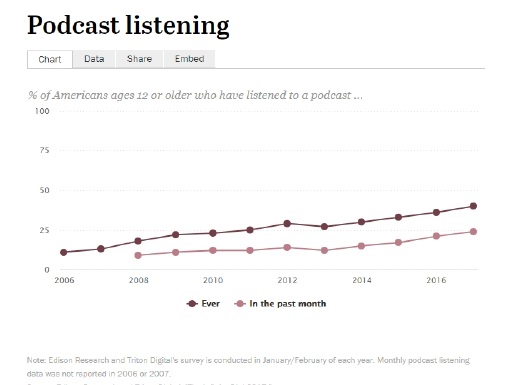 Data from the Pew Research Center shows that the number of Americans 12 and over who listen to podcasts has increased significantly from 2006 to 2016.

are digital audio files that can be automatically downloaded online and listened to on one’s computer, phone, or other mobile device. Statistics from the Pew Research Center show that the number of Americans ages 12 and over who say they have listened to a podcast has increased dramatically from 2006 to 2016.

Annie Jones, owner of The Bookshelf in Thomasville, Georgia, launched From the Front Porch when she took over the store two years ago as a way to introduce herself to the local community. A year ago, she was joined in her weekly conversation about “books and small business and life in the slow-moving south” by a co-host, Bookshelf bookseller Chris Jensen.

“The goal of the podcast quickly became to expand beyond our Thomasville community and reach out to customers who might not have heard of us before,” said Jones, who said she gets about two to three thousand downloads per episode from all over the country. 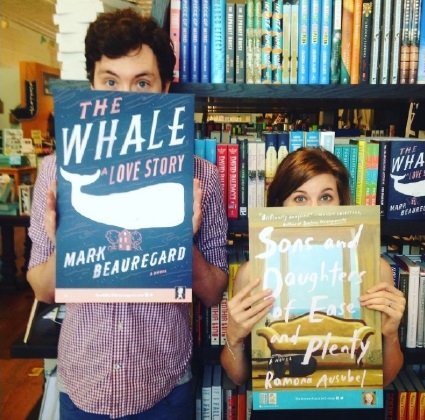 Chris Jensen and Annie Jones, co-hosts of The Bookshelf's "From the Front Porch" podcast

Jones started out recording from her front porch but now does so from her office at the store using GarageBand, Apple’s digital audio platform, along with a microphone. One of the most important moments along the way to the show’s 142nd episode, Jones said, was having Anne Bogel, founder of the podcast What Should I Read Next? on as a guest; Jones and Jensen then appeared on Bogel’s show, resulting in some helpful cross-promotion.

It is only in the last six months that the show’s popularity has noticeably translated into revenue; what has also helped is allowing for sponsors on Patreon, where people can pay for bonus episodes and behind-the-scenes content.

“If people think starting a podcast is going to be this big monetary project that is going to bring in more revenue, I’m not sure that’s the best reason to do it,” said Jones. “We keep doing it because we like each other and because we enjoy talking about books anyway. It’s just really fun.”

The Bookshelf recently created a separate website exclusively for the podcast. From the Front Porch can also be accessed on iTunes, Stitcher, Google Play, and the store website.

Open Stacks, the new podcast of Chicago’s Seminary Co-op and 57th Street Books, brings listeners conversations with scholars, poets, novelists, and activists on eclectic subjects that reflect the breadth of the store’s scholarly offerings. Starting the podcast was a collective decision by the management team across both stores, said Co-op Marketing Manager Colin McDonald, who hosts the weekly podcast.

Over the last three and a half years, the store’s author events schedule has expanded to 400-plus events annually. “Our co-op members all over the country and internationally were expressing interest in having access to events even if they weren’t based in Chicago,” said McDonald. “So after a year of fielding those requests and having to disappoint people, we finally decided we needed to invest in and take seriously the idea of a podcast.”

McDonald and the rest of the marketing team attend weekly production meetings where they design each episode’s content. McDonald said they try to highlight books from university presses or small publishers that aren’t getting a lot of attention in the mainstream.

“We’re not just taking the most recent events we’ve edited and scrambling them together — we’re trying to devise themes that we see across different episodes and content in books,” McDonald said. “We typically include two events per episode and then try to supplement that with some kind of content that comes from the culture of our stores.”

As far as promotion, said McDonald, talking with customers at the register about the podcast has become part of everyone’s daily responsibilities. In the future, added Kit Brennen, one of the podcast’s two producers, they hope to better leverage the podcast to promote the co-op’s other programs.

“I think it will be an ongoing process to integrate the podcast with all of the other marketing that we’re doing,” Brennen said. “That’s a big next step for us.”

Kim Hooyboer, manager of Third Place Books, and Emma Nichols, a bookseller at The Elliott Bay Book Company in Seattle, Washington, have hosted the Drunk Booksellers podcast together since 2015. The two met while working at WORD in Jersey City, and the podcast grew out of a drunken conversation at a bar. Over the years, the project has also become a great way to network with indie booksellers, said Hooyboer.

“It’s been really fantastic to be able to talk to owners and booksellers around the country, and then we get to actually see those people at all the ABA conferences,” Hooyboer said.

Drunk Booksellers most recently interviewed bookseller Javier Ramirez of The Book Table in Oak Park, Illinois, who runs the industry meet-up Publishing Cocktails. In each episode, they start off talking about books they like, then transition into talking about bookselling in a way that is accessible to the layman listener. While this is going on, the participants sip on a cocktail suggested by the guest bookseller, which often has a punny name like “Tequila Sun Also Rises.”

While podcasts are a lot of fun, they are also a lot of work and time, Hooyboer and Nichols agreed, so booksellers who are interested in starting a podcast should record and edit a couple of trial episodes to make sure they can handle the workload. The show, which they post through Libsyn, one of the major podcasting platforms, does require a lot of editing work because they need to pare down down their three-hour conversations to one hour.

“Right now, what works best is if each person is recording on their end, so basically Kim and I have a microphone and we’ll be recording in GarageBand,” said Nichols, who said both use the $30 Samson Go Mic. “Kim and I do all the editing on GarageBand but also occasionally use the Audacity software.”

One of the ways for booksellers to start a podcast is to partner with a local radio station, which can make things much easier on the production end. The Boulder Book Store Radio Club is a partnership between the Boulder Book Store in Boulder, Colorado, and local station KGNU. Every month, head buyer Arsen Kashkashian selects a book and he and KGNU’s Maeve Conran are joined by the author in the KGNU studio to discuss it (the Radio Club’s October 26 selection was My Absolute Darling by Gabriel Tallent).

Kashkashian said he was invited to come on KGNU two years ago to talk about the best titles to buy for Christmas and the station decided to continue on with a regular book club feature. When Kashkashian noticed that a lot of their listenership was coming from online listeners, he suggested that the station also create a podcast that people could get on iTunes.

“We came up with an idea to do an additional interview with the author after the formal interview for the radio show that would be a more expansive, after-hours-type interview exclusively for the podcast,” he said.

Kashkashian suggests that booksellers who are looking to start their own podcast approach local radio stations, which are always looking for content. They also have all the necessary technical facilities to handle the posting and editing duties.

“It helps in all sorts of other ways, too,” he said. “If we have a few big events coming up, I just shoot off an e-mail to the news director and suggest that this might be a good author to interview. More often than not, they end up interviewing them before our event and plug it on the radio.”