In two short weeks, Nintendo shares have more than doubled in value. The Pokéconomy gave Brexit a run for its money; soon after the vote, Pokémon Go overtook Britain’s withdrawal from the European Union in worldwide Internet search terms. Digital entrepreneurs have insisted that, through the magic of Pokémon Go in-app purchases, “you can have more customers than you’ve ever seen in your life.”

Googlers have already found Pokémon Go explained in 400 words or less and 2,000 words or more. Armchair psychologists and certified professionals have cited the game as a better treatment for depression than prescription medication. Addiction therapists may not have seen an increase in foot traffic yet, but only because they haven’t bought enough lures. 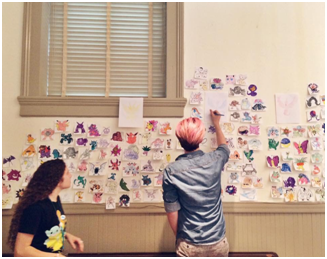 Avid's Caleb Zane and Rachel Kaplan tallying up the Pokémon to find the winner.

Amidst the general hype and inherent comedy, are there evergreen takeaways? If Pokémon Go was over already, what notes would apply to the next overnight sensation? Are there universal steps for taking advantage of a sudden fad? If so, what are they?

Caleb Zane, a bookseller at Avid Bookshop in Athens, Georgia, has an official bio that boasts an ability to “name every Pokémon based on their silhouette.” While he is adamant that Pokémon Go “is definitely not already over,” he believes the phenomenon’s biggest takeaway for booksellers and small businesses centers on the need for diversity.

“This kind of thing can come from anywhere,” Zane said. “Businesses, especially bookstores, always benefit if they promote enthusiasm, in all its forms. We are an industry built on the energy and goodwill of our customers and we should give everything they care about equal energy.

“Books contain everything,” Zane continued. “So we have to be willing to understand love for everything, too.”

Satoshi Tajiri, the creator of the Pokémon series, would certainly approve: he grew up wanting to be an entomologist and, as a child, hunted a variety of bugs to diversify his collection. As Pokémon encourages “trainers” to appreciate and seek out difference, so too, Zane argues, should hiring managers: “You should strive to have a diverse staff with a variety of interests, and to remain aware of current events in all spheres of popular culture.” Short of trying to be everything to everyone, he believes “the first priority needs to be surrounding yourself with a diverse crew of people.”

Celebrating diverse interests in a single fusion event, Avid hosted a successful crossover hour on Saturday, July 16, that combined Pokémon lures with the allure of coloring. Teams of children and teens competed to see who could color in the most of the original 151 Pokémon, to the tune of Pokémon’s 2.B.A. Master soundtrack — “an absolute masterpiece,” according to Zane. (It’s not just him: the album was certified Gold by the Recording Industry Association of America. It went platinum in Canada, Austria, and Switzerland.)

Appealing to customers’ diverse interests is a wise business decision according to the findings of recent Nielsen studies on the reading habits of consumer households. Social omnivores — those who are interested in many different kinds of entertainment, including books, games, and social media — provide booksellers with the biggest potential to grow their customer base, according to Kristen Mclean, director of new business development at Nielsen Book. “They are a powerful market and a good demographic for buying books,” she said at last month’s ABC Children’s Institute. 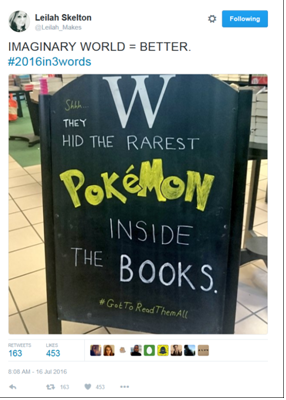 Melinda Beatty, a coloring master in the medium of chalkboard art and a bookseller at Curious Iguana in Frederick, Maryland, also emphasized diversity and the role it plays in representing a wide range of enthusiasms. “Our small staff is diverse enough that we’ve got our fingers on a lot of pulses,” Beatty said.

Even as she mused on successful sidewalk tactics, noting how “sometimes a laugh translates into foot traffic,” Beatty proved her own theory as an un-ironic Pokémon Go trainer herself — voting with her feet, so to speak, by playing for the fun of it. “I was just pleased that I caught a Jigglypuff on my couch this morning,” Beatty said.

For Cody Stuart Madsen, events and publicity manager for Book Culture in Manhattan, the takeaways of Pokémon Go have an extra sheen of grandeur. “More than a letter delivered by owl or a wardrobe into a new world,” said Madsen, “all my little brother and I wanted as children was to hear that scientists had discovered a way to make Pokémon real.”

Powered by nostalgia, Madsen focuses on cuing readers to escape into what they come to books for in the first place: to inhabit beloved stories. He encourages booksellers to frame customer engagement with Pokémon Go as “an extension, like Pottermore or Mugglenet,” a phenomenon that “builds on childhood experience to make a platform for Millennials and digital natives to continue living the story.”

“Pokémon is about the journey from novice in a small town to worldly expert,” Madsen continued, identifying a philosophical theme of forgiveness for strivers — booksellers, readers, and gamers alike. In true fan form, he offered the kind of existential thought that can only come from a sincere love of the game: “For book lovers, maybe there is a parallel to a bookshelf with books you’ve read and ‘plan to read’ and a Pokédex of all the Pokémon you’ve caught or ‘plan to catch’ as an extension of self.”

Zane offered his own closing nugget of philosophical wisdom, as lasting a lesson as any in a world of fast and viral fandom. “There is always folly in being a hater,” he said.