For the sixth consecutive year, Washington, D.C.’s Politics & Prose Bookstore and Coffeehouse will return as the official bookseller for the Library of Congress National Book Festival. 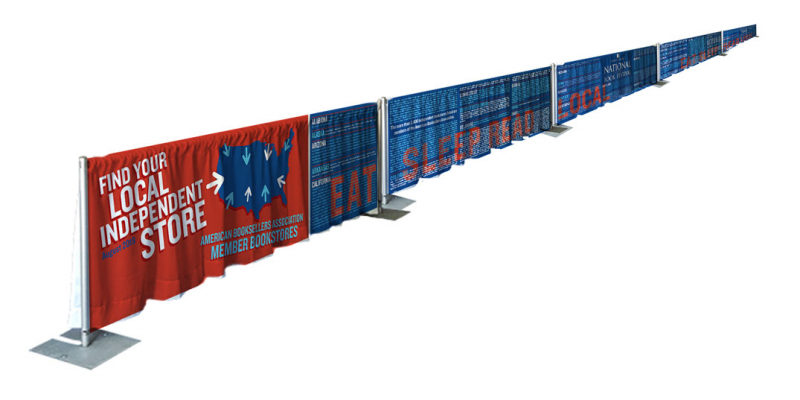 The conceptual design of the five banners designed by ABA, which will decorate the book sales area at this year's National Book Festival.

The 19th annual event, to be held from 9:00 a.m. to 8:00 p.m. Saturday, August 31, at the Walter E. Washington Convention Center, will feature more than 140 authors, poets, and illustrators discussing and signing their books. In 2014, Politics & Prose became the first independent bookstore to serve as the event’s official bookseller. The Library of Congress had previously worked with Borders and Barnes & Noble to sell titles by the festival’s authors, but P&P has done so every year since.

“To some extent we’re pretty accustomed to preparing for this, but at the same time it’s by far the biggest undertaking we do each year and involves an enormous amount of staff effort,” said Bradley Graham, co-owner of Politics & Prose with his wife, Lissa Muscatine, and vice president of the ABA Board.

“This year, the featured speakers number nearly 150, plus there are dozens of additional authors represented by a section of the festival called ‘Great Reads About Great Places.’ That’s the section that represents all 50 states plus Puerto Rico and the territories, and each of those entities gets to select one book representing them,” Graham said.

Graham said the store starts planning for the festival once the Library of Congress contacts them in June with that year’s details. This year, Politics & Prose is once again partnering with Ingram Content Group to handle logistics for the sales area, where festival goers will be able to buy new and backlist titles from the authors and have them autographed in an area nearby. Graham told Bookselling This Week that this year’s event features fewer authors than for the 15th anniversary festival in 2015, but there are a greater number of authors participating this year than in the past few years.

“All in all, if you also count backlist in addition to the featured titles for each author, this year we’ve ordered more than 350 titles, a total of more 22,000 copies,” he said, “so you see just how large a production this is. The Library of Congress is a key organizer behind this and they do a remarkable job of lining up these authors and putting on what each year is quite an entertaining show for people of all ages.”

Ingram helps P&P by processing the orders, gathering up all of the books, storing them in a warehouse, and then delivering them to the convention center a couple of days before the festival; they then help P&P put the books out on display and pack up at the end of the show.

In addition to having Ingram’s help, Graham will also oversee 70 Politics & Prose staff members who will operate the festival’s book sales area, to be assisted by members of the American Booksellers Association staff as well as publisher reps and local volunteers. As in prior years, ABA CEO Oren Teicher will be helping out, along with three ABA colleagues: IndieCommerce Specialist Ryan Quinn, Membership and Office Assistant Kate Brennan, and IndieCommerce Senior Manager Geetha Nathan.

In 2019, the book sales area will once again feature decorations specially designed by ABA to promote indie bookstores, which list the names of more than 2,500 ABA member stores and their respective cities and states. The decorations, said Graham, make it so “anybody looking can find a bookstore that is in the place they are interested.”

The banners, which will replace the wallpaper format used in years past, will decorate the perimeter of the book sales area. There will be five 10-foot by 3-foot, pipe-and-drape-style banners extending for 50 feet on either side of one of the store entrances, and shoppers will be given a flyer with the same design at checkout.

The store’s role at the festival has remained basically the same every year, Graham told BTW, but he finds that his team gets just a little bit more efficient at navigating the process each time. However, he said, they are still not immune to issues, including occasional miscalculations on ordering. It can be hard to hit the balance between ordering enough of each title so as not to run out, while at the same time avoiding ending up with dozens of unsold copies, Graham said.

“The trick in ordering for these large festivals is anticipating how many books will be bought as accurately as possible,” he said. “It’s hard enough, often, just guessing how many books will sell at a single author talk in your store, so imagine trying to do that for a giant festival with nearly 150 authors!”

Besides ordering the right quantities, Graham said booksellers who are looking into taking on bookselling duties for a literary festival near them should first recognize that each event is different. While P&P also helps with the Gaithersburg Book Festival in Maryland and a festival-type event for The National Press Club, the planning and execution processes for those events differ from the National Book Festival.

“I think in general it helps to allow at least several months of preparation and to clearly assign responsibilities to those staff members who are most involved,” Graham said. “In the case of the National Book Festival, it certainly is an advantage having an organization like the Library of Congress taking on the brunt of the planning in terms of arranging for the authors and securing the facility and handling marketing and publicity.”

More information about the National Book Festival can be found on the festival blog and the Library of Congress website, where the festival poster is also available for download as a PDF. Those interested in keeping track of festival news can follow the hashtag #NatBookFest.